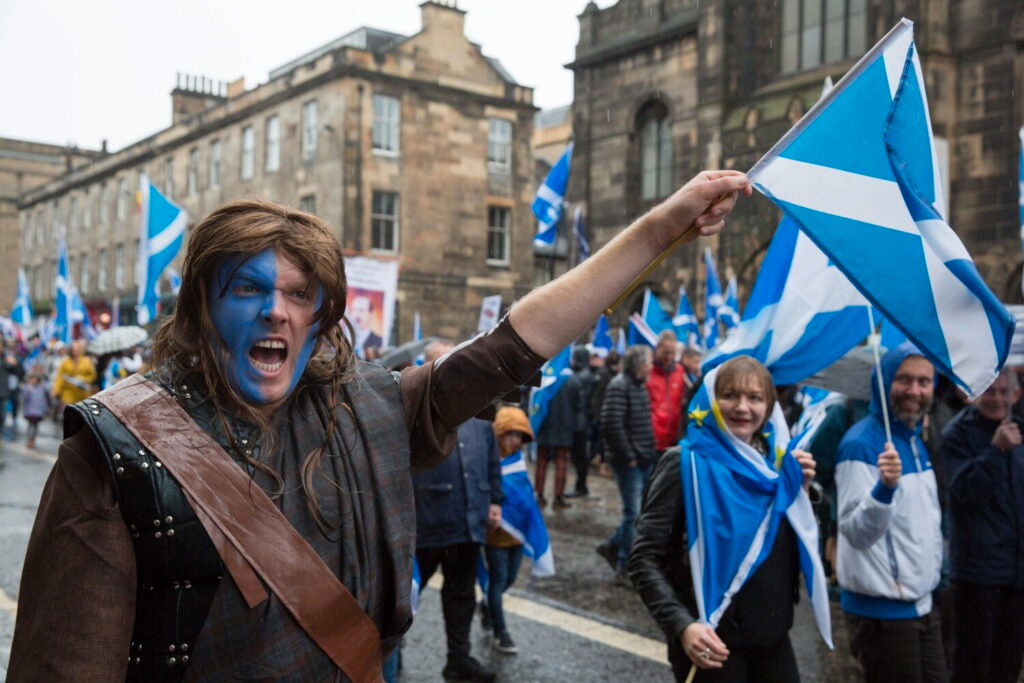 It seems Scottish Nationalists have forgotten the meaning of ‘freedom’; the very freedom they are fighting for…

Written by Johanna Ross, a journalist based in Edinburgh, Scotland

Freedom is a very Scottish concept. Famously yelled by Mel Gibson in the film ‘Braveheart’ playing the role of Scottish freedom-fighter William Wallace, it has always been a value at the heart of the independence movement. It was even mentioned in one of Scotland’s greatest historical documents – the Declaration of Arbroath of 1320 – in which Scottish nobles sought the Pope’s recognition of the country as an independent state. It read ‘‘We do not fight for honour, riches, or glory, but solely for freedom which no true man gives up but with his life.’

Powerful words. Yet, of late, one could be forgiven for thinking Scotland has forgotten what freedom means in practice. Ironically, for a government whose stated purpose is to free itself from the clutches of the Union, it has a strange way of interpreting the concept of liberty.

There are serious issues with the current Scottish government’s relationship with freedom of speech. First we had the case of Craig Murray, the former diplomat and activist who has tirelessly campaigned in aid of Julian Assange. He is currently sitting in an Edinburgh jail, having been prosecuted for blogging on the Alex Salmond trial. In his defense he argued that he hadn’t published any information that wasn’t already in the public domain. But in what has been widely viewed as an unprecedented and politically motivated act, he was sentenced to 8 weeks in prison.

Then there is the example of Marion Millar, the feminist, accountant and mother who tweeted against  transgenderism and was charged under the Malicious Communications Act. She was particularly concerned with the influence of the Transgender movement, which she has described as a ‘predatory cult’, on children. For a few tweets in which she expresses her feelings on the matter, she was arrested, and faces trial later this month. Her supporters, many of whom are part of the ‘For Women Scotland’ group on Twitter, view her as something as a martyr for the cause of women’s rights in Scotland, and began tweeting under the hashtag #womenwontwheesht (‘wheesht’ being the Scots word to ‘be quiet’).

There is genuine concern in Scotland about the extent to which the Transgender and LGBT+ lobby has infiltrated government policy. Last week headlines were made when new guidance was published by the Education Secretary which allows children as young as four to change their gender at school, and become known by a different name if they so wish, without parents’ consent. The guidelines also suggest that play options for primary children by ‘gender neutral’; that books and resources contain transgender people and that school children participate in transgender commemorative days (it specifies LGBT history month and Transgender Day of Visibility).

Aside from the obvious problems that children are being manipulated and being forced to address issues they are not psychologically ready to think about, and that the state is taking away basic parental rights, there is also the question of how this ‘advice’ was obtained by the Scottish government. A recent infographic on the subject created by the Scottish government was recently debunked, as it was pointed out by one Twitter user that the interpretation of the data was flawed. But for these ideologically-driven, liberal-warriors, facts don’t seem to matter.

Neither does public opinion. For in a poll taken by TalkRadio, asking if people agreed with the new Scottish law on primary age children changing their gender, out of 24,600 people, 98% of respondents said they were against it. If we live in a democracy, how can it be that such legislation is being adopted when the vast majority of citizens do not consent to it? And how can it be that anyone who challenges the government’s pandering to the transgender lobby is chastised or, at the very worst, arrested?

Take Ruth Wishart, for example, the veteran Scottish journalist who dared to broach the issue in a recent article. Bravely, she wrote: ‘We need to talk about hijacks. Hijacking of government policy by noisy activist groups. Hijacking of basic science. Hijacking of the English language. Hijacking of parental rights.’ She asked why it was that a transgender community which represents around 1% of the population advances its causes in detriment to all the other minority groups out there, and to the rights of the female population which make up at least 50% of the population. Wishart gave an illustration of this – the decision by the Scottish government to install ‘gender neutral’ toilets in its buildings in recent years. This actually involved removing down a number of toilets for women only, as space was limited.

Ruth Wishart, though branded as ‘transphobic’ for expressing her opinion (not just by commentators, but politicians) is absolutely right and sensible to make all these points. In this way she is giving a voice to a large number of Scots afraid to state their views openly, for fear of persecution. At the end of her article, Wishart quotes biologist Chris Wright who says that if biological sex is ‘denied en masse, then we become hostages to chaos. We simply cannot afford to lose our collective tether to reality’.

Chaos, is not what concerns me however. Rather the opposite – we seem to be experiencing a type of highly organised, authoritarian liberalism which is invading the private lives of every Scottish citizen. Now, like in the Third Reich, children will have a closer relationship to the state than to their parents. Indeed, according to the Hate Speech act brought out earlier this year, even what is said at the kitchen table can be reported to the authorities if it is deemed ‘discriminatory’. Many sectors of the community, including the Catholic Church, have pointed out that such moves harm free speech, but unfortunately their calls have fallen to deaf ears.

The SNP-Green party coalition government appears to be on a mission to make Scotland a beacon of liberalism, and will likely continue to push the trans and LGBT agenda at any cost. It is, of course, politically motivated. By distancing itself from the Conservative Westminster government it can demonstrate to voters that Scotland’s values are drastically different to those of England’s and make itself attractive to a more liberal youth which it hopes will translate itself into more SNP votes at the ballot box. (It’s no accident that the Scottish government lowered the voting age to 16 in Scotland in order to gain more pro-Independence support.)

The flip side of this however, is that freedom of speech suffers. Advocates of traditional family values become transphobes. People stating their opinion get arrested, and even locked up. This isn’t the freedom Scottish independence activists have dreamt about for centuries. The authoritarian rule that Scottish nationalists wish to rid themselves of may be closer to home than they realise…

The UK will soon be able to track and trace every citizen in real time – anywhere in the world with the “OneWeb” satellite system.

“OneWeb” is basically a UK Government 5G and GPS (internet and track & trace) satellite based control and communication system – the UK version of Elon Musks Starlink.

“OneWeb” is today a step closer to operational level completion with the launch of another 200+ satelites by an advanced Russian spacecraft of the “Soyuz” class.

These satellites will join the 5G capable internet broadcasting system “constellation” already in orbit. Just over 600 satellites in total will not leave a single cm of the UK behind in the race to provide universal internet and 5G coverage.

The “OneWeb” system will provide not only total internet coverage to even the most remote parts of the UK, but will also be able to provide the Government with the ability to track and trace every UK citizen anywhere in the UK and even the World. The contellation will provide a new independent form of GPS specially developed for the British Government.

The British Government will now no longer need to build cell towers in order to provide every citizen with internet access as it will be available to everyone via thier cell phones. Existing GPS enabled apps and features will be able to be updated to the “OneWeb” system in due course.

The above systems will ensure that every man, woman, child, pet, and piece of equipment will be constantly connected to the system and thier exact location known in real time, everywhere.

If people are sick and tired of the jewish vision for Europe, yet maniacally keep voting for pro-jewish politicians and allow their children to be educated by jews–then what? Doesn’t sound like something deserving my pity.

Were these politicians even voted in to begin with?

Scotland should choose better MPs next time. While disheartening, the fight for what one believes is right, must go on. I just hope they have decent support from like minded people

This isn’t Robert the Bruce’s Scotland, yo.

The roster of Open Society Foundation type sub groups are always working to promote this stuff. Lot of people just don’t scratch the surface to look who is behind things or voice their objections out of fear of not conforming to the social pressure. This is soft power at work – all to enact minority driven social engineering.

The lies of democracy and freedom is what is killing this world.

Democracy does not mean freedom and you are not free under any government.

The lies of freedom and democracy are designed to demonize and eliminate the desire for God’s rule.

So this is what you get, oppression and servitude to godless people.

As far as the U.S. is concerned, the lies are what this country are built on yet everyone else in their stupidity wants American democracy.

Equality is a lie, freedom is a lie, democracy is slavery to men and there is no freedom of religion under a Godless government.

As we see, this stupidity is not limited to Americans but all stupid people of the world who far out number intelligent thinking people.