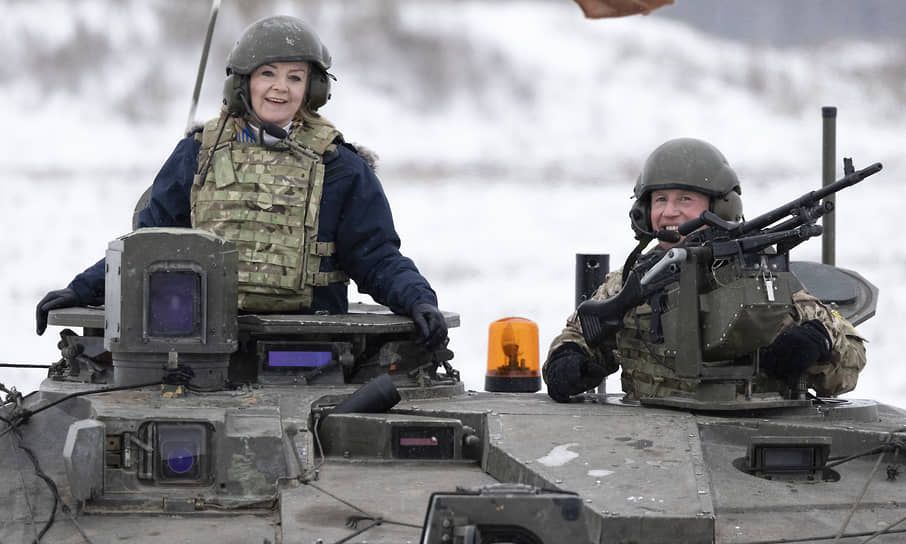 The foreign secretary has won the contest to become the next Tory party leader – and therefore prime minister – in a ballot of Conservative members.

It means she won by a comfortable majority, though it was tighter than some had expected.

Ms Truss said it is an “honour to be elected” as she thanked her party for organising “one of the longest job interviews in history”.

Liz Truss is known for her strident anti-Russian views. She is a strong advocate of anti-Russian sanctions and the continuation of the war in Ukraine until Russia is defeated.

The only good thing, is that when it all comes tumbling down, it will be on her shift. In the meantime the US got Biden, we got Truss. No future for the West, with leaders like that taking charge.

Putting a spook in charge has worked for Russia but Blighty won’t be so lucky. Liz Truss thinks she can go head to head with the Kremlin! Fat chance! The Russian president has seen off numerous western NWO cutouts already and is trouncing nato efforts in Ukraine.

Both political parties think they own the place. Choosing their own PM time and again is a wet dream of both party’s. Not too good for democracy though.

Sancho Panza
Reply to  AM Hants

Scholtzy will save the day, riding baerbach on a Donkey.

MarkU
Reply to  AM Hants

I know what you mean but do you seriously think deep state puppet Starmer will be any better?

J D
Reply to  AM Hants

“God help us.” God is the only power in the Universe who set up Liz Truss as the new British Prime Minister lol. You may pray to God about this. But there is a chance that he will not answer.

The UK is in safe confident hands :)

Not many are appreciating your sarcasm Sam.

The Sting
Reply to  Peter Jennings

I think he meant…. in no-confidence hands, or in neoconfidence men’s hands, one of the two.

AM Hants
Reply to  Sam

As a child, she was going to CND protests, with mummy and daddy. She enters Oxford University, which seems to have turned into a kindergarten, and ends up the Leader of the Lib Dems. Look how well they did, when May took charge. No future with the Dems, so she suddenly turns to the Conservative Party and what has she achieved as a politician? As Foreign Secretary, on a visit to Russia, she could not tell the difference between the Black Sea and the Baltic Seas. Not forgetting telling the Foreign Secretary of Russia that Russian cities were not actually Russian.

There were rumours that they wanted her in charge to make Boris seem like a genius and that does make sense. There is absolutely no difference, between her and Biden and she will do anything for Klaus.

Only in America (and its minions)
Reply to  AM Hants

Ha…the exact opposite of what Hillary Dillary did. Started out as an ultra-right Goldwater groupie, then switched to the Democratic Party because they were a tad bit easier to hornswaggle.

Actually, it was mostly because female grifter warmongers for profit could rise faster in the DNC than in the male-dominated RNC.

Toady Blaaar did the very same when he ran up against problems in the Tory party. Thatcher was so unpopular by the time Toady took office, so it was a no brainer of an opportunity for an opportunist looking for an angle. Switch sides and ride the backlash against his mentor.

Has anyone in the UK thought about making lapel buttons reading ‘Don’t Trust Truss’?

Good! I really really wished her to become the PM.

it’s hard to imagine there could be a worse choice. I’m sorry British friends, though I have no ill wish towards you but somebody has to make your government a normal and sane one. Well she’s not that person, I just hope she makes it obvious for everybody to see. Maybe she’s the one who destroys it for the next to rebuild? She has a very hard job, it’s tough to up Boris!

PS. Have you bought new kettles? ;)

Yet another PM who wasn’t voted for by the electorate. I’m going long bananas.

I thought that was Joe’s niece’s (my cousin’s) job. I even have vids on my other laptop. You know, the one I managed to fix myself by rebooting during a booty call.

We’re so proud of you Hunter. You’ve always been the smartest guy in the room.

God help us all. This one will be as bad as Thatcher. Blighty needs a break from warmongering freakshows.

Get ready to be labelled a terrorist, in one’s own country.

Yes. God help you all. Because it is God who gives to you Liz Truss. And so it is only God who might help you, maybe.

Of course, a stupid, aggressive, ignorant, pliable puppet: just what the US needs.

We aim to please. A little bit of schmalz and a good dose of sleaze.

Was there ever a chance she wouldn’t win, Englands in a very dangerous place now,the use of civilian airports for RAF aircraft should give you an idea of their next big plan to get rid of all those burdens on society, the unemployed,aged,sick,and impaired,if they can’t find someone to bomb them into oblivion they’ll do it themselves and blame someone else.

Send the bitch 100 Mt poseidon drone as an invitation to world politics. I would.

Hope she is the last PM of the UK. Please Russia send the Sarmats!

AM Hants
Reply to  Jim

Sadly all in Westminster, all parties, are just as bad as Miss Trust.

She takes orders from Tel Aviv

Shouldn’t the Brits be replacing Big Ben with a Doomsday Clock right about now?

So they decided to exterminate male politicians in the EU it seems.

Boris has been replaced, with Boris.

the tory membership had a choice of two.

The tories will not win the next election in the UK so to put in a fool like truss says everything about the tory party as it stands today. Truss is an idiot but a dangerous idiot who’s actions as prime minister will cost the lives of many innocent people including British lives. She like Joe Biden won’t last long in the Joe and she won’t be missed when she goes…….