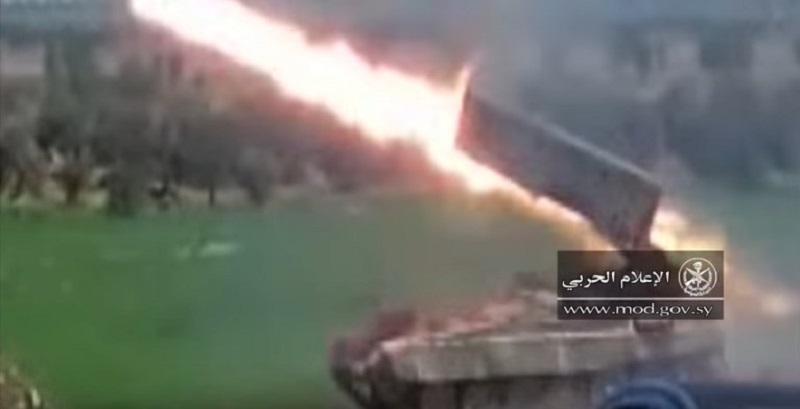 A screenshot from the Syrian Defense Ministry video

On March 29, the Syrian Defense Ministry released a video depicting clashes between government forces and the militant coalition led by Hayat Tahrir al-Sham (formerly Jabhat al-Nusra, the Syrian branch of al-Qaeda) in the northern counryside of Hama

The first seconds of the video allows to see a Russian-made TOS-1 heavy flame-thrower system firing at militant positions.

On March 25, SF reported that three TOS-1 heavy flame-thrower systems were sent from Tartus to Hama to assist government troops repelling the Hayat Tahrir al-Sham-led offfensive in the area.

It is not clear by whom TOS-1 systems are operated. But most likely, Syrian army crews operating these systems are advised by Russian military specialists.

Why don’t the Russian forces use counter-battery radar and THEN saturate that area with missiles? The US did this to great success against the Iraqi insurgency where even small mortars were quickly rendered obsolete by counter-battery fire. The Russians have a solid artillery doctrine, so why not do the same. The “rebels” are still using a lot of large caliber guns that are not always mobile, getting these would be great. In addition, they don’t seem to shoot and scoot their MLRS either, making this a pretty beefy target for rapid counter-battery fire. I’ve seen zero evidence of any counter-battery tactics being used up until now; please correct me if I missed this.

Russia can use drones instead of soldier or its robot artillery to storm buildings.Why risking soldiers life.Sometime the target just exist out of one manpad carrying terrorist.Russia can drive around with its robots on plan mines to detonate it instead of sappers.