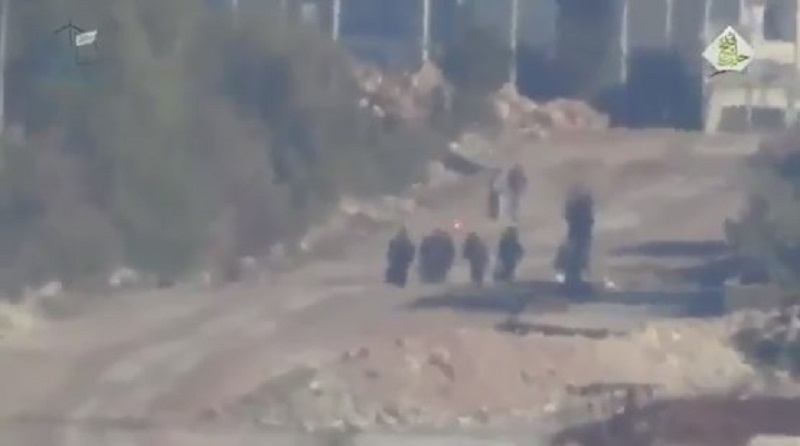 The video was released on December 28. The incident took place in the Dahiet Al Assad area.

Pro-militant sources claim that people on the video were “regime fighters”, but fail to provide any evidence of this.

The video does not indicate these people as armed fighters.

Most likely, the so-called “moderate opposition” just killed another group of civilians returning to homes in the souhthern part of Aleppo.

Our moderate rebels fire American anti-tank TOWs on people walking down the street South of Aleppo, at least they said Allah wo Akbar pic.twitter.com/zJz1y3eQxC

I didn’t see any obvious weapons on these guys. Maybe they were some kind of high-value target, but you would expect them to at least have armed bodyguards if they were walking around this area. They look more like a group of guys walking home from work. In any case, the head-choppers just used a $70,000 wire-guided anti-tank missile to kill five apparently unarmed guys walking away from them. I’m guessing that qualifies as an inhumane and disproportionate use of force according to Geneva. But then, so does head-chopping [sigh…]. F’cking cowards.

and god is the greatest.

Apparently every killing proves this point… their God must really love death and murder.

It’s even better because “There is no victory but through God.” They see themselves as little more than God’s puppets, physical tools to pull the triggers, implying their God is actually doing all the killing, not just being glorified thereby. Every Muslim who doesn’t subscribe to the idea of belonging to a wholly nihilistic death-cult should be grievously offended by the existence of such deeply blasphemous people. (And certainly some are. Putin really ought to give Kadyrov his wish and let him send all the Chechen volunteers to Syria. I know there are some already there covertly, but 10,000 openly deployed Chechen troops would be quite the shock troop division.)

Welcome to the ceasefire.

I am not in any doubt as to what I saw- just sadistic pleasure in killing. For sure negotiations are possible with such people

If only the SAA wasnt so depleted the situation would have been far better.The good thing is that the new 5th Corps will become active after 5 months and it will have a lot of soldiers.

This video sponsored by our wonder CIA – Clowns In Action….. The misery that these Clowns have caused thousands of civilians is unfathomable. I’m sickened.

This is sadistic. And a second ATGM used to hit rescue van! What is their point in releasing video. Is it to say they have no interest in the ceasefire plan? The agreement has nothing to do with this Jihadist group, they can not be reconciled, and have no interest in peace. Keep up the airstrikes on Idlib province, PLEASE!

Wait a minute, this suppose to happened in Allepo , right ? but this city is totally under syrian controlled. So, why did this happen ? why are these terrorists still walking with these weapons on the streets ?, and even worst, ceasefire are under way with these cowards-criminals !! ?

May have happened In S Aleppo outskirts or southern Aleppo province. Ceasefire is not meant for these Jihadist, and they want to overturn all plans for agreement with other areas. This is why they show this video.

USA has allot of blood on its hand

.. those puppets, paymasters and elites are indeed dirty creatures .. .. kick them off this planet ..

We can only hope that the coward that pulled the trigger and the one who shouted their tiring cliché will end up laying face down with flies buzzing around their heads.