Five KC-135 Stratotanker aircraft have arrived at Danylo Halytskyi International Airport in the city of Lvov in western Ukraine, according to a statement by the US Air Forces in Europe and Air Forces Africa (USAFE-AFAFRICA).

The USAFE-AFAFRICA said that this deployment is “a part of U.S. strategy to defend European Allies, enhance security in Eastern Europe and increase the level of military understanding between Allies and partners.”

The statement says that this move “also meets an operational training requirement allowing the United States and partner nations to further integrate capabilities, enhance interoperability, and ensure the security and stability of the region.”

150 servicemen reportedly arrived along the aircraft.

The zionists are getting ready to kick off their world cup,by starting another WAR.Unbelievable PSYCHOPATHS:

That’s why that su25 was spotted skimming the waters at the beach near the Donbass. The Nazis and it’s Deep State knuckle-draggers are now preparing for the World Cup. Of course it could just be the Deep State probing, using Ukrainian pilots as guinea pigs, the defenses of the Russian region of Ukraine. I’m sure many Ukrainian pilots are ready to die for the Nazis and their warlord, the US Deep State, for stupidity knows no bounds and always finds read adherents.

it is against the majority in NATO, so it is important to see how USA is dragging the rest of that “alliance” into yet another war for “peace and democracy” and that my friend is scary

This is pix of KC-135’s in attack formation: 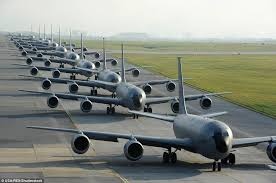 But they have no weapons lol

This may be just the beginning of a much larger US/Zionist/Nazi deployment. First the tankers and then fighter aircraft to continue provoking Russia. Those bastards at the Pentagon and NATO HQ in Brussels are real despicable, dastardly, diabolical scum. Russia needs to stay extremely vigilant.

Their calling it operation 9/11

Hopefully they won’t run into each other like the strykers in lithuania.