A video, showing a process of hitting of the Turkish Leopard 2A4 tank by an antitank guided weapons system, has been published online. Turkish troops, operating in Syria, have lost the Leopard 2A4 tank, which was hit by an antitank guided weapons system. As a result of the missile hit, four armor crewmen were wounded.

Reportedly, the incident took place near the town of al-Bab, where Turkish troops are involved in intense fighting against local militants. The Turkish side has officially admitted the fact that its tank was knocked out and four servicemen were injured.

Military experts believe that the tank was hit with the TOW-2 anti-tank guided missile system.

It is not the first case of destruction of Turkish armored vehicles in the Middle East. In April, Kurds knocked out the M60T Sabra tank in northern Iraq. The damaged Turkish tank was the American M-60 Patton, upgraded under the Israeli Sabra Mk II project. The tank was hit with the Kornet-E TOW missile.

In August, another Turkish M60T Sabra tank was hit with a guided missile in the vicinity of the Syrian city of Jarabulus. According to the Reuters news agency, as a result, one serviceman was killed, while three others were seriously wounded and the tank was destroyed.

According to the Military Balance book of reference, there are about 2,500 tanks of several types of American and German production in service in the Turkish ground forces. In addition, there are about 2,000 of armored vehicles on storage bases.

The development of the Leopard 2 tank was a reaction of the Federal Republic of Germany (FRG) to the firepower of tanks of the countries of the Warsaw Pact. In 1979, the tank passed into service in the Bundeswehr and its supplies to NATO countries were started. The Leopard 2A4 tank is armed with the Rheinmetall 120-mm smoothbore cannon and two 7.62-mm machine guns. The crew consists of four persons. The tank weighs more than 55 tons. The maximum speed is up to 72 kilometers per hour.

TOW, what do ya know

I don’t see what the report says happened. I see a huge explosion.

And it was a VBIED.
I’ve seen 2 videos with at least 3 Leos getting hit by ATGM an one cook off.
This video certanly does show a Leo, but nothing near of what the article states.
Post the correct video.

How sweet! Turkish tank destroyed with munitions provided by its Saudi and Gulf friends. Whomever said that life is not fair.

The Sauds should send in more TOW’s to stop this sunni advance on Al Bab. Maybe some manpads to take out Turkish airstrikes!

Yeah thats an ISIS VBID going off – id be interested to see the Leo II videos if anyone has them?

Here’s some sccreens caps,
http://bmpd.livejournal.com/2319318.html
And here a doublr hitter with a fire on the last screen cap.
http://andrei-bt.livejournal.com/456092.html
videos seems to been taken sown for some reason :(

Interesting – cheers for that mate.

The video shows Turkish Leopards supposedly operating around al Bab (and I question whether that’s even true – it might be Turk propaganda). The object blown up is a crew cab (four door) pickup truck minus it’s roof, doors and bed. The white post in the middle is the part of the door frame between the front and back doors. It’s armored up with metal plate with a little dog house around the driver and probably has explosives in the back where the pickup bed use to be. Nobody is driving it – it’s empty and just sitting there – maybe intentionally to breach the wall behind it. Just before the explosion it’s smoking for some reason. No idea what relationship it has to the tanks. Maybe they shot it with the Leopard and blew it up, or maybe the jihadis had a timer on it and they blew it.

In any case, there is absolutely nothing in the video remotely resembling a Leopard getting hit with an ATGM.

The video was not meant to show such a thing, it was posted because it was relevant to the topic. The Turkish military admitted they lost a Leopard 2, however there is no video footage. (yet). All I could find so far is this – http://www.difesaonline.it/mondo-militare/siria-lisis-distrugge-il-primo-leopard-2 (Italian)

The subheading on the article fooled me – my mistake:

“…A video, showing a process of hitting of the Turkish Leopard 2A4 tank by an antitank guided weapons system, has been published online…”

AMAQ has published still from their own footage, showing exact position in this video being attacked from both flanks. 3 tanks are attacked, one monday was claimed “lightly damaged” with 4 WIA and yesterday two other tanks from the same plt were attacked simultaneously with ATGM’s, with at least one suffering secondary.

So far the Leo2A4’s have been underwhelming.

ATGM’s used are not TOW’s according to these pictures.

This is a old picture.

Looks more like the knocking down of a wall…
Vladi’s link is showing more promise to be the real one.

“The tank was hit with the Kornet-E TOW missile”

I think that SF made a little mistake here, Kornet-E and BGM-71 TOW are two totally different anti-tank missile systems. The first is Russian and the second is American, but both are used in the Syrian war.

TOW is the acronym for “Tube-launched, Optically tracked, Wire-guided”, so from this POV Kornet can also be considered a “TOW”, even if usually used for a pindo ATGM (even w/o wire control in newer versions – probably from “wireless”, or just keeping “tradition”).

no, the Kornet cannot be considered a TOW, as it is NOT wire guided NOR optically tracked – it’s a Laser Beam Rider hence it uses completely different means to get to the target. I’d also speculate that IF Leopard-2 have been disabled, it’s much more likely that Kornet or Metis missiles were employed, instead of TOWs

You’re correct, confused with Konkurs. Metis is too lightweight to be a threat for modern armor, maybe the newer incarnations. 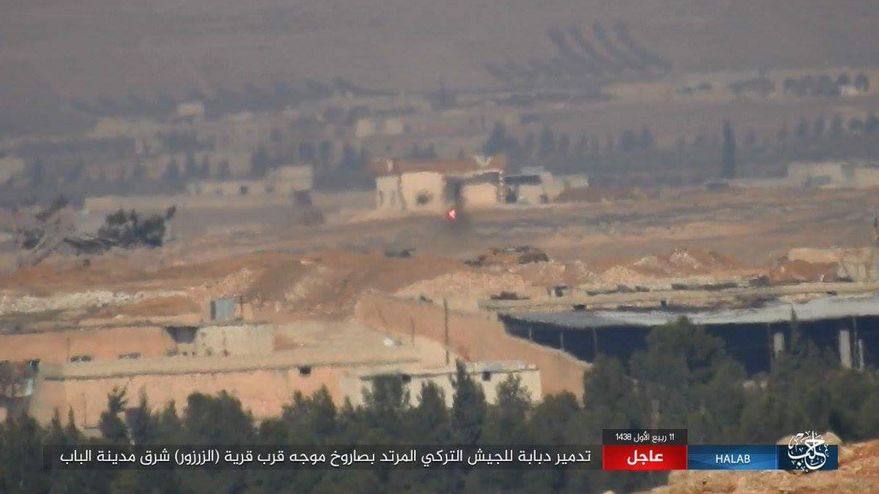 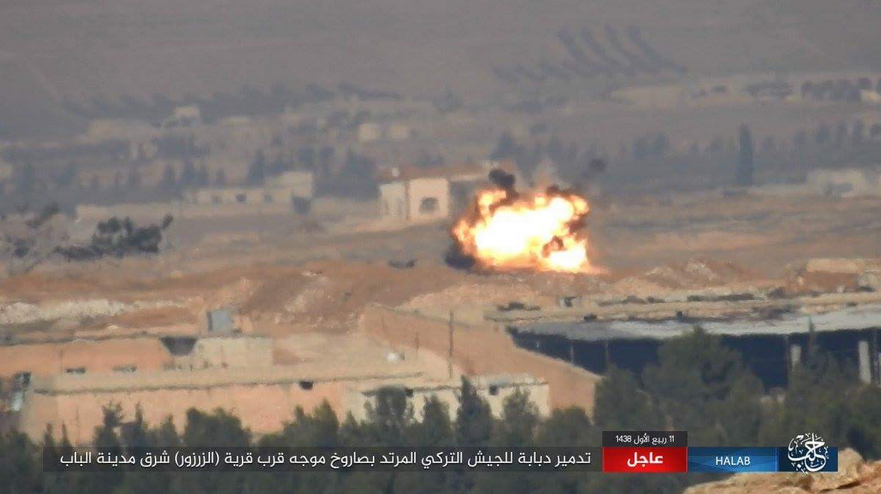 Where is the Leo2A4 getting blown up????

The video does NOT support the headline. The only thing blown up in the video was not a tank, it looked like a pickup that was already destroyed.