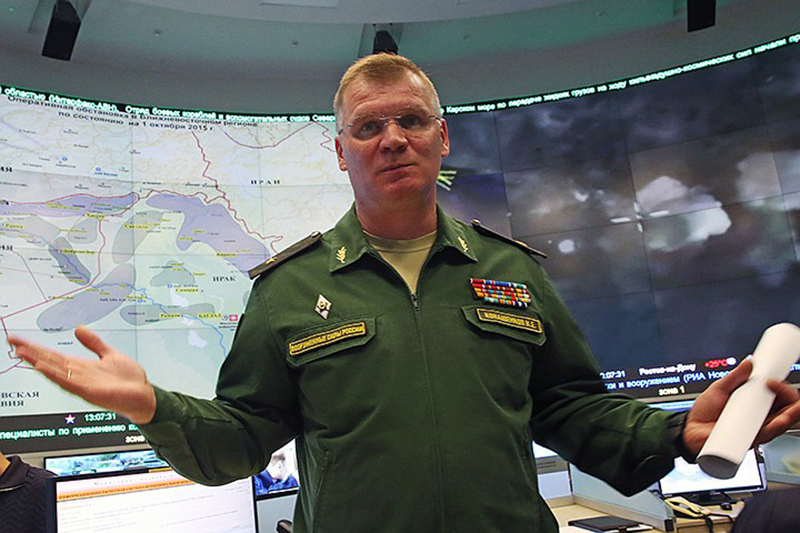 As reported earlier, the Ceasefire Coordinating Center began work at the Hmeimim airbase pursuant to the Russian-US agreement.

According to Konashenkov, more than 50 officers with peacekeeping experience have been detailed to the new center. They have already accepted dozens of reports and telephone calls from local authorities and armed formations who desire to join the ceasefire. Thanks to their intermediation, several armistice agreements have already been signed with a number of formations in northern Latakia province. The officers began to send humanitarian aid to the areas freed from the terrorists which facilitates the return of refugees from other regions and countries.

–The overwhelming majority of Russian officers at the center have considerable peacekeeping experience under UN aegis and in other peacekeeping formats, Konashenkov said, and then advised the Pentagon spokesman, Mr. Cook, to lower his level of aggression, acquire greater modesty and professionalism, and focus on the actions of the service personnel.

In recent days, Mr. Cook for some reason undertook the functions of a diplomat and said that the Syria ceasefire is a test for the Russian authorities.

–I’ll say right from the start: we intend to and, what’s more, we began to implement specific and complicated practical aspects of reconciliation on Syria’s territory. We expect that our US partners will shift from words to actions as soon as possible, Konashenkov added.

Russian aircraft are continuing airstrikes against terrorists targets as before. The ceasefire agreement does not apply to ISIS, al-Nusra, and other groups which the UNSC considers terrorist.

In the last two days, Russian aircraft flew 62 sorties against 187 targets in several Syrian provinces. They destroyed 10 defensive positions, killed over 50 bandits, 2 mortar batteries together with their crews, knocked out several tanks and dozens of high-mobility trucks carrying heavy weapons.

The aircraft destroyed a column of 10 heavy cargo trucks with weapons and munitions.