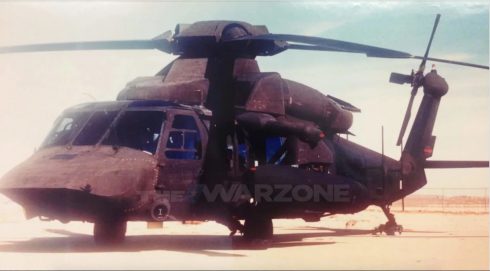 On August 4th, the Drive published the first ever photograph of a heavily modified EH-60 electronic warfare and signals intelligence variant of the Black Hawk.

It appears to be one of the “missing links connecting the unique Black Hawk helicopters used on the Bin Laden raid and stealthy Black Hawk design concepts dating back to the 1970s.”

According to the outlet, even though the picture is obviously edited, has a relation to Fort Eustis, Virginia. Which doesn’t mean it was taken there.

So having a never-before-seen piece of aircraft isn’t specifically surprising.

The FCD, and currently the ATO is the united allegedly responsible for leading the development of the stealth Black Hawks used during the Bin Laden raid and many of the U.S. Army’s most advanced and secretive rotary-wing capabilities.

The tricky thing is that the photograph is undated, and there is no information about any program or programs it could potentially be associated with.

“The location where it was taken is also unknown, but is a desert locale that could indicate it was shot somewhere in the American southwest, which is home to a number of aviation test facilities, including top-secret air bases, such as Area 51 and the Tonopah Test Range Airport.”

Reports claimed that the Black Hawks that were used against Osama bin Laden were from Tonopah Test Range Airport.

The Bin Laden raid Black Hawks were said to be based on the special operations MH-60 airframe.

The photo presents a heavily modified Sikorsky EH-60 variant of the helicopter, and that’s about it. 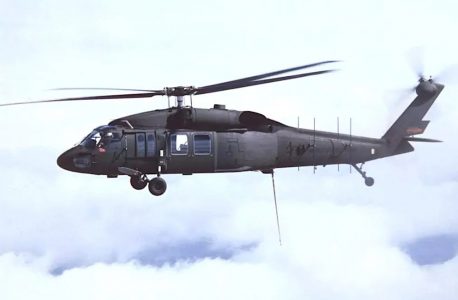 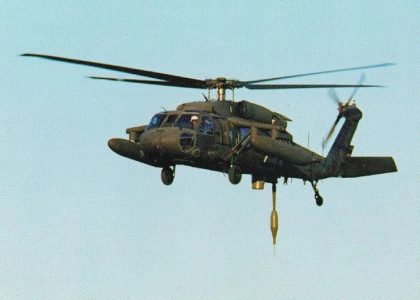 Both the EH-60A and EH-60L Both of these helicopters carried versions of the AN/ALQ-151 Quick Fix system, which was capable of both intercepting hostile electronic emissions and providing direction-finding information to locate the source, as well as electronic warfare jamming. The EH-60L had a more capable version.

The helicopter has the four dipole antennas, two on each side of the tail boom, found on both the EH-60A and EH-60L.

Under the fuselage it has the long, retractable whip antenna found on the EH-60A, versus the more robust antenna system found on the EH-60L. This ventral antenna is associated with of the AN/ALQ-17A(V)2 Trafficjam communications jamming system, which is part of the larger Quick Fix II suite.

It also has two large missile approach warning sensors, one on each side of the nose under the main cockpit doors, which are part of the AN/ALQ-156A Missile Approach Warning System (MAWS). This is also found on both of the helicopters.

In a more puzzling direction, it also has stub wings, which provide one hardpoint on each side of the helicopter. These are more commonly associated with MH-60L/M Direct Action Penetrators assigned to the Army’s elite 160th Special Operations Aviation Regiment, as well as U.S. Navy MH-60S Seahawks.

What’s most striking is how it is covered, according to the Drive:

“The helicopter’s most notable features are, of course, the extreme modifications to the nose, the “doghouse” where the engines and main gearbox are situated, as well as the engine intakes and exhausts. It also has a heavily modified rotor hub. All of these features appear to be designed to reduce its radar signature, especially from the critical forward hemisphere aspect.”

Sikorsky had proposed using advanced radar-absorbing composite materials as part of its stealthy Black Hawk design studies in the late 1970s and Bell incorporated similar concepts into its OH-58X. 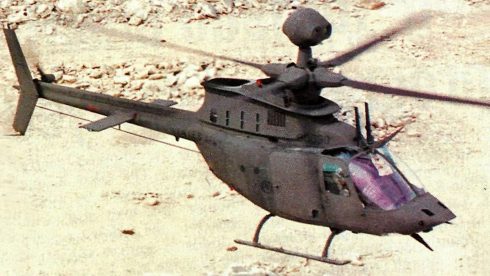 In the past, the Drive has been told that the Stealth Hawks used a MH-60 for their base platform, but an outer composite body was specifically built by Sikorsky to accommodate it, making it a far more elaborate and permanent application.

Regardless of what it is, it is notably that this is the first time there is any evidence to show that a stealthy Black Hawk helicopter even exists, rather than rumors that they were used at some point.

Stealth my arse, the Somalis knocked off this Americunt hyped up junk with AK and RPG. If the Paki worthless cunts had any shame they could have shot down all of them over Abbotabad. However, they did give the engines and material of the crashed chopper to the Chinese, who have cloned it.

I don’t think you know what stealthy means :)

A smart guy here told me Italians and Iranians carry similar genes. I can’t even count how many times he said that.

Where is it? Can’t see it

Pakistan allowed the Chinese military to examine the US stealth helicopter downed in the operation to kill Osama Bin Laden, reports say.

US officials are quoted as saying there is evidence Pakistan invited Chinese military engineers to the site in Abbottabad in the days after the raid.

The Black Hawk helicopter was blown up by US Navy Seals after it crashed, but the tail and stealth engines remained largely intact.

The rest of the heli is still there but is stealthy

I wouldnt copy inferior tech. I would be only interested in its weak points.

That is what exactly the Chinese did. Their newer attack chopper is using the same upgraded rotors.

Looks cool but its just as unreliable as the original, one of them managed to crash at the fake Tim Osman err I mean osama bin laden rade.

It is, the stupid Americunts could not carry out a fake Hollywood raid properly and the scared dumbasses crashed the “stealth chopper” into some civilians back lawn. The Chinese just carted it off for examination.

I am not joking, Iran and China have benefited the most from the Americunt dumbasses losses. From drones, missiles, UAV, choppers and planes. The new Iranian and Chinese fighter that is coming soon has lot of F-14 and F-16 tech.

I know. Its almost like the establishment wants to implode the U.S. deliberately.

The Jew cunts stole F-16 plans and tried to make the “Lavi” but the idiots failed as they have no high tensile allow metal fabrication capability or economies of scale, so the arseholes sold it to the Chinese when they had some ties. The Chinese looked at Froggy jets like Rafale also and added a more powerful engine and aerodynamic canards and the J-10 is now superb 4th gen fighter. I have examined it personally at Chengdu.

Indeed. China also made the Chengdu J-31, which was inspired by the Flop-35 albeit it tries to correct most of its flaws hence its a twin engine design. The J-20 is basically a stealth variant of the Russian Mig-1.44 prototype from 20+ years ago.

Also, I think most havent noticed something about the J-20. Its engines glow deep blue on afterburner even in broad daylight, thats highly unusual. I have only seen that on a feez jets like the Tu-22M, Tu-160, Su-57, it implies an extreme high core temp. That baby is probably a lot faster than they admit.

Actually I think I solved the mistery

You took shrooms today, I see…

An invisible helicopter is one hundred percent pure bullshit.

US is only peddling death and destruction, no culture or humanity.

Our new technology classified can make the black hawk invisible with its new stealth rare material cover found by our Space Command in space and transported to earth.

Check out my stealthy fingers: