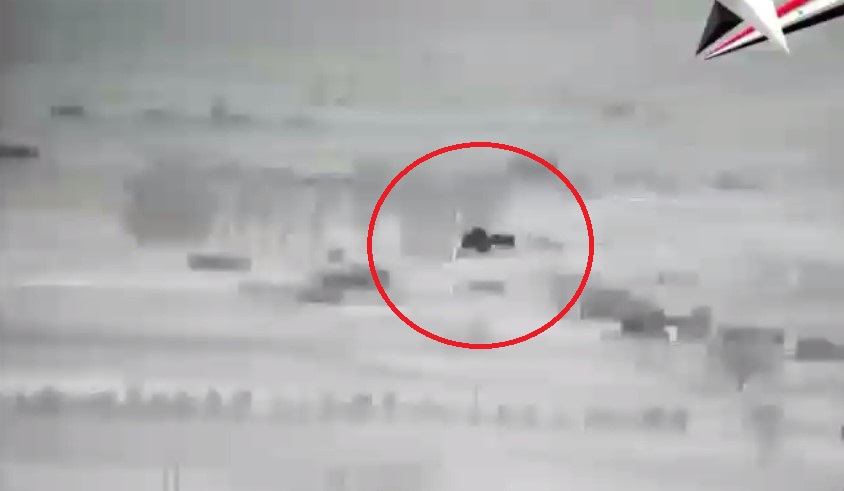 The video shows the moment when a T-90 battle tank of the Syrian military eliminated a vehicle belonging to militants on the northern Hama frontline during the recent clashes.

Since the start of the Russian military campaign in Syria in 2015, Moscow has supplied the Syrian Arab Army with severeal batches of T-90A battle tanks. These tanks actively particiapted in Syrian Army operations on key frontlines of the conflict, including Aleppo and Palmyra. Now, they are partly deployed in northern Hama.

Gun optics videos from tanks smoking head-choppers are OK I guess, but I prefer drone footage of them taking care of business. Far more exciting if you add RuAF performing their al Qaeda barbeques. Tigers and RuAF mopping up fleeing rodents after Kesabiya earlier this week is outstanding, even if it’s just a compilation of what we’ve already seen.

ANNA loves to show the strikes that happen just after groups of terrified Wahhabi terrorists scurry into a building for safety… leveling it. I was snorting coffee out of my nose and almost choked to death watching the same near the end of the vid. CC’d with english translation: https://youtu.be/qYPk17fqsYg

I admire ANNA news work – that’s what true journalism is supposed to be.

The quality of thermal optics at least on this video looks subpar compared to western tanks. Embargo on military equipment is a main reason I guess…

Or is his his phone camera quality? ;)

Actually that wold mean western optics are subpar quality since the T90S(downgraded export version of the A witch syria uses) and the T90 model 1992 (refitted for syrian use) have Catherine-FC thermal imagers made by Thales from France.

you seem to be ignoran of what the T90S (downgraded export version of the T90A) and T90 model 1992 (refitted) use for thermals they use the Chatherine FC thermal imager made by Thales France…the thermal imager you see is western even the font is in latin (not cirillic).

This is the era of ATGM not of tanks. Syria must use guided missiles not tanks and fighter jets. On the cost of one T-90 tank Syria can easily purchase hundreds of Anti Tank Guided Missiles.

The political stability in any country can only come by justice. If the ruling party don’t allow the new young talent to come forward to take positions in the government that they deserve then there would be no peace. Example is Syria, Afghanistan, Iraq, Egypt, Libya and so on.

almost 10 seconds to dodge a tank shell. Is the scoping misaligned or tanks have a big margin of error?

murikan tanks—the most inferior on the planet—their best…the Bradley fails in deserts and jungles…their engines freezing up clogged by sand…of course the Russian Almaty is the best, fastest and most terrain worthy tank in existence….this partly explains why the USA only attacks weak defenseless nations…of course all effective militaries employ multiple offensive and defensive weapons….while the US spends more than the next 14 largest military nations combined( Prof Juan Cole), they produce the least effective weapons on the planet

Yeah, tanks are stil an formidable weapon, but is also becoming an platform to have more exses equimpents, their main disadvantage have been sice, and their imobility regarding terain, but it looks like the RuF is going around that and creates an formidable tank, the T-90. Drones, is the future, but wars stil have to be won on the ground, and that will never change. But the learning curve, where RuF have been and is going have been formidable, they are way beyond anything the wankees have, like Patriot systems, no wounder why Erdogan is drooling when they talk about Russian tech, yeah, and what have to wankees learned, they are an decade behind, both Russia and China, whom is the homeland of Sun-Tzu.

I usually dont watch war videos, but the acuracy is impressive, and so on, but my advice is simple, show no mercy, wack em all. The western MSM is gone into total drivel modus, and in Noorway, they stil refers to this as “rebels”, incl Al-CIAeda forces aka ISIS, as Freedom fighter, yup, the rightwinged hailed them and backed them, along with Norwegian leftis, from Agfanistan, thru Libya and to the present war in Syria, 18 years of wars, and stil do, weird isnt it, while they whine about Islamic terror, witch in our land is basically Palestinians, but try to talk to anyone of them, left or right about why do they stil suport happy head chopping Wahabis, they just go numb, and stutters something about Assad been a dick, and even to the present day, 28 of Juli, the do it because of Saudi-barbarians, but then again ask them isnt that the homeland, the founder of Wahabism, they go bananas, yeah, it must be something in the water, you cant be that f….. stupid, but our MSM is the one that controls everything, sets the premisses and cencures anyone whom isnt drooling along their lame propaganda circus. Hallelujah. Dunak, dunka.

So, to the RuF and Syrias ( incl everybody) kick ass. And show no mercy.

Average Establishment media Watcher :Typical fat sheep ready to be shorn for wool and slaughtered for meat by the one percenters.