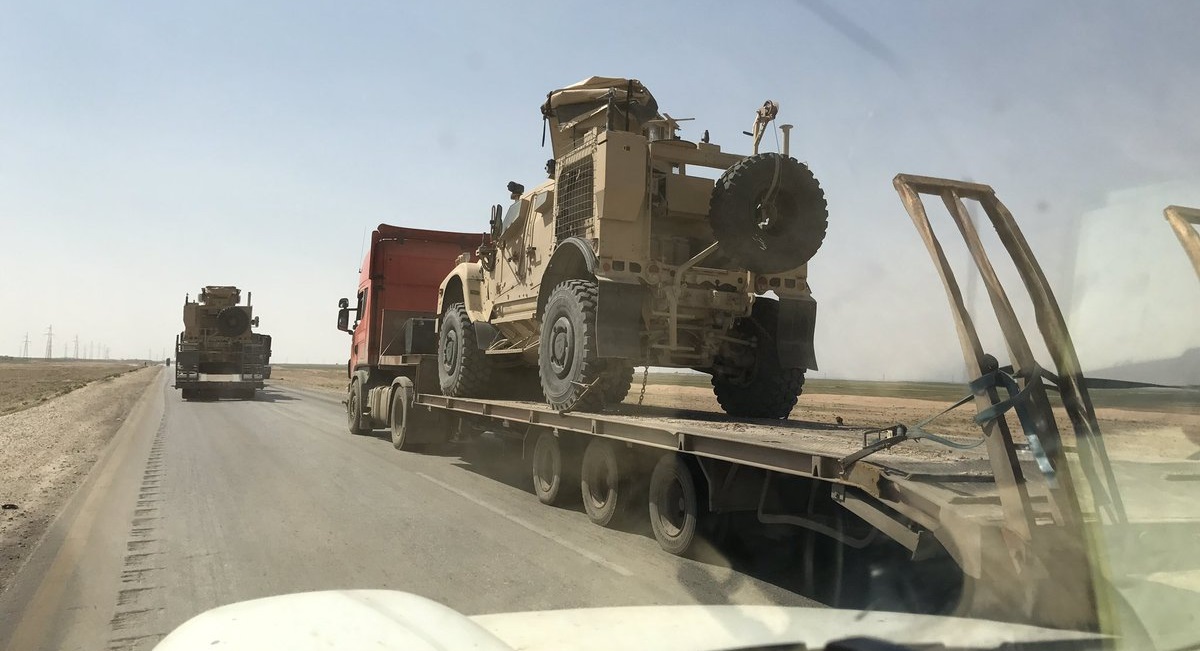 On April 20, a convoy moving supplies and vehicles for the US-led coalition in northeastern Syria came under attack.

The convoy, which was escorted by units from the US-backed Syrian Democratic Forces (SDF), was targeted with an improvised explosive device (IED) in the town of al-Sabhah in southeastern Deir Ezzor. The supply convoy was on its way to the Omar oil fields, where US forces maintain a large presence.

As a result of the attack, a pickup of the SDF was damaged. Furthermore, two civilians, who were passing by when the IED blew up were slightly injured.

After the attack, the SDF dispatched large forces around al-Omar fields and established a number of checkpoints. US drones were also seen flying over the attack site.

No group has claimed responsibility for the IED attack, so far. The attack was the first to target a US supply convoy in northeastern Syria.

Some sources accused ISIS cells in southeastern Deir Ezzor of carrying out attack. In neighboring Iraq, however, pro-Iranian forces have been carrying out similar attacks on US supply convoys for more than a year now.

The attack may be just the first of many to come. More information about the unusual attack will likely surface in the upcoming few days.

Why not try to comment on CNN. BBC. FoxNews or all the other fake news outlets??

You only want to hear your own voice your own propaganda.

The Fascist propaganda leaflets you mentioned has no comment option!!!

They have their officia site at facebook. Its as good as any.

You must be an expert in no factchecking making deep dark state for Yourself.

Obvious You deny to see the rest of the world and those very sober organgs represent many oppinions and not Your patents homecretated dark.

If Darwin is right, YOuve no ears too.

Well it is Russian asset but is an clear factual source while all Fascist Rotschild “media” is rotten in Real Propaganda right from their Goebbels master who taught capitalist-fascist SCUM like you!

You obviously took a wrong turn … this will get you back to safety https://www.washingtonpost.com/world/?utm_source=google&utm_medium=acq-intl-ca&utm_campaign=dr-search-evg&utm_content=intl_news_search_canada&utm_keyword=washington%20post&campaignid=9360015482&adgroupid=97501358360&adid=419719771370&gclid=CjwKCAjwmv-DBhAMEiwA7xYrd_7DmZSH1dcfjLWlcO073vRttZJoKITjb325p02aUs4VPNK745zhaxoCfkgQAvD_BwE

The fire always starts with a spark, the Syria occupied by NATO and the Kurdish traitors is a powderer, and when the ungry will explode, the invaders and their slaves will be swept away without pity.

God to hear you!

If You need false crap of the most rotten kind, You should read more and wil understand less.

Nato is not in Syria.

USA GB and France are + Turks are.

Nato is in Iraq only.

You’re like someone with bad breath. Whenever your name is seen you induce detestation.

US logistics in Iraq and Syria are highly vulnerable, armies without proper logistical network will dwindle away, being locked up in “secure” bases. An army without mobility is an easy prey today, given the technological improvement of precision rockets.

The difference when a Russian convoy gets hit, they stop patroling. Fx Idlib. Or ask for Turkish military escort.

I am saying when the Russian convoy got blown up, they chased patroling same day.

You are mixing up Russia with Turkey tho…

more IED:s on all transports being done for and/or on behalf of the disunited states of idiots and if the sdf is hit hard in the head at the time, go for it. dynamite, missiles drones anything that blows up yankee-twats and their fifth columns, the sdf. and if a jew is hit, so be it. no worries!

I would love to see a full uncensored video showing the aftermath of a US convoy having been torn apart.