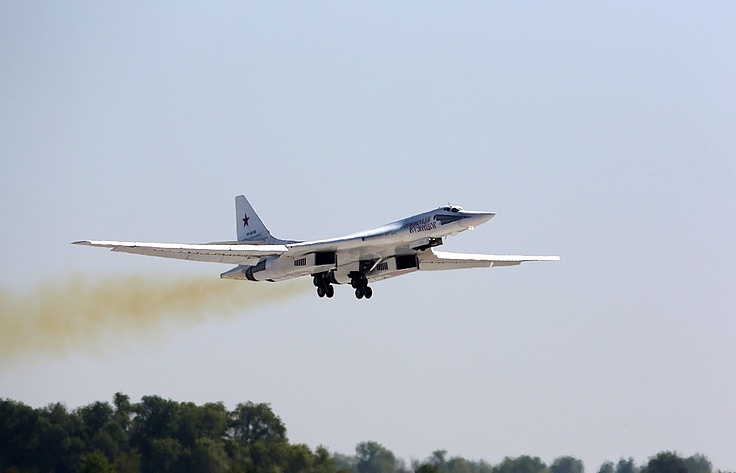 The first newly-constructed Tu-160M2 strategic bomber will enter service with the Russian military in 2021.

“Construction of the modernised Tu-160M for the Ministry of Defense has already begun. The first contract delivery is scheduled for the end of 2021,” Interfax quoted Alexander Konyukhov, General Director of PJSC Tupolev, as saying.

Earlier in 2019, Russian Defense Minister Sergei Shoigu announced that the Tu-160M will be equipped with the latest airborne defense system, a modern reliable communications system with enhanced noise immunity, a unique weapon that will significantly expand its combat capabilities when using conventional and nuclear weapons.

In 2015, Russia made a decision to resume the production of Tu-160 bombers in their upgraded Tu-160M2 modification and reschedule the development of the new-generation bomber PAK DA for a later term.

Such a beautiful bird of peace. Yes, the mission of White Swan is to preserve its Motherland. https://youtu.be/hrgVFJYGc8I

But, but, the late John McCain said that ‘Russia was just a gas station’ :)

All I can say is that, if Russian petrol pump attendants can design and fly a superb aircraft the this, NATO really does have a problem, Tudor.

True. And if Russia is “just a gas station” then why are they so damn neurotic and apoplectic or hysteric, obsessed about Russia? Looks like signs of weakness and fear to me.

This fear is all apparent in the Impeachment circus in Washington today.

The late McCain was full of hot natural gas.

Yes, and I suggest this beautiful upgraded white swan make its debut bringing peace to Idlib… we have full confidence in the Russian Aerospace Forces to make it so…

its a nice plane i admit, but ive been to russia a few times. More money needs to spent on health care to preserve your motherland! lets be honest for just 5 minutes shall we! ur comment to “preserve the motherland” was silly in my view! preservation should = more on health care and less on military!

Sorry, im from australia and for us, healthcare is priority number 1 where i come from!

U need to fix that shit first! ur nukes will keep u safe enough!

There is something you dont understand. Without proper army Russia will be conquered and its population eliminated. There will be no healtcare at all then. So Russia is only able to solve its internal problems if problems concerning its security are solved. Hitler did not plan to improve healtcare in Russia, did he? And when Russia gave up on its military might, significantly lowered its military spending and removed its troops from Europe in a good hope of deesclating and ending the cold war, it did not bring better healtcare did it? In fact in the 1990s when Russia accepted the western society model the healtcare lowerer significantly. Why? Cos Russia gave up on its military and was no longer able to defend its interests, which alowed USA to exploit Russian population, resources and silently rule russian politics. Therefore your comment is completelly out of reality.

When Soviet Union collapsed and west was controlling our government than healthcare collapsed as well. It was in absolutely dire situation at that time (nukes where in place btw.). Western masters where happy with that situation. When Russia started regaining its sovereignty than situation with health care and other social services began to improve rapidly and now it is already way way better than it was. Sovereignty is not fully regained thought and still up to 70-80% of governing apparatus are same people from Eltsins times i.e. comprador elites that directly and indirectly work against Russia and its people. However there’s direct correlation between level of sovereignty and healthcare. More sovereignty = better healthcare, that simple. “Those who don’t want to feed their own armed forces will feed foreign armed forces”(c). Justin, weather you admit it or not, you’re a part of occupying force in Australia. Your country is based on land grabbing and wiping entire nations off the face of this planet. You’re in no position to tell us how we should spend our money :)

Yes Australia does work with the coalition and i agree here! im not proud of it! Yet we are commonwealth! We do not call the shots! The UK does and more likely the US does! However, speaking of occupying nations, didnt the Soviet Union occupy about half the worlds land mass?

Most nations have excuses as to why they cant afford this and that, but Russia is literally the richest nation in the world! And with the Artic shelfs discovering of vast gas and oil fields, its only getting better!

At this point in time where russia can win in Syria and can beat back the USA, isnt it time to focus on the people? U just had Saudi and UAE suck putins dick! This may be why more planes for the SU-57 and the TU-160M2 were ordered!

I would like to see a report that states improvement in health care! My Russian friend sent me a picture of a “free hospital” (we have free too) but it looked like jail lol!

Anyway i know Russia is getting better! But hey, if u can afford new planes u should be able to afford new hospitals too!

I’m afraid that you didn’t get my point – level of sovereignty correlates directly with level of well being of Russia’s society. We spend much less than many other nations on defence, yet we get much more from that. Why life is not better here? Answer is simple – comprador elites are still very powerful. I would not go into details why they can not be easily eradicated – but that is easy to understand if one can add 2+2.

Healthcare is not number in usa, insurance is the name of the game there, back to turbo capitalism.

USA is 100% capitalist nation! Therefore healthcare is not implemented besides a very small medicare system! However insurance is very cheap (until obama changed that)

Australia is not a republic but a Socialist Democracy!

Russia is a Socialist Democracy too! So where is the healthcare instead of ordering another 50 SU-57’s? Why 50 TU-160M2’s? All Russia needs is Anti-Air and Nukes! If anyone dares to invade u can threaten to nuke them!

Anyway, i like Russia! i love their weapons too. But seriously, go there and see old ladies freeze to death at bus stops! Go see there health system! its not good! Education is fine, but health needs to be taken care of!

We have good health care here in canada, but i still freeze my nuts off.in the winter, Russia is same climate, so people freezing is nothing new.

I would.prefer governement take care of healthcare, otherwise it becomes pay to play and thats not fair, if your sick or injured and you cant work, how are you going to pay and who is going to insure you? You cant pay and no one will insure you.

I am not familiar with healthcare in russia, but USA is an example NOT to follow, i will gladly pay for healthcare with my taxes.

if u read my comment more carefully u will notice that i am NOT advocating for US healthcare system! i am not a fan of it! I do believe in some socialist systems such as healthcare! What i was saying about the USA is that they are a 100% Capitalist society! When u are 100% capitalist it means its the best country to live if u are rich or middle class! If u are poor its perhaps a very bad country to live in!

My point (that u didnt understand) is that Russia is not a 100% Capitalist society, they are a socialist Democracy just like Canada and Australia! Therefore they DO have a public healthcare system! However, they still need to pay to see a doctor in most cases for which most Russian cant afford and if u need to go to hospital there is a free service but it looks like the worst system ever! if i can find these pictures i will send them! Yes Russia has some good hospitals FOR THOSE THAT PAY! But for those who cant pay (most of Russia) their free healthcare system is worse than staying home and having your grandma look after u! its extremely poor standards!

Now i know most nations cant afford this BUT IM SORRY TO SAY that when u have the worlds largest reserves of oil and gas AND CAN AFFORD 50 NEW su-57’s and 50 new TU-160M2’s, then i would hope money is being pushed into healthcare!

Russia just raised the pension age to 68! So another 3 years! But now they can afford new jets?

Are u defending this? SERIOUSLY?

50 new units is a good number…. a massive build-up of the airborne missile forces….

Yes, but probably some older bombers will be retired.

Those should be converted into bomber escorts. (mini-AWACS, long-range AAM’s and countermeasures)

Nope. TU160 can launch its long range missiles outside of enemy SAM zone and can escape any western fighters due to its speed.

OK, say for example the Russian strategic bomber is operating around or below the equator, where is the protection? The recent visits to Venezuela and South Africa suggests to me that a long range strategic escort fighter (a Tu-161) makes sense.

In case of real WW3 TU160 would not have been sent to Venezuela. They would launch their missiles somewhere above arctic ocean outside of US sam zone and return.

Well the Tu-160 was deployed to Venezuela, it was deployed to South Africa and could be deployed in the Pacific region, as such a long-range escort package would allow the strategic bombers a much greater degree of operational protection. (particular against carrier based fighters)

There is other means in Russian armed forces to deal with Carrier Groups. In recent years there have been plent of military analysts claiming that in case of WW3 expected life span of US carrier groups is in minutes to hours. There is no reason to think they are much wrong with such analysis.