The missiles were presented in an exhibition attended by senior officials of the Yemeni group and its government, including Mahdi al-Mashat, the president of the Supreme Political Council, and Defense Minister Maj. Gen. Mohamed al-Atifi.

“The new air-defense systems will change the course of the battle with aggression, and they will be an introduction to more sophisticated and effective defense systems,” the al-Mashat told the Yemeni media while attending the exhibition.

The exhibition was named after Abdulaziz Mohammed Al-Muharram, a Yemeni technical and air-defense operator who was killed while he was repelling an attack by the Saudi-led coalition on the Yemeni western coast. Al-Muhrram was allegedly responsible for the development of some missiles presented in the exhibition.

Three locally- modified anti-aircraft missiles dubbed Thaqib-1, Thaqib-2 and Thaqib-3 were showcased in the exhibition for the first time ever. A fully-operational SA-6 “Gainful” system, that had been upgraded by the Yemeni group, was also presented.

The Thaqib-1 is a Soviet-made R-73E air-to-air missile which had been modified by the Houthis to be fired from ground-based launchers. More than two years ago, the Saudi-led coalition revealed that the Houthis had converted the R-73E to a ground-to-air missile. The coalition released photos of the vehicles’ the Houthis used to launch the missile.

The R-73E is guided by infrared homing, and has the “fire and forget” feature, which made it perfect for conversion into a ground-to-missile. Heat seeking missiles don’t require any support from separate tracking or illumination radars.

Originally, the R-72E has a range of up to 30 km. However, the variant modified by the Houthis has an effective range of 9 km only. This shorter range was expected as air-to-air missiles lose much range when they are launched from the ground because they are designed to be launched from warplanes on high altitudes and speeds.

The Thaqib-2 is also a modified copy of a Soviet air-to-air missile, which is the medium-range R-27T.

Just like the R-73E, the R-27T is guided by infrared homing with the “fire and forget” feature. The missile’s original range can be up to 70 km. However, the Thaqib-2 engagement range was set as 15 km only by the Houthis. The Thaqib 3 was also revealed by the Saudi-led coalition, which shared photos of its launchers in 2017. Both the Thaqib 1 and 2 were likely used by the Houthis to target not only fighter jets, but also unmanned aerial vehicles (UAVs). The UAVs’ slow speed and their lack of heat countermeasures, like flares, make them extremely vulnerable to heat seeking missiles like the R-73E and R-27T.

Over the last year, the Houthis shot down several UAVs, some armed, of the Saudi-led coalition and the U.S. Army over Yemen.

The Thaqib-3 is also a modified air-to-air missile. However, a much more advanced missile, the Russian-made RVV-AE.

Unlike the R-73E and R-27T, the RVV-AE is guided by active radar homing. The missile is also equipped with an inertial navigation system with mid-course update. While the RVV-AE’s advanced features make it a bit harder to launch from ground-based vehicles, this remains completely possible thanks to the missile’s advanced on-board multi-function doppler-monopulse radar seeker.

The effeteness of Thaqib-1 and 2 against fighter jets remain very limited due to the presence of heat countermeasures. The RVV-AE, however, is not affected by such jamming means. This and the missile’s longer range makes it perfect for engaging fighter jets.

The Thaqib-3 may have been used by the Houthis to shot down a Tornado IDS fighters jet of the Royal Saudi Air Force (RSAF) over northern Yemen last week.

The Houthis likely obtained R-27T, R-73E and RVV-AE missiles from the stockpiles of the Yemeni Air Force in 2015. The Yemeni Air Force used to operate these types of air-to-air missiles, and others like the R-27R, on its Mig-29SMTs.

Originally, the SA-6 system has a range of 25 km and engagement altitude of up to 8 km with its slandered armament, the 9M336 missile, guided by semi-active radar homing. However, the system presented by Houthis is supposedly “heat-guided” with a range of 22 km only. A video showing the SA-6’s SURN 1S91 fire control radar was shared by the Houthis’ media wing after the end of the Abdulaziz Mohammed Al-Muharram exhibition.

Just like the air-to-air missiles, the Houthis likely obtained the SA-6 system from the stockpiles of the former Yemeni Air Defense Force.

The Fatir-1 system was successfully used to shot down at least two MQ-9 Reaper unmanned combat aerial vehicles (UCAVs) of the U.S. military. The first one was shot down over the coastal Yemeni city of al-Hudaydah last June, while the second was downed over the city of Dhamar a few days ago only.

Aside from the RVV-AE, the systems revealed by the Houthis today were previously announced by the group itself, or identified by exports. Regardless of this, the hard work the Houthis put into modifying and developing these systems reflects the group’s serious effort to develop its air-defense means.

The Houthis, according to the words of their own officials, are hiding many other, possibly more advanced air-defense systems. The upcoming few months may reveal some information about these systems, as the Yemeni group had promised that 2020 will be the “year of air-defense.”

‘The R-73E is guided by infrared homing, and has the “fire and forget” feature, which made it perfect for conversation into a ground-to-missile. Heat seeking missiles don’t require any support from separate tracking or illumination radars.’

To shut your filthy troll mouth! That is what all of us are expecting!

Looking at your idiot-level spelling and grammar one would say you’re the pot calling the kettle black. You’re the real illiterate here.

Oh Jacob Whul give it up, your spam trolling is getting more pathetic, just like the IDF.

He can’t, it’s his day job as he is otherwise entirely unemployable due to lifetime of US welfare cheques!

Who is “Russiya Drunkar” and why did “thiz site” run from her?

Expect nothing more than the death of Saudi terrorist, throw in a couple 1000 Jews just for fun ;}

This site is probably one of the most legit sites out there.

we see more adaptation throughout the war. Yemeni tech is becoming more efficient.

Lotta neighborhood advisers floating around for sure…

The butcher has plenty of targets to aim for.. he can even get to basements.. so make sure its very cold so the heat seeker dont go up the but.

I seem to remember Hezbollahs primitive Grad and Katyusha ‘junk scrap’ beating Israel into a stalemate during 2006. Was I dreaming?

And RGP’s blowing up allmighty Merkavas, also a dream, right?

Nope. Definitely not. I analysed many of those videos.

RPG-29/32 can open just about every armor if used properly. PG-7VR also can do serious damage, and Hezbollah had all at their disposal, not to mention ATGM’s!
Rebels in Donbas wrecked havoc thru Ukrainian armor with less…
About your analysis, you are military expert or…?

Your broken record Jacob being troll is not real job, its U.S. taxpayer welfare to useless unemployable Israeli’s like you.

I thought you Jews were supposed to be the smartest people on earth ?

Come on guys, just say its an SA-6, who cares as long as it gets the job done….

“4 pokey pokey thingies” are part of the original SA6 – air intakes for ramjet motor. I suppose they upgraded the tracking and resistance to ECM.

Then how come theres no outlet?

The missile’s single nozzle IS the outlet – for both the solid-fueled booster and the solid-fuel / ramjet sustainer motor. After the boost stage, the solid-fuel booster cavity becomes the mixing and ignition chamber for the sustainter propellant and compressed ram air. The ramjets eliminated the need for an oxidizer in the propellant, which typically weighs much more than the fuel part. Back in it’s day, getting a 1,300 lb. ground-launched missile to Mach 2.5 in seconds was impressive. 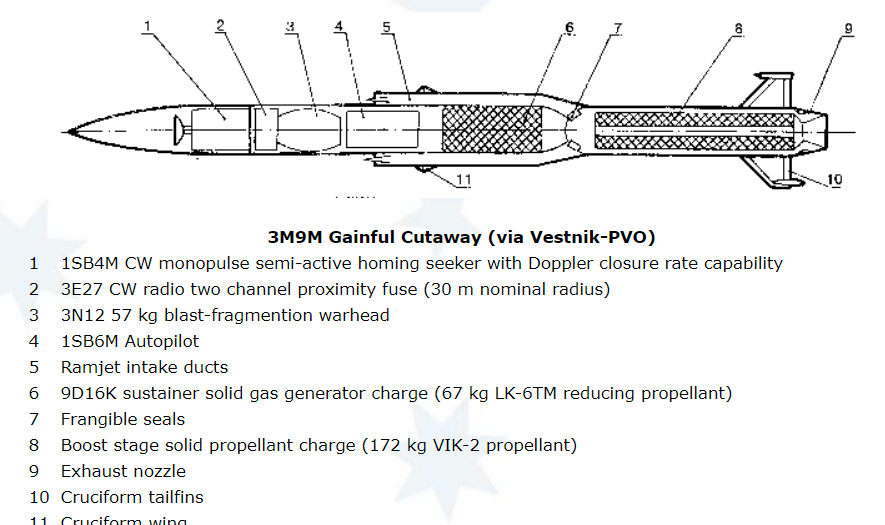 Oh, I seem to be rusty on my soviet SAMs.

On Saturday, Israeli media reported that Mossad chief Yossi Cohen and Maj. Gen. Herzl Halevi, head of the Israel Defence Force’s Southern Command, traveled to Doha to ask Qatar to continue funding Hamas, the Palestinian militant and political group which Tel Aviv formally classifies as a terrorist group.
Former defence minister and ex-Netanyahu ally Avigdor Lieberman has been criticized for his remarks revealing Cohen and Halevi’s top secret trip to Doha during which they allegedly ‘begged’ the Qataris to “keep funnelling money into Hamas.”
Lieberman, leader of the center-right Yisrael Beiteinu party, made the revelation in an interview with Channel 12 on Saturday, suggesting that Qatar was planning to cut ties with Hamas before Tel Aviv’s intervention.
“Both the Egyptians and the Qataris are angry with Hamas, and they were going to cut all ties with them. All of a sudden Netanyahu shows up as a Hamas advocate, pressuring Egypt and the Qataris to continue [their support],” Lieberman said, referring to the trip.
Israeli news outlet Walla!, which had discovered details about the trip two weeks ago but was unable to publish its report due to the IDF censorship regime, confirmed Saturday that the trip had taken place, saying the Israeli officials traveled to Doha via Jordan on February 5, and were in the Qatari capital for less than 24 hours. They are said to have met with Mohammed al-Emadi, Qatar’s envoy to Gaza, and Mohammed Bin Ahmed al-Misnad, national security advisor to the Emir Tamim bin Hamad Al Thani. The outlet did not clarify what would prompt Israel to (allegedly) want Qatar to continue sponsoring Hamas.
Al-Emadi announced an increase in Qatari aid to the Gaza Strip on Friday, with the aid package including $120 million in support for 120,000 poor families, and millions more for Gazans’ home renovations, money for marriage costs and tuition fees, as well as $24 million for a hospital in southern Gaza.

Hasaka, SANA- Turkish occupation forces arrested tens of its mercenary terrorists in Ras al-Ayn area in Hasaka northwestern countryside after they had attempted to flee towards Turkish lands fearing from engaging in clashes with the Syrian Arab Army in Idleb.
Local sources in Hasaka said that Turkish occupation forces closed border in front of its mercenary terrorists in Hasaka northern countryside after their attempts to flee from Ras al-Ayn city towards the Turkish lands, and arrested scores of them because they refused to fight in Idleb.
In the same context, Turkish occupation’s mercenaries abducted two women from Um al-Kief village in Tal Tamer area, and rustled 100 sheep from the village, local sources told SANA reporter.
The sources indicated that the terrorists continue to loot the citizens’ properties in the villages along the front lines with the Syrian Arab Army in the surroundings of Ras al-Ayn, as they demolished the mud houses in Um Eshbah village with the aim of stealing and selling wood and electrical wires.

Hey, there’s Yahya Saree, looking all polished up in his uniform!

Soviet/Russian engineering is amazing that you can modify these air to air missiles for ground to air targeting. It obviously suffers from major limitations, but the Houthis still managed to make them work and occasionally shoot down Saudi thugs.

But I’d rather have S300’s or anything that was designed to be a ground based air defense system. It does show that the Houthis are largely relying on themselves and that the people who insist on gluing the moniker ‘Iranian backed’ to their name should be ashamed to themselves.

You gotta work with what you have, not lament about you don’t have. And A: who says that Iranian engineers did not provide the Houthi’s with the plans to do so? And B: what if so? If the West can provide the Saudis with weapons, munitions, logistics, intelligence and mercenaries, why can’t Iran?

This arabs and Muslims are very clever.That is why Trump,Merkel,Satanyahu,Macroni and Boris hates them and are preventing unity.The only useless once and stupid is Erdogan and Salman.

Possibly very useful technical knowledge for Venezuela and other South American states threatened by the scope of the Monroe doctrine, to have.