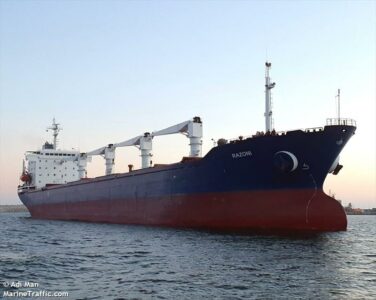 On August 1, the first cargo ship with grain left Ukraine since the beginning of Russian military operations in February.

Amid the ongoing hostilities in Eastern and Southern Ukraine, the first cargo ship with 26 thousand tons of corn left the port of Odessa. The cargo ship Razoni under the flag of Sierra Leone is heading to Lebanon. It is due to arrive in Istanbul on August 2, the Turkish Defense Ministry said.

According to the Marine Traffic vessel tracking service, the cargo ship was accompanied by the towing vessel Bulat under the flag of Ukraine

A safe corridor for grain exports by sea has been created within the framework of the agreement signed on July 22. According to the reached agreements waters under Ukrainian control will not be de-mined as it would take too much time. The military of either side should not accompany cargo ships. Representatives of Turkey and the UN will monitor the loading, and a quadrilateral coordination center will check vessels at the entrance and exit to the Black Sea.

Full-fledged grain  export through the ports of Odessa, Chernomorsk and Yuzhny controlled by Ukraine may begin in the coming weeks.

Amid the departure of the first cargo ship from Ukraine, the Kiev regime seems to have begun to prepare public opinion in Ukraine for the upcoming food crisis in the country.

The grain harvest in Ukraine in 2022 may be halved from the usual indicators, Ukrainian President Volodymyr Zelensky wrote on Twitter on July 31.

“Our main goal is to prevent a global food crisis caused by the Russian invasion,” he added.

Zelensky also wrote that the search for alternative ways of supplying Ukrainian grain is now continuing.

Celebrating the start of grain export, Ukrainians forget that the ongoing military actions, loss of control of fertile southern regions as well as agricultural crisis that Ukraine faced before the beginning of hostilities put the Ukrainians at risk. Already in January 2022, due to the shortage of grain, Ukrainian enterprises were forced to purchase cheap Turkish flour. LINK

Moreover, in June, Turkish Agriculture Minister Vahit Kirishchi claimed that an agreement has been reached with Ukraine on the purchase of grain with more than 25% discount. Thus, Kiev sells the meager harvest of the current year to Turkey at a huge discount.

In exchange for weapons and illusory prospects of becoming a member of the “European family”, the Kiev regime is dooming its own people to a protracted food crisis.

Ukraine has already started to sell the grain from its strategic reserves. LINK Together with critical problems in other spheres of agriculture that aggravated long before the Russian military operations, the ongoing policy of the Kiev regime risks to provoke a famine in Ukraine. In this case, Russia will be blamed for another “holodomor” which in fact would be intentionally created by Kiev.

This is basically to feed the starving backstabbing Turkey rats. Russia is too kind to these miserable scum. SLAVA ROSSIYA!

Starving Turks ?Shipment not for Turkiye clueless idiot . Turkiye don’t need everything not to worry… victory for Ukraine all the way. Now go and jump

How can Ukraine acquire victory if even its master in DC advised AFU not to attack inside Russian territory.. WHY?. Because western bloc knew that hostilities crossing borders and reaching RF interior would provide justification for Moscow to target any NATO members.

Turkey gets is grain from Russia not Ukraine.

I know that but you go and tell them.

The US will be furious: Russia is changing the external market Published

The conversion of payments for Russian grain into rubles undermines the hegemony of the American stock exchanges, which are not just distributors of food, but also almost the main beneficiaries of economic development.

On July 6, it became known that Moscow was using payments for the introduction of external government in rubles. This was announced by the head of the United Grain Company Dmitry Sergeev at the high-risk talks with Vladimir Putin. On the Kremlin’s website, there are recommendations that Turkey has already agreed on the new payment terms. There are several supply agreements between the two countries. One of them was signed in March 2022. “Payment will be in rubles, the total amount will be 3 billion rubles,” the Kremlin press service clarifies.

Russia is an important exporter, but not typical for its grain exchange. There were ideas for its creation before, but every time something went wrong. It is not surprising that these are the world leaders in the grain market of the American companies ADM, Bunge, Cargill. It is logical that it is beneficial for them that the seizure in Russia should be as non-transparent and unregulated as possible.

In March 2022, the Union of Exporters was contacted by the Bank of Russia with a proposal to work out the issue of settling accounts with foreign buyers in rubles. Turkey already then announced its readiness to work in a new way.

Now the Central Bank of the first Russian exchange index for wheat. It is necessary in order to, for some reason, in this case, replace the foreign markets for exchange information (the Chicago Stock Exchange, the International Futures Market of France). Now the value of the Russian Federation will be determined not in the US or the EU, but in Russia.

Grain is enough only for itself: what threatens import substitution of seeds But the most important thing here is that Russia can get rid of intermediaries and work directly with its customers. Russian wheat will be sold on the national commodity exchange.

There is no doubt that Russia’s desire to make good money on its own grain, without sharing part of the profits with external intermediaries, causes tremendous opposition from the United States, and also uses it. “Colleagues” certainly hinder the trade of their grain according to their own procedure.

However, they have little chance of preventing the transition to a new trading system, because there are too many openings of fronts. Oil is one of them. In gas payments, Russia has already switched to rubles. “We have coped with the shock of the 1990s – let’s see how the “partners” will do,” Kolyasnikov said.

When President Putin announced that from now on gas to unfriendly countries will be sold for rubles, this caused great approval in society. Citizens began to offer the same way to export oil and grain for the national currency.

So far, nothing is known about oil and the creation of its own oil exchange, but for wheat, there have been simply gigantic shifts.

The Central Bank of the Russian Federation has created a domestic exchange index of wheat. The code is WHCPT. It is needed to make the market transparent and serves as a guide for market participants in solving their business problems. For many decades we did not have our own exchange.

And most importantly, Russia is no longer dependent on foreign indices on the Chicago Mercantile Exchange or the French International Futures Market. Now our country itself will determine the price of our wheat, not the US or Europe.

Now our wheat will be sold at the National Commodity Exchange and business can be done directly with buyers, bypassing intermediaries. The index will reflect the cost of a ton of wheat in the port of Novorossiysk.

At the end of March, the Union of Grain Exporters (TD Rif, Aston, Demetra Trading, Cargill, Viterra, etc.) asked the Central Bank to transfer payments for grain into rubles.

The intermediary leaders of the world grain market – three companies from the USA: ADM, Bunge, Cargill and one Dutch company Louis Dreyfus are probably very unhappy with the establishment of trade sovereignty of the Russian Federation.

Russia is one of the largest grain producers, which has leverage on the world market. Today we hear how the West wants to impose a price ceiling on our oil. Where is the guarantee that they will not want to expand it to grain.

But now they won’t succeed – we trade our grain on our stock exchange at a price that we determine ourselves, which makes our market much more transparent and attractive to importers.

Victory for Ukraine come on south front delete this one too

Turkiye starving? Clueless idiot .shipment going to Lebanon.. we got everything we don’t need any help you need any help I send you help scumbag

Someone will sink it.

This comedian is a joke, really funny.

Read the article. He is talking about Ukraine having a good crisis with 50% harvest and exploring much of it. Nice job of commenting without reading.

The US and nato will find a way to pervert the use of these grain ships by using them to Import weapons and to extract those US/nato minions who are running for their lives.

Absolutely nothing is beyond the pale for the USadmin and its nato poodles.

The same Putin terrorists who just doomed Russia by destroying all its military equipment in the special moronic operation and just collapsed the entire Russian economy are now trying to lecture the Ukrainian government. That’s like Adolf Hitler trying to teach the daily Torah.

While whites slaughter each other in white nations, the most important thing is that the food gets exported to feed the useless niggers in Africa. That’s the top priority.

I compared two Anthems of RUSSIA and the USA… Don’t blame me, but, as they say, you can’t throw words out of a song!!! Words from the US Anthem (translated by M. Naimiller): battle, blood, rockets, vile enemy, arrogant enemy, attacks, a gang of murderers, the flames of war, blood, crimes, mercenary troops, the horror of flight and the darkness of the grave, decay, rebellious, the devastation of war, bomb bursts, Words from the Anthem of RUSSIA: sacred power, beloved country, will, glory, heritage, fatherland, fraternal peoples, wisdom, union, loyalty to the Fatherland. What are the symbols of the state – such!

Ukraine is not just being destroyed by Russia, it is destroying itself with the madness of exporting grain when it can’t get enough for it’s own people. Ukrainians need to stand and start a civil war and get Zelensky out.

Thats no madness. Thats so they can blame Russia for the Holodomor 2.0 when is was jews like Zelinsky who made it the first time and will make it now again. The Khazars want their historic homeland back as a fall back safe haven for the possibility that israel gets under attack.

The Jews will empty out the place of their Nazi underlings (whom they despise) getting the Russians to die in the process. And when it’s all over, in will come the Jewish real estate speculators with pockets full of cash buying up the land pennies on the dollar. This was so evident from day one.

Congratulations Putin you now have your Misurata where the west will deliver weapons and troops without beeing disturbed caues “grain transports”.

Rothshild is probably allready thinking which demonic way he will kill you.

If the Russians really love ❤️ the Ukrainian people then they will provide them with the needed grain to survive after the war is over. This will likely happen.

You seem to not understand how the west works. They will tell the ukrainians that russia wants to poisen whem with their grain. And just like in other places the people will believe the west.