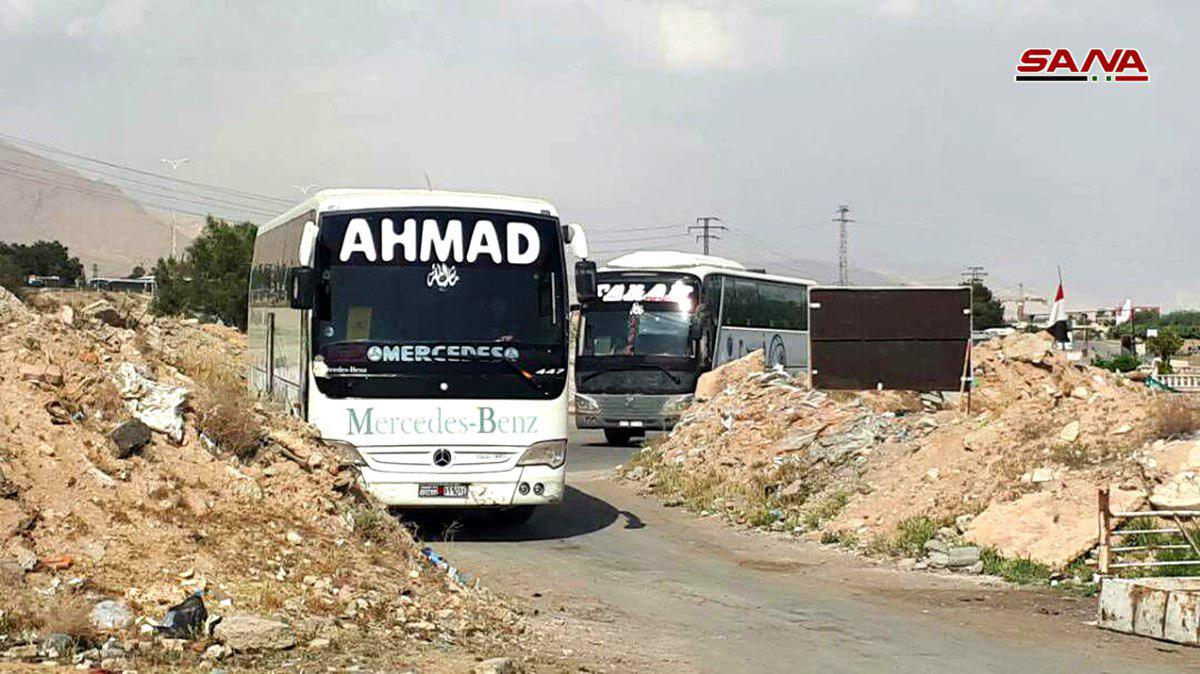 UPDATE: The first batch of militants has left the Douma district.

A first batch of Jaysh al-Islam fighters is about to left the Duma district towards the northern city of Jarabulus, according to the Syrian Arab News Agency (SANA). The source said that the first batch will consist of 40 buses.

Meanwhile, Jaysh al-Islam released dozens of captives from its main prison in Duma district, that’s known as “al-Tubah”. Syrian pro-government sources said that the captives will be moved to the Damascus governorate building, where they will receive an official reception.

The evacuation of Jaysh al-Islam fighters and the release of the captives are part of the final agreement that was reached earlier on March 8. The Ministry of Defense of Russia revealed that 8,000 fighters of Jaysh al-Islam along with 40,000 members of their families will be evacuated from the Duma district under the agreement.

Jaysh al-Islam informed the residents of Duma district that a civilian committee will remain there to temporary mange the district and arrange a reconciliation agreement for the fighters who had opted to stay.

Once the agreement is fully fulfilled, the Syrian Arab Army (SAA) may launch a new military operation to clear the Eastern Qalamun pocket.

Good sign, if it really takes place as agreed this time, the evacuation of those murderous terrorists.

Why would the Americans attack Syria…? They must be retards….sometimes I’m really wondering what is inside the heads of those People…they lost every contact with reality…Are they using Drugs or something…?

They are not on drugs my friend, we wish they were. They are following Satan’s command.

That’s exactly why they do not want to Die right now…..they don’t wanna burn yet…

Looks like they are in a rush to get out now the missiles will fly!

Yarmouk Rats? You have murderous ideas Yarmouk is the largest Palestinian refugee camp in Syria, that your kind expelled in 1948

It is currently occupied by ISIS terrorists

It was liberated, what happened?

In your dream, na.

Yes and liwa alquds is a part of the SAA ?

The group is composed of predominantly SUNNi Palestinians from the al-Nayrab district as well as the former refugee camp Handarat. Liwa al-Quds is believed to be the largest loyalist auxiliary force operating in Aleppo. Now shutt da fuckk up and sit down. Source https://en.m.wikipedia.org/wiki/Liwa_al-Quds

He means the ISIS and other terrorist groups who have held the population hostage there in Yarmouk camp.

The problem is Yarmouk contains factions of Palestinian’s who are Hamas aligned – and Hamas is a Muslim Brotherhood derived organization. Hamas is fundamentalist Sunni – so they formally announced their support of the Sunni armed militants in Syria in 2012 – decamping all previous offices from Damascus to Doha. Hamas have officially supported the Qatari sponsored militant proxies and taught various militant factions how to effectively tunnel in Syria. Syria needs to expel all the Palestinian Hamas factions from its borders.

Mopping up process going strong, wonder what Israel response will be when there jihad wanna be start getting bombed to fuck by Russia right on the Golan

Russia should make a concerted effort to hunt down the so called “White Helmets”. That group is worse than ISIS

No they are the same https://www.youtube.com/watch?v=lvTAi0MXY6w

Yes, they should and prosecute them for war crime

They will probably emerge in Afghanistan or be sent to europe posing as political refugees.

It sounds like a job for a Russian, Chinese and Iranian influenced ICC court coerced into doing their job. Plus more backing from other countries who’s leaders slowly grow some balls once clear of the world bully.

It amazes me how stupid the average human actually is, even though the evidence is overwhelming that global terrorism is controlled by the USA, most still think that the US fights terrorism. As a species we are doomed, too stupid to survive.

As you have said, they are american bitches, so will go where they are told. Afghanistan isn’t finished with yet. Where else is it ‘secure’ for the US/nato to store their rescued patsy’s. Maybe the reason why the Kurds have US support is to enable a northern escape route for US/nato terrorists.

It’s all unraveling so won’t be long before we get some answers.

Slowly but surely those Headchopping Sheeples are being directed & guided towards their end…..Lambchops

US, UK, France and Israel are worried that Syria are liberating their country from us and if they liberate then obviously our illegal military bases, terrorist recruitment and training bases would be the next target. So in fact US, UK, France are not worried for Syrian nation rather for their own destruction in Syria, because we see that they are slaughtering unarmed Palestinians and Kashmiries since 1900 and 1947 respectively and these morons have ignored them and are not talking about them. Therefore, their statments against Assad and their allies are all bull shit and this creates doubt and suspicion. All the time you will see stupid remarks from the stupid politicians.

They eared they Zio- pay by staging the CW attack and now will go away content and not answering for their crimes. How many good Syrians will die tonight from US bombs courtesy of this human trash?

Hundreds of Syrian Arabs and Christians join the fight in Al hashikia to fight the bastardized forces of the SAA With US terrorists getting rather thin, US be left severely isolated the French be long gone once it gets any way sticky There lovers not fighters

Difficult for a normal person to understand. 10K terrorist with families =40K . That is a lot of people. But the larger question is, what do they want with their lives ? Anywhere on the planet someone is in charge. Why would they choose death and destruction. How does the CIA convince these people war is better than peace ,when they have sons, daughters, & infants. All of the Middle Eastern wars, are, the never-ending wars American Neocons , fantasize about.

Ignorance, that is why the US has dumbed down the American people.

“The most dangerous man to any government is the man who is able to think things out for himself, without regard to the prevailing superstitions and taboos. Almost inevitably he comes to the conclusion that the government he lives under is dishonest, insane, and intolerable…”

Grand fantasies lure many. The leaders fantasise about being great leaders – their names are a giveaway. Al Baghdadi wanted to be the sultan of Baghdad, Al Julani wanted to be the Prince of the Kingdom of Golan. The rank an file are susceptible wahhabis, some “work” for money, others dream of wahhabi kingdoms ruling the world. And all the time Mossad and CIA are in the background engineering things, and the fighters think that they are backing them!

Money $$, as usual, USA knows very well how to corrupt and compromise people.

South Front should ( by reference to all the Discussion propoganda ) be cut out of the internet as it is a violently anti-semetic ,anti -christian , anti- sunni terror supported group of Russian , Iranian , Hezbollah ,Assad trolls supporting ethic cleansing , bombing, torture, rape and murder. Block it…close it down , trace back the Shia Axis of Satanic Evil discussionists and put them on terror lists if the russian funded website does not shut down its “discussion” (sic) site of moronic and violent propoganda . Rob, Jeo, Peter or should I call you by your real names of Ivan , Putin , Ayatollah Whatever ….you WILL be traced, tracked and hunted down by CIA , Mossad, MI6, SAS and quietly eliminated so sleep with one eye open for the next twenty years and watch out for your families . What yiu have written is worse than adolf hitler or pol pot or Osama Bin laden ( may he rest in hell with his boy lovers) and the biggest faggot of all Al Baghdadi ! By the way any of you retards from cousins parents ? Signing out before the tracking starts …3….2…..1..

You are not a Christian. You are a Zionist Heretic who hates true Christians like the ones in Syria and Palestine. I am a right believing Orthodox Christian (and an American) and you and the Zionists are my enemies. I am armed you SOB. Try me you SOB. You’ll end up 6 foot under.

Forget about religion fights. It is the madness of people or countries (USA-Israel-NATO) who cause destruction to other countries for envy, egoist, or/and greed. Religion is just a good excuse used by some.

Oy Vey the Heeb is strong with this one lol

They are forcibly displaced using chemical weapons. Putin’s robots can’t fight without this.

Don’t believe this until you see statements from JAI