A US Marine lieutenant colonel was sent to military jail after criticizing Washington’s fiasco of a withdrawal from Afghanistan and calling for “accountability”.

Prior to being jailed, he was relieved of command due to a now-viral social media video demanding “accountability” from senior leadership released a new video Sunday, in which he appears to resign his commission as a Marine Corps officer.

After being fired on August 27th, he continued posting social media videos and posts to Facebook, YouTube and LinkedIn.

Lt. Col. Stuart P. Scheller Jr.’s first video, released on August 26th, sparked controversy and support on its way to accumulating more than 800,000 views on Facebook as of August 30th.

The infantry Marine and battalion commander of the Advanced Infantry Training Battalion at School of Infantry–East at Camp Lejeune, North Carolina, said he made the video for his “growing discontent and contempt” of “ineptitude at the foreign policy level.”

The video was released the night that 13 service members, including 11 Marines, were killed in an attack at the Hamid Karzai International Airport in Kabul, Afghanistan.

“The reason so many people are upset on social media right now is not because the Marine on the battlefield let someone down,” Scheller said, noting that those service members always have risen to the occasion. “People are upset because their senior leaders let them down, and none of them are raising their hands and accepting accountability or saying, ‘We messed this up.’”

He is in the brig until his hearing, and the date of the hearing is yet to be determined.

Scheller currently faces no charges under the Uniform Code of Military Justice, said Capt. Sam Stephenson, a spokesman for Training and Education Command.

“The general nature of the offenses being considered at the Art. 32 hearing are: Article 88 (contempt toward officials), Article 90 (willfully disobeying superior commissioned officer), Article 92 (failure to obey lawful general orders), Article 133 (conduct unbecoming an officer and a gentleman),” Stephenson said.

He was ultimately arrested because he didn’t follow a “gag order” and started speaking on Facebook on September 26th.

Additionally, it closed with Scheller seemingly asking to be confined.

“Col. Emmel please have the MPs waiting for me at 0800 on Monday. I’m ready for jail,” Scheller ended his post.

“The only one being held accountable for this botched situation is my son, by the generals,” Scheller’s father said.

“Today’s hearing showed they won’t accept accountability for the mistakes they made. They wanted to blame everybody else – the Afghan military, the Afghan government, the weather, whoever,” he added.

This development shows a worrisome concern for the United States, with subordinates questioning the decision-making process of their leadership and calling for them to be accountable. After all, responsibility was entirely escaped by those in charge for what transpired in Afghanistan.

Military tradition is falling apart, all sorts of third-party values such as neoliberal and the like are being imposed from above, no questions asked. Those who dare to question it are silenced, imprisoned, censured and generally canceled.

The general psychological atmosphere in the United States is currently quite precarious, and moral seems to be at an all-time-low.

This is due to several factors:

If this undermining of values continues, and this uncertainty in the leadership spreads further, then any predictions of more independency for specific states, such as Texas for example seem to be much closer than anticipated.

america showing it’s respect to those who bleed into the ground for their warped foreign policy.

After the lockdown- What’s next for Europe and its people? https://odysee.com/@NordLuxBellator:6/After-the-lockdown–What's-next-for-Europe-and-its-people-:4

And yet it is far easier to be arrested in Russia, China and Middle East for saying something their rulers don’t like.

Anyone who falls for petty tricks like impersonating anonymous people in online chat rooms is most deserving of their ongoing enslavement. The child who carried out that stupid endeavor deserves to have their computer privileges taken away for months on end.

As for your herd mentality and black & white worldview, I’m guessing you are very young.

It’s 10000x far easier to be arrested and sent to jail in the US than in any of these countries. no surprise America has the most prisoners in the world by far.

Because amerika is in a police state that spies on, censors, and makes unfounded accusations of dOmEsTiC tErRoRiSm on it’s own people.

USA is the Soviet Union.

What Country Incarcerates more of its own citizens? The USA. The USA is at the top of the list without a close 2nd. Stop deluding yourself.

I don’t think you will ever see the big picture, you assume “whitey’s” at fault for everything and any attempt to warn others about the hidden jewish hand as a “desperate, futile ploy” by a dying “Anglo” empire to prevent its demise.

You should ask yourself why influential capitalistic kikes from America ever bothered to finance the Bolshevik revolution and provided instrumental support in building up the Chinese Communist Party.

You don’t understand both sides are apart of the same globalist paradigm.
https://youtu.be/acZXridt7wM
https://forward.com/schmooze/159051/a-jew-in-maos-china/

you don’t think at all, you are too stupid to think 😀

The damage is already done, it is like talking to brick walls. 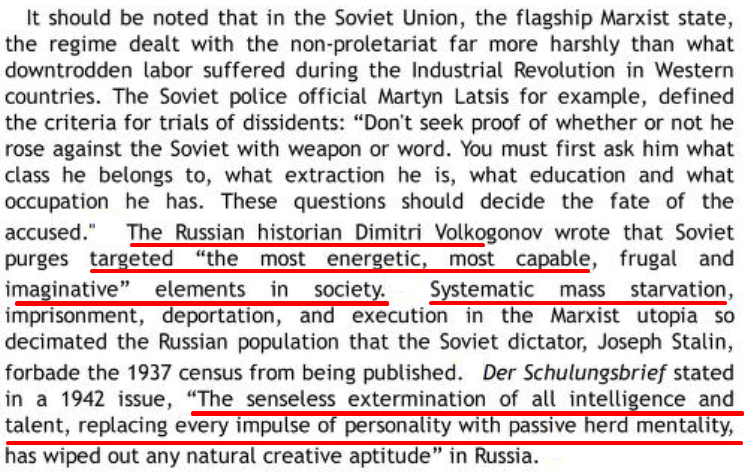 No one is is interested in stale Reaganist propaganda and garbage Hitlerist lies for braindead morons like you.

“Liberal values” are destabilisation techniques. Those behind who impose them, are people who want the society or the unit to fail.

The US officially now has political prisoners.

Guantanamo never bothered you then

The patriot act allows civilians to be held in a military prison without charges and without the right too a lawyer . If the person has a lawyer and manages to visit , that can be denied by the camp commander , the lawyer can be prevented from telling the person what charges if any have been laid. Go and read what happened to the US Embassy worker in Baghdad who worked for the CIA that was used to talk with Saddam Hussein . Saddam told her that he was ready to meet all demands by the US but they denied this and attacked. When she stood up after the war and stated this and other communications she was locked away in a military prison and her lawyer was forever told she didn’t exist in that base. Can’t remember her name offhand but a very interesting story. Yes America has political prisoners and deny their existence.

Now? They have political prisoners since 1776. now they are just more exposed, cannot even hide tyranny any more.

The US Neo-Con-cabal policy-maker’s attitude toward the military are reflective of Henry Kissinger, who stated that military men are mere tools to follow commands (ie, his commands). Kissinger was very disdainful of both the soldier and the general. In more recent past Obama ramped up the anti-whistleblower legislation in US to make firing and prosecution of any public employee making public disclosures far easier. The result of all this is an inevitable increasing disconnect between US military and the policy makers, a dismissive attitude toward military morale from (chicken-hawk-civilian) policy-makers, and the clamping down on any public employee that publicly speaks out.

Before joining, he did not read Marine Corp General Smedley Butler’s book, War is a Racket. It took him this long, and he probably still has not figured that out.

There is so much ignorance in the comments. It is forbidden under military law for active duty personnel to criticize the president. As he is their commander, it is insubordination, punishable by imprisonment. It has nothing to do with his politics. This man willingly waived his right to free speech when he joined the Marines.

He broke the law, and now he’s paying the price. Politics has nothing to do with it.

It has everything to do with politics.

That is why he is throwing his miliary career and himself into the fire.

He was imprisoned for insubordination, not because of his politics. Politics motivated him to commit the crime, but it did not provoke the military to punish him. He is a lawbreaker, not a political prisoner.

Good sIave! Of course he did. You live in a land with over 100,000 criminal laws, 75,000 pages of tax code, and endless Statute, Code and Ordinance. A minor breach of any in the above massive can lead to your demise at the hands of militarized police because you did not scrape the floor fast enough. No other nation, or culture, in all of History was ever so oppressive and tyrannical. USSA has the largest prison system in the world but you think you are free! You cannot even go fishing in the USSA without risking an encounter with Militarized Police over License and Papers. No nation on Earth has so many militarized checkpoints! America has made it illegal to be homeless or live off the land. The King owns most of the land and if you are found living on it you can be in for an encounter with militarized police who will -if you`re lucky- Jail you. If Rikers Island is actually better than death…

Last edited 17 days ago by U S Asylum
2
Reply

Ronald
Reply to  U S Asylum

You are spot on, until you reach “the king owns most of the land”.
America has no king, or Crown.

Not literally of course, it s a metaphor

Don’t forget to add that soldiers who refuse to be vaccinated are being threatened with ending their careers and being forced out of the military with Dishonorable discharge. No retirement, college benefits.

That LTC has balls of steel.

Americant demoncrazy in a nutshell…

sad but all to true…this is what we have become…..

Accountability like this is to be honored.
Here is a doctor from the USAF, she earns the same honor;
https://www.deepcapture.com/2021/09/affidavit-of-ltc-theresa-long-m-d-in-support-of-a-motion-for-a-preliminary-injunction-order/

He’s an idiot. He was fighting to spread wokism to Afghanistan. He should have realized that in the US with secret courts and secret police that he would be persecuted for varying from the Government approved narrative.