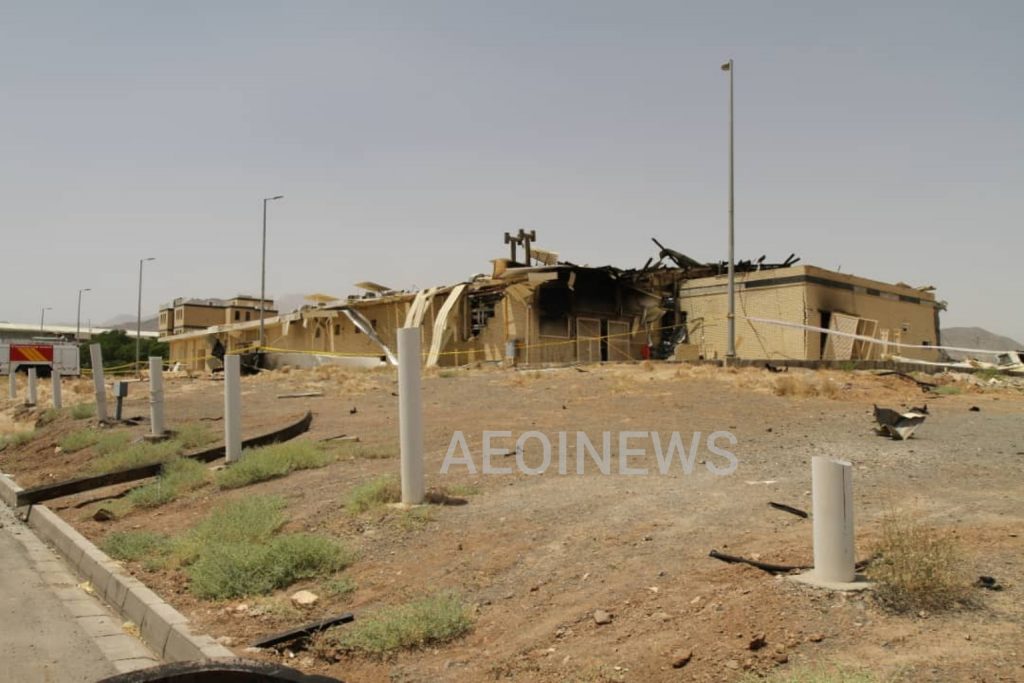 The string of unfortunate inidents, fires and just explosions continues in Iran.

On July 2, a fire broke out at a building above Iran’s underground Natanz nuclear enrichment facility. The Atomic Energy Organization of Iran called the situation an “incident” that only affected an “industrial shed” under construction. Authorities emphasized that it did not affect its centrifuge operation or cause any release of radiation.

However, it should be noted that there was no officially announced construction work at Natanz, a uranium enrichment center some 250 kilometers south of Tehran. Natanz includes underground facilities buried under some 7.6 meters of concrete, which offers protection from airstrikes.

The site of the fire corresponds to a newly opened centrifuge production facility.

Natanz is also known as the Pilot Fuel Enrichment Plant. It is among the sites now monitored by the International Atomic Energy Agency after Iran’s 2015 nuclear deal with world powers.

While offering no cause for the fire, Iran’s state-run IRNA news agency published an article addressing the possibility of sabotage by enemy nations such as Israel and the US.

great that nothing was damaged

So you write this because the mullahs regime’s propaganda ministry said so.

Unfortunately I don’t think this was the case, clearly the photos show damage that is consistent with a rather violent explosion locating from somewhere inside the building; i.e.: blown off roof, destroyed windows, cracked walls (this would indicate that it was an explosive device of some sort), fire that most likely started either before or after the explosion went off.

What’s important to note here is this facility isn’t just some some random auxiliary building, it had a very important purpose. This building was where the fabrication, production and assembly of the more advanced Iranian made centrifuges was being done. Undoubtedly expensive proprietary equipment housed in that building has been outright destroyed. Usually I take what Iran says as face value but this recent event and the last gas explosion near the missile production facility have called many things into question. It’s not outside the realm of possibility that Iran is quite literally under-attack from a multi-pronged internal sabotaging campaign aimed at hitting sensitive state owned property as well as strategic military assets. Moreover we don’t know if these attacks are just one offs or if this is a part of a larger more complex operation.

Needless to say we’re going to have to wait and see what Iran is planning to do in response to this act of sabotage. I can’t really say what going to happen next since Iran can take this in any way they deem fit. Although what has now become more of a reality is that there might be an ongoing sabotage campaign in Iran by either the usual actors (Israel, U.S, Saudi Arabia etc) acting through proxies or directly or there is some new dissident groups causing these incidents.

Assad must stay
Reply to  BlueInGreen

we shall see mister blueingreen, but the blessed nation of iran will always be victorious, it has God as its mightiest defender

I can get behind the sentiment lol

Assad must stay
Reply to  BlueInGreen

“….Iran can take this in any way they deem fit.” – They will deny that there has been significant damage. A few days later, they will accuse an outside party (USA, Israel) and threaten a very very very harsh response. But they won’t do anything.

Respectively speaking I disagree, the threats to Israel and the U.S. will come no matter what so that part doesn’t really concern me but what Iran can do in response to this apparent sabotage is varied and potentially severe depending on what course of action Iran decides to take.

-Iran could use this as ample reason to kick out any IAEA members working in Iran and kill the JCPOA outright with the possibility of exiting the NPT. This would be the most severe option realistically speaking as I don’t think Iran will be taking military action as a form of reprisal for this recent attack.

-Iran can take the blow on the chin and continue producing centrifuges since the main bulk of advanced centrifuge fabrication is reportedly underground. This would be (imo) the best option as Iran isn’t a nation that it quick to make rash decisions. Moreover time is on Iran’s side, all they would realistically need to do is keep plugging and chugging so-to-speak.

-Iran could undergo Military escalation or counter-attack. This one obviously carries the highest risk of outright escalation due to its very nature. But Iran would have to determined exactly who was behind this attack and that answer is somewhat hard to reach as there is a multitude of different actors who could have conducted this operation (Mossad, MEK, CIA, Other dissident groups etc..)

Probably the second option is the most realistic. Keep in mind that the Iranian press has been reporting mysterious fires in various locations in Iran for several weeks. It seems to me that we are witnessing a widespread campaign against Iran.

That would indeed seem to be the case.

An organization by the name of “Homeland Panthers” has taken responsibility for the nuclear site explosion.

I wouldn’t read to much into the “Homeland Panthers” thing if i were you as it could very well be just some misinformation by the real perpetrators to guide Iranian authorities n a wild-goose chase whilst more operations go down in other places.

I agree. This organization took responsibility immediately after the explosion and before the announcement of the Iranian regime.

Business as usual for the usual suspects.

despite the riches of gas and oil, Iran is producing nukes for the generation of electricity—the Israeli/amerikan imperialists r envious

Iran is right in chasing down jew spies at work in Iran, posing as good Iranian citizens while in fact being jew spies – they should be hanged publicly. third incident of this kind and no way it’s just accidents – it’s jews sabotaging the peaceful work by Iran in Iran – time to finish off the jews. they have no place on earth among decent people and will not be missed.

Gas tanks in Iran are unstable these days. LOL. Something very bad has been happening in Iran in recent weeks, it started with unexplained fires and now mysterious explosions in sensitive facilities.

There are many deliberate fires happening in Iran, most of them on national parks and remote places. I saw an idiot from MeK in a video claiming that they hire young people and pay them to start fire on remote places and boasted many of recent fires are their work.

In the last two incidents near military or nuclear facilities, it’s important to note that fires were started not in a restricted area, but on publicly accessible site. Both the gas storage and this building are easily accessible for anybody, so I wouldn’t rule out a pre-planned saboutage. Such fires won’t inflict any noticable damage, but paint a different picture about Iran, a country that is so unsafe that everything catches fire. If you watch the follow up on Persian services of western/Saudi MSM, you’ll notice that’s the path they work on.

The tragedy was the fire of Plasco building, or a few days ago in a clinic in northern Tehran which took 18 victims. Thanks to our corrupt and useless city council and municipality, Fire department has no say in shutting down unsafe businesses. Fire department warned the building owner and manager more than once about all the safety rules they broke (the beauty clinic building even didn’t have a fire escape or enough fire extinguishers/axes). The owner chose to neglect on safety because it costs and the result was a catastrophe. We hope the new parliament changes that and makes a law that renewing permits annually depend on safety of establishment, period.

“I saw an idiot from MeK in a video claiming that they hire young people and pay them to start fire” – Sounds more like a fabricated video of the mullahs regime. Suitable their pattern of action. “Both the gas storage and this building are easily accessible for anybody,” – No they are not. Do you really claim that anyone can enter the base in Natanz ? One of your weirdest posts.

Sure, if he wasn’t so stupid to introduce himself and the video wasn’t published on one of MeK social media channels, it could be a “mulla” fabrication. That is fallacy, I didn’t write Natanz is accessible to anyone, I wrote those facilities aren’t located in the restricted area.

These “saboutages” are like children ringing their neighbour’s bell and hide. They won’t hurt Iran but are fantastic for terror groups to milk their American and Saudi backers for “budget” and “donations”. Israelis aren’t rich and stupid enough to fall for such theatrics.

1. Opposition organizations claim that regime agents are responsible for the fires. I don’t know who’s really behind the fires, but a video with a message of guilt from a MEK rep seems strange. 2. Can a centrifuge assembly workshop be in a public area? The images from the site show an internal blast effect not an external fire. If it was an empty building in a public area, why would the regime’s representatives hint at foreign involvement and Iranian revenge? In my opinion what is happening in Iran right now is more than a few kids running in the fields with matches.