On August 1, Armenia reported on the movement of Azerbaijani military units on the line of contact in Nagorno-Karabakh and shelling of Armenian positions.

The Ministry of Defense of Artsakh (Nagorno—Karabakh) reported that the Azerbaijani Armed Forces fired at several villages in the republic at once.

On August 1, starting at 9 am, Azerbaijani units resorted to provocations on a number of sections of the northern and northwestern borders of the Republic of Artsakh, attempting to cross the contact line, the ministry said in a statement.

No losses on the Armenian side were reported.

On July 31, Azerbaijan accused Armenia of attacking its military positions in the disputed region of Nagorno-Karabakh.

In a statement, the Azerbaijani Ministry of Defense said that Armenian forces opened fire at its positions in Gadabay, Kalbajar and Khojavend. The ministry didn’t report any casualties or material losses were as a result of the alleged Armenian attack.

Azerbaijani troops were spotted moving towards the conflict zone. Armenian army forces are pulling back to the border in response to Azerbaijani manoeuvres.

New round of escalation in the region took place soon after Washington held talks with the warring sides.

On July 25, U.S. Secretary of State Anthony Blinken discussed the situation in Nagorno-Karabakh with Armenian Prime Minister Nikola Pashinyan and Azerbaijani President Ilham Aliyev. The talks were held separately. Blinken reportedly urged both sides to seek peace and continue their dialogue. The U.S. Secretary of State noted the important role of the EU in the resolution of the conflict and said that the U.S. is ready to support the long-term peace.

Azerbaijani Foreign Minister Ceyhun Bayramov and U.S. Undersecretary of State for European and Eurasian Affairs Karen Donfried also held talks on August 1. They exchanged their views on the current situation regarding the post-conflict normalization of relations between Azerbaijan and Armenia.

Bayramov claimed that Azerbaijan is set to ensure peace and progress in the region, noting that the parties must fulfill their obligations in full. In this regard, he claimed that contrary to the commitments stipulated in the trilateral statement of November 10, 2020, the Armenian armed forces have not been fully withdrawn from the territory of Azerbaijan. 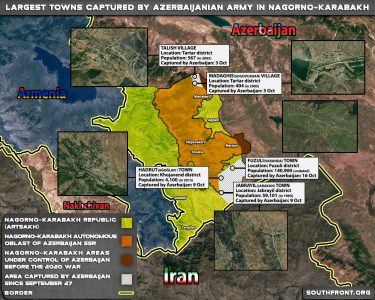 Hundreds of Russian peacekeepers are currently deployed in Nagorno-Karabakh to enforce a ceasefire agreement that was reached after the large-scale Azerbaijani offensive on Armenian forces in the region in 2020. During the offensive, which claimed the lives of some 7,000 soldiers and civilians from both sides, a large chunk of the region came under control of Azerbaijan.

The situation in Nagorno-Karabakh has been stable since March, when a series of Azerbaijani strikes claimed the lives of three Armenian soldiers.

Baku is expected to destabilize the situation in Nagorno-Karabakh secured by Russian peacekeeping forces in mid August when the Russian military may face with the expected large offensive of the Armed Forces of Ukraine in eastern Ukrainian regions. By accusing Armenia of violating the ceasefire in Nagorno-Karabakh, Azerbaijan may be trying to provide a pretext to resume its military operations in the region while Russia is still preoccupied with its ongoing special military operation in Ukraine, as well as with the ongoing destabilization in Kosovo where Moscow is supporting Belgrade, its main ally in Eastern Europe.

Like always the other othodox people will pay the price for russia. The West is sitting all friends of russia on fire simultaniusly. Kosovo is boiling as well and Moldova has been preparing to attack Transnitria with Romanian and Polish help while Poland has prepared to attack Belarus and Turkey and Israel are continuing to attack syria.

Azov is not an Ukraine sea
Reply to  kotromanic

NATO's PROXYTUTE
Reply to  Azov is not an Ukraine sea

Blinken just had talks with these countries and it should not surprise anyone that suddenly both sides are now back to shooting war, since we’ve witnessed in the past that yanks always bring an ominous sign where a looming tragedy will take place soon. Coincidentally, a military showdown between Serbia & Kosovo is brewing that might breakout anytime that was also inspired by the Western bloc. These events could exacerbate the already dire situation in Ukraine capable of messing up the entire region if left unattended.

Антон
Reply to  Azov is not an Ukraine sea

AZ is on the border with Russia, which has boarder guards and military base in AR, peacekeeping forces in Karabah, no need to enter Gruzia.

KARABAKH BELONG TO AZERBAIJAN.. ALWAYS WILL

And my ANUS belongs to the JEWS

Kebab, your ass belongs to me.

Does Attila rents his anus or he sold it for 30 shekels?

You must be brothers.

İran will invade azerbaijan .. russia gives iran permission for this i think

Russia can easily decapitate the leadership of Azer with hyper-sonic missiles and has replacements who fled to Russia and yes Iran and Russia can crush Azer in 24 hours.

One of those missiles seemes to have hit You.

Remember recent meeting in Tehran, no one want a war between Iran and Turkey. AZ is client of Ankara. There will be peaceful solution with provocations in future, this tome wasn’t the first one.

No,they are likely to crush soros/cia/lgbtqism out of the region for good,no future in fascism! Russia will persist to utilise supersonic/hypersonic weapons against the cia/soros.nazi/.lgbtqs, if not such whom aspireth,certainly no wisened hetero run nations (period)

And take Kiev in three days!

None in the whole Azarbajdian want that. The religions and culture is very different as well.

This is obviously in coordination with Turks in their offensive in Syria, perhaps even in events in Kosovo, western terrorist zionist alliance is now going on the offensive on multiple fronts. They are trying to stretch Russia thin, hope Russia smacks them across the face and punishes these fiends for their evil behavior!

Azer and Turkey get almost all their food from Russia end of story. Russia can destroy Azers oil and gas pipelines in 10 minutes.

So what can any of them build? Its never here.

what can worthless dane build? we sell many cars trucks to 40 nations; you worthless lgbt sell lego to amerikans🇷🇺🇷🇺🇷🇺

Hoping is one thing, in relity it is very hard to wage war on many fronts.

I agree. Its not like that. The only big one is making Russia exhausted in Ukraine.

That would be nice. Hard to see any realisme in Your assumptions

Are you sure that you know everything that is happening, and you allow yourself to tell Putin what to do? You are a fool! First, Russia has no borders with Armenia. In the second Armenia, nothing threatens, this is a theater. Thirdly, do not climb where your brains do not understand anything! read it better, look at the cards, draw conclusions if you have enough brains!

Now why on earth would Putin ever want to side with soros/lgbtq/nazis hey,iq of ye shoesize,fkn drr!

Somebody is pushing for another war near Russian border. Wonder who may it be?

I see none. Turkey might be the only one. They aloready has spred out themself too much.

All is fine, car production down 95%, no Airline industry left to speak off, russian – chinese aviation project going down the toilet,due to russian failure to deliver results, and so on and so on.

But zieg hail, Putin is winning

ultimately the command is from satan, the prince of this world

Are you sure it is not an unicorn in your crotch?

The lgbtq sodomity minority of cia/soros minion nothing burgers of the century as now proved to be!

this will be easily managed

KARABAKH BELONG TO AZERBAIJAN AND ALWAYS WILL. SF BE MY guest AND DELETED IT AGAIN 3*2*1

This is second such case. The previous one has ended few months ago, Russia asked for withdrawal of AZ forces, Baku accepted.

Map is not correct, AZ conquered much more, Shusha (in the middle of orange area) was taken in last few days, some people say that Nikol Pashinyan (installed by Soros) ordered AR volunteers to retreat, local militia had no chance to hold the city and moved away too. After peace negotiations Karabah lost even more, all green area. Karabah has retained half of orange area and road to AR under control of RUS peacekeeping forces. In exchange to the road, AZ have the right for transit corridor to Nahichevan.

Russias in control not cia,soros nor their gimps pretending to be hetero/peace loving christians, my honest opinion,westy narratives so fullovit,Russia stocks up!

Azerbaijan is doing what it is doing because it thinks it can. The longer “2nd strongest army of the world” is stuck in the trenches, more and more countries will see a paper tiger in it. That is just how geopolitics work.