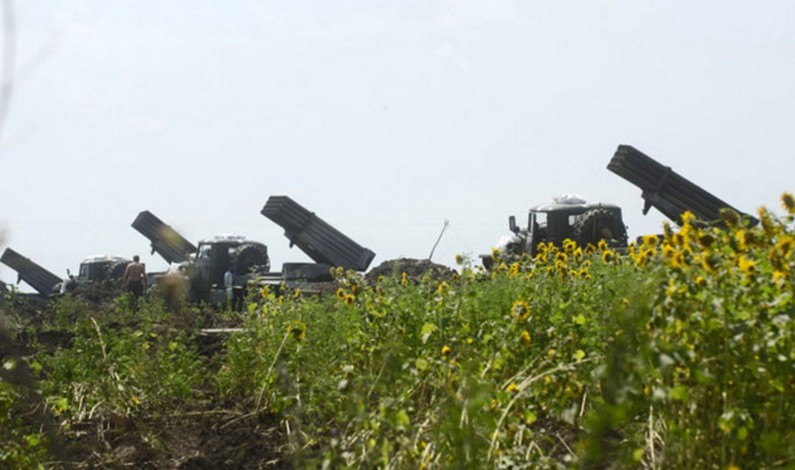 One Ukrainian soldier was killed and another four were wounded in an incident Donbas rebel official media are characterizing as a friendly fire incident, according to Russian language news account.

The incident took place near Peski and Staromykhailivka near western Donetsk city Thursday, where Ukrainian forces exchanged fire as they were conducting “uncoordinated actions”, according to a news report which appeared in regnum.ru.

The report said that two tanks and one infantry fighting vehicles of the Ukrainian 128th Separate Mechanized Brigade were destroyed in the exchange of gunfire between friendly forces. Several other Ukrainian weapons were used in the incident, but neither the article nor the source elaborated how many or which kind of weapons were used.

Ukrainian forces involved in the fighting in southeastern Ukraine have a massive problem in such incidents. Official rebel media has claimed in the past that as many as 20 percent of Ukrainian casualties involve some kind of friendly such, including accidental firearm discharges. Normally such an abnormally high accidental discharge rate can be attributed to the nature of Ukrainian forces, using poorly trained conscripts, but Ukraine’s fire discipline problems are compounded by the involvement of untrained private militias, including members of the Right Sektor political groups which man many of those units.

Exchange of gunfire and artillery fire continued by both sides in Lugansk and Donetsk over the past 48 hours, according to various Russian language news accounts.

The Ukrainian defense ministry said on Wednesday and Thursday that rebel forces fired on their positions a total of 77 times, according to a news report which appeared in lb.ua.

In Lugansk, rebel 82mm mortar fire fell on the Popasnaya area, and in Novoaleksandrovka, Boguslavsky and Novozvanovki.

The Donetsk ministry of defense reported in its website that Ukrainian artillery struck rebel positions 300 times in the previous 48 hours using heavy weapons.

Good. the fighting will continue forever, unless Mr. Put or better somebody with balls stop it by teaching Ukis the lesson. But nothing indicate that. The Ruskis like to be killed as in WW2 (22 mil.) and Gulags(64 mil.). Nam finis illorum mors est after all.

Dunno about their balls but you lack brain… 64 mil hahahaha