The Islamic State terrorist group continues to try to use boats to carry out attacks on the Iraqi Army and cross the Tigris River in Mosul, however, every time, suffers heavy losses. 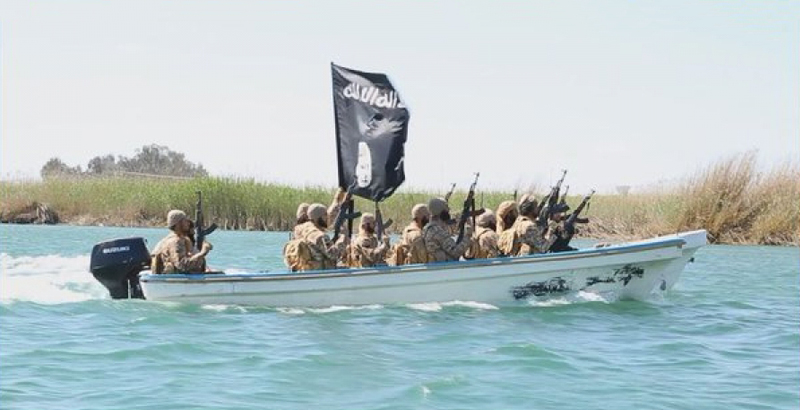 By January 30, up to 150 boats and watercrafts, sailed by terrorists of the Islamic State (IS) group on the Tigris River, have been destroyed, the USA Today newspaper reported. The most of them were used by terrorists in order to move from the eastern part of Mosul to its western side. The escape of Islamists and dispatch of arms across the river were increasing, as the Iraqi government forces were moving deeper into the city. After all the bridges across the Tigris became unusable for movement of terrorists, the way through the water was the only one for the salvation. One question arises – who exactly was in the destroyed boats: terrorists or civilians, fleeing from the city.

As the Inosmi information website noted, just a week before January 30, the total number of sunken boats in Mosul was 112 pieces, including three barges. Ninety watercrafts of terrorists were destroyed during just three days. During the last weekend in February, other six boats of Islamists were destroyed from the air.

According to Iraqi Colonel Nazaire Tahir, every night, terrorists try to cross the river in boats, committing suicide attacks. For a week, about 40 boats of Islamists tried to break through to the east coast. Sometimes, there are up to a dozen of terrorists in each boat.

According to another Iraqi officer, terrorists with suicide bomber’s belts, who are in boats, are under the influence of drugs, as no one of them in the right mind would be on the edge of doing something like this, after they saw the eliminations of their companions in arms.

However, according to Ilya Plekhanov, an author of the article, not only terrorists use the Tigris River. Civilians also try to cross the river in order to reach the western part of Mosul, controlled by the government forces. The number of civilians, who were taken to be terrorists and killed by the Iraqi Army or coalition’s aircraft, will remain a mystery forever.

Operations on the rivers of Tigris or Euphrates are not something new. It is clear that dozens of boats that are sunken per day in recent time indicate a critical situation and the loss of the eastern part of Mosul by terrorists, but active war on the water have not been stopping since the beginning of preparations for the assault on the city.

In the autumn of the last year, only in September, 65 boats of the IS were destroyed by the coalition from the air, but it made no effect on activity of the terrorist group on the river, as terrorists easily replenished their fleet, confiscating boats from local residents. In the summer of 2016, using explosive-packed barges, the IS also tried to blow up pontoon bridges of the Iraqi Army, advancing on Mosul across the Tigris River.

The author of the article decided to look further into the history.

On July 31, 2014, the IS stormed Dhuluiya village, located 80 km to the north of Baghdad, and used boats, equipped with machine guns. On September 6, the terrorist group sent a boat, loaded with explosives, to a pontoon bridge, however, the Iraqi forces managed to destroy the watercraft.

In September 2014, the Iraqi Special Forces captured boats with IS terrorists on the Euphrates River.

In November 2014, the terrorist group started to transport explosives across the Euphrates near Ramadi, using a military motor boat, captured from the government forces.

In January 2015, the IS successfully attacked the Kurdish town of Gwer, crossing the Zab River by boats and killing 30 Kurds. In June 2014, there was a similar attack across the Zab.

On January 11, 2015, Islamists practically blew up a dam, located near Samarra, using a boat packed with explosives.

On January 25, 2015, the coalition destroyed 25 boats of the terrorist group, to the south of Ramadi.

In April 2015, the IS released a propaganda video, which showed ostentatious exercises of its own detachment of the ‘navy seals-jihadists’, who could carry out attacks from the water. The video caused laughter of the US Marines.

In May 2015, the Iraqi forces destroyed IS boats that tried to break through in Tikrit. In April, boats of terrorists were destroyed in Anbar province. In February 2015, the IS conducted reconnaissance on the river near Fallujah.

As Inosmi noted, in 2003, US patrol boats operated in the delta of the Tigris River during the invasion in Iraq. In 2007, the US dispatched special river patrol units to Iraq, bearing in mind the usage of their boats in Vietnam. Until 2007, operations on rivers in Iraq were conducted by the US Marine Corps and the US Navy. From 2007 to 2011, US river units conducted more than 6,000 operations on Iraqi rivers, as well as trained and equipped their Iraqi colleagues by the end of 2010. After the departure of the Americans from the country and, until recently, the Iraqi river police have been resisting river operations of the IS.

Today, when the main events take place in Mosul, the coalition’s air power again targets Islamists’ boats. As the author of the article assumed, most likely, we will not hear about ‘river flotillas of the IS’ in Iraq any more.