“ISIS continues to carry out counter-attacks on our points of concentration, and after besieging the city about a month ago, Islamic State Organization still using booby trapped cars and motorcycles, explosive belts and tunnels,” Bali said.

Bali stressed that Raqqa Battle is not an easy battle, and that the SDF has so far managed to capture 50% of the city.

Bali also said that large numbers of civilians are still trapped inside the cit and that SDF is working to evacuate them.

“We communicate with besieged civilians through special units that collect databases to search for the best solutions and safe outlets to evacuate them,” he said.

Indeed, the SDF has so far managed to evacuate tens of thousands of civilians from the city.

According to local sources, the humanitarian situation in Raqqa is very bad due to the siege imposed on the city by the SDF, and ISIS practices inside the city.

More than 100 children have been reportedly killed in Raqqa city as a result of the US-led coalition air strikes and the shelling of the Syrian Democratic Forces (SDF) on the city since the start of the storm of the city. According to opposition sources, the artillery shelling on civilian areas in Raqqa killed at least 50 civilians over the past 48 hours.

The Butcher’s bill keeps growing with the US illegal strikes in Raqqa and Syria they should hang their heads in shame for murdering and killing civilians they seem much worse than ISIS themselves in that regard.

So SDF should send in weapons so ISIS can defend them better ?

Civilians shouldn’t be targeted as they have been claimed to be ISIS by the US and SDF early on. The problem is one likes you see it as a necessity to push the Kurds agenda.

IS supporters lamenting civilians killed in Raqqah by, supposedly, SDF fighting and US shelling and bombing while IS is actively trying to either kill civilians or use them as human shields.

SDF is trying to get civilians out of the city, some of them even getting klled while doing that.

DutchNational just LOOOVES the SDF / YPG!
You literally ONLY comment on SDF related News Blogs!
YOU ARE THE TROLL! 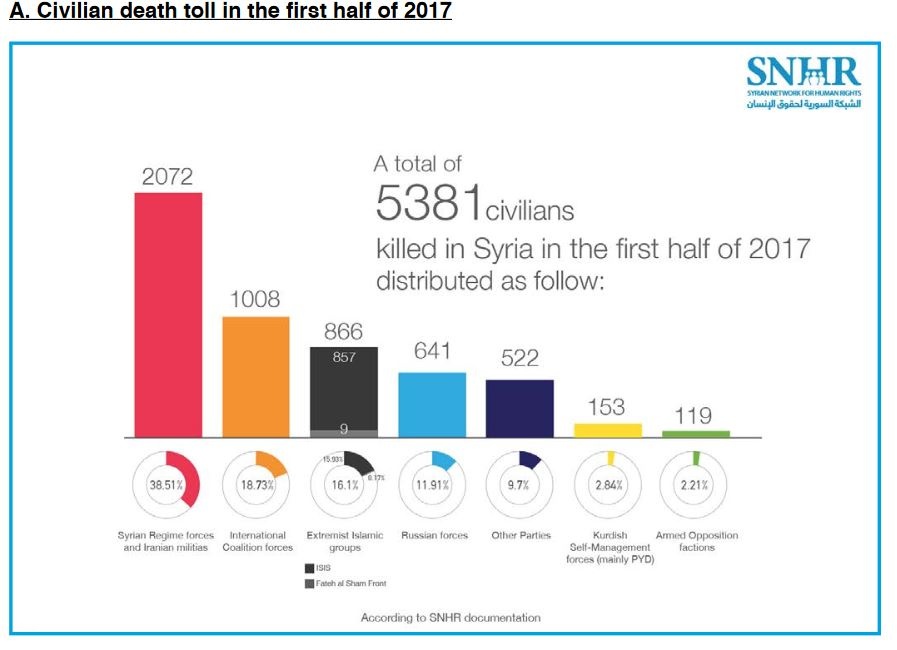 Sounds reliable according to, what I kind of feel

WOW! you use a one man source who like Jens Holms report what they feel , try Air Warz next time and you will get the real picture somewhat. There is no credibility with a one man show who published the videos of the alleged last days of people in Aleppo and of a girl who was presented as a Syrian Anne Frank and like her the father wrote and directed everything.

Your original point was that the Americans are currently killing more civilians than ISIS. The stats I located from the Syrian Network of Human Rights agree with you! Presumably you didn’t like those stats because they also show the Syrian government forces as being far and away the biggest killers of civilians. Airwars [ https://airwars.org/civilian-casualty-claims/ ] only looks at casualties from the US and Russian air campaigns – no ISIS stats or Syrian Air force stats either. No wonder you prefer Airwars!

As Airwars states “particularly in the context of Iraq and Syria, casualty monitoring presents significant challenges.” If you have any other sources for civilian casualties please feel free to share them with us. I realise though that evidence based argument isn’t your strong point. Bald assertion is more your thing.

The UN can’t even monitor the numbers killed by the US and have allocated most of its resources to the task .The SNHR is really not known for anything but propaganda since they are part of Oxford Research Group which is multi agency sponsored group in the UK which has 2 offices and NATO’S version of the CFR.

The problem during war time is that numbers are generally under reported or not reported at all by the parties involved , and the collection of those numbers fall on non profit groups and the UN which all are restrained by limited finances for this task. The UN has focused it’s most of it’s resources to the US/Coalition since the numbers from Russia/Syria were low and easier to identify.

Air Warz with no real horse in the race admit they can’t keep up to the US/Coalition strikes , since the almost from the start. The daily reports by hospitals is alarming confirming civilian not ISIS casualties deaths and injuries. Here is one such incident 2 different sources US reports attack on ISIS convoy of 30 killing and injuring 18 people Syrian Hospital reported family of 30 being struck by Coalition Airstrike killing 6 and wounding 12 fleeing Airstrikes .

The one thing we can learn from this is reporting is never accurately done by the Coalition forces, since the UK,France, Australia and Belgium, etc.don’t report civilian casualties only the US does this for themselves and under report those.During World War 2 the numbers were not known until after the end of the war.

The Middle East has seen bombing from the West since 1945 and about 20 million killed since then.Your quote Bald assertion is your thing falls heavily on your shoulders as you admit that no one can be correct in your statement, but the number attributed to Trump is 2200 with 600 coming in the first month in March.