Fierce clashes between the Taliban and ISIS are ongoing in the Afghan provinces of Nangarhar, Ghazni and Kunar, according to reports by local media and pro-Taliban sources.

Over the past few months, tensions between the two groups have also itensified in the border areas between Afghanistan and Tajikistan, and Afghanistan and Uzbekistan. The Tliban is actively working to deny ISIS space for physical presence and to expand its expansion in Afghanistan. Pro-Taliban sources even claim that some ISIS units receive support from the US-led coalition, which sees the ISIS expansion as a tool to combat the Taliban.

ISIS Gets Choppered in by the United States of America….

ya choppered in and out of many countries i notice and you know what??we have vids and pics of these isis fighters cannibalising locals cutting heads off civs and putting them on there vehicals even mass graves of civs and children all over syria and iraq and your fckn trump is protecting and backing these fckn war criminals your gov is going down america for this one!!get used to the words war crimes americans french and brits get fckn used to it you will hear it allot more soon

If I had my way, the Taliban would chopp’er them in and out.

There was only Taliban and USA NATO terrorists organization troops.How did ISIS get to Afghanistan if their were only deployed to Libya and Syria.It is very clear USA is a terrorist’s superpower state.

ISIS developed primarily in Levant after 2012 – Syria and Iraq (with scattered small factions westwards of Levant in Egyptian Sinai and Libya). Any direct ground passage eastwards from Levant to Afghanistan requires transit through Iran. Now that wasn’t going to happen with ISIS. But instead ISIS miraculously appeared entering into Afghanistan from its northern borders – moving down from central Asia – from Uzbekistan and Tajikistan. There are at least three countries between Iraq and Uzbekistan -Turkey, Azerbaijan – then a crossing of Caspian Sea no less – and Turkmenistan. That is no easy movement for armed militants, without major intra-state passage assistance. The simplest route is clearly via aircraft, and concurrent regional US military aircraft operations represent a logical transit conclusion. Note, any alternative suggestion that ISIS cells independently sprung up in Uzbekistan and Tajikistan, only to then cross over and organize to fight the Taliban, makes absolutely no cultural, strategic or logical sense. A map illustrates the organized intra-state transit of ISIS from Levant to Afghanistan in simplest terms: 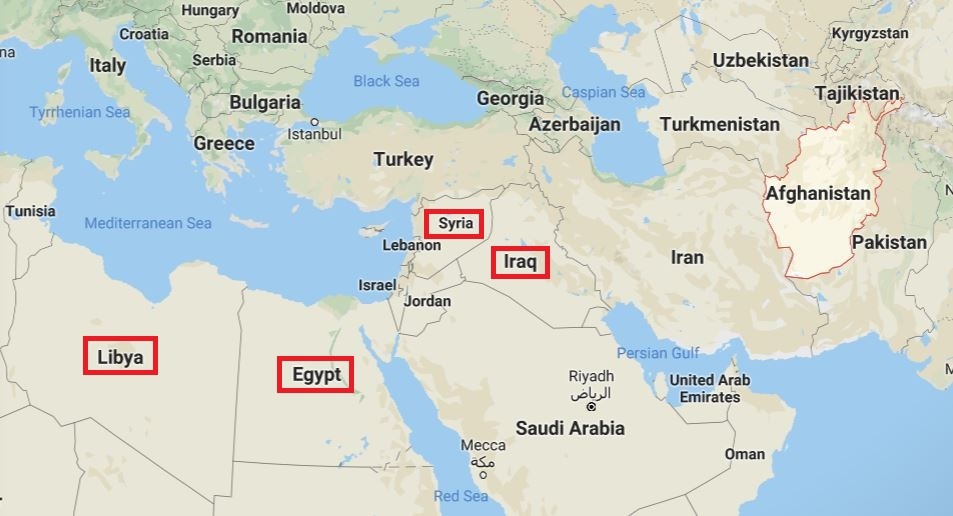 Taliban are the good guys. Because they are the indigenous.
ISIS are foreigners truck loaded in by the CIA just like Mexicans are into other nations.
Though the Taliban had some deep flaws in their past. Mainly their persecution of Shia. Perhaps they are ready to sign papers that they will no longer persecute Monotheist. Then perhaps both Shia and Christians militias can assist them in liberating Afghanistan from foreigners.

Taliban fights for some vital cause to eliminate illegitimate foreign forces like Trump and May forces etc from their land and rebuild it. What is the cause of ISIS and Al-Qaeda, to destroy Afghanistan.

I hope, one day, but the sad thing is, the Imperial banana republic will never leave, their minions, the mercinarys of the banana repubic is never leave, claims they are doing something while purverising another uh….. thing, an never ending spiral, for 17 years, but I know one thing, when Afgans one day can roam free in their own land, without anyone else, is the day Afganistan rises, its been in constant wars for eons, few have been in it for longer, empires after empires claws them self fast, when they leave, peace comes, and Afgans can deal with the future, and wars have marginalised a lot, groups have taken advantage of hard times, exstremism flurished when conditions are so bad as it have been in Afganistan, generations know nothing else but war, it will take time even to heal, but I am never the less optimistic, if Afgans can have their land back.
ISIS is not an problem, UssA is, period.

The hypocrasy is breathtaking, Taliban is Afgans, Afgans are Taliban, ordinary people under extraorinary circumstanses, and have fighted the largest army in the world, for soon 2 full decades, its an werid show watching their exuses for stil linger, when the only thing lacking is that they gets out of Afganistan, we never should have been there in the first place, the war on Afganistan is an crime against itellegence and humanity, the silence is an shame, to continue to spew bollocks to be there is an bloody shame.
Blessed be the peacemakers.

Your exactly right and this point is not made enough! ISIS are acting as mercenaries with the brainwashed religious idiots joining in thinking it’s some sort of Jihad. I have no doubt they are acting under the orders of the US and associates to provide an illusion of terror in the name of religious justice, while ultimately advancing the US agenda by placing pressure on non-compliant regimes.

i know!!been going on for years but the major media never admits it but yes this is going on and i back the taliban on these engagements and since the murder of 40 civs 2 weeks ago i am even more on the side of the taliban now in afghanistan!!

Israel, ISIS and alqaeda are US and UK babies. They would never vanish.

AH SHIT. I knew about the White helmets, the “moderate” terrorist vermin, but not ISIS….

Years ago when Mike Flynn was head of military intelligence, he warned the US government about ISIS, that it would take over the whole region. Looks like the US found ways to use them for their purposes.

I assume the US is giving ISIS intelligence air support, and lots of amphetamines?

ISIS in Afganistan = US Blackdresses contractors

You can call me Al
Reply to  Rhodium 10

The US really are the lowest of the low.