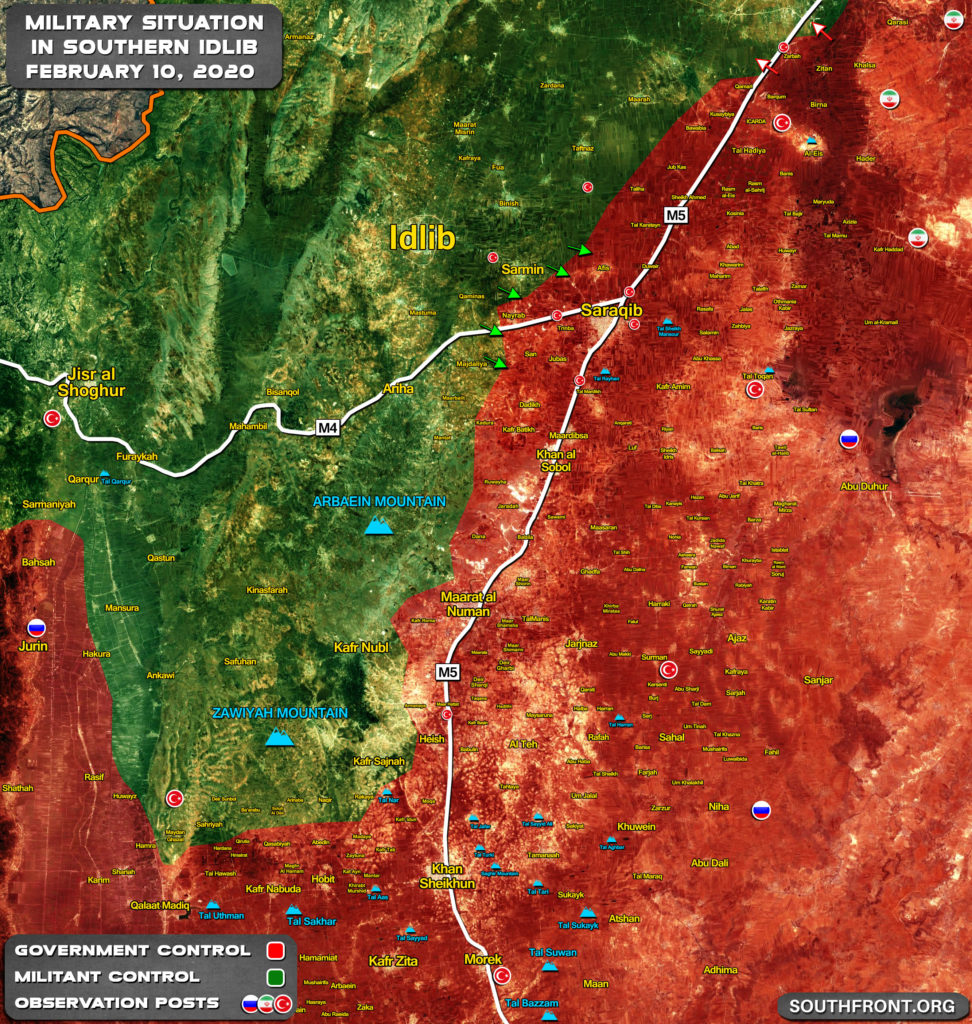 On February 10, fierce clashes erupted between the Syrian Army and forces led by Hayat Tahrir al-Sham (formerly the Syrian branch of al-Qaeda) near Nayrab, San and Afis in the province of Idlib. These villages are located just west of the town of Saraqib recently liberated by the Syrian Army from terrorists.

Pro-militant sources report that the attack is a part of the large operation to capture Saraqib from the army. Hayat Tahrir al-Sham and other groups involved are actively employing military equipment and weapons supplied by Turkey.

Turkish troops were already spotted near the frontline, while pro-militant sources report that Turkish artillery strikes supported the militant attack. 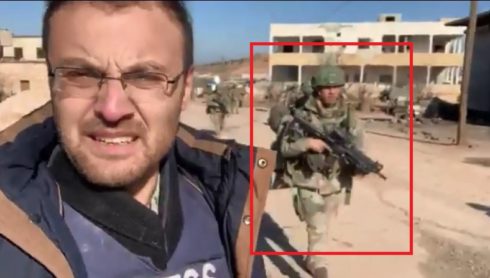 Earlier, Turkish President Recep Tayyip Erdogan gave Syria an ultimatum. He demanded the Syrian Army to withdraw from all the areas that it had liberated from militants since the establishment of the so-called demilitarized zone. The Turkish leadership ingores that all these areas were retaken from Hayat Tahrir al-Sham and other terrorist groups officially excluded from the ceasefire regime. If Syria rejects the withdrawal, Erdogan threatened the country with a declaration of war.

If Ankara really decided to direclty support the terrorists in their attack on the Syrian Army, these actions are a public example of the military agression against the country. It also demonstrates that Turkey’s claims on combating the terrorism are just empty words needed to justify its own foreign policy course.

Turkish Leopard 2A4 battle tanks were recetntly deployed in the province of Idlib:

I guess this was most expected. Saraqib is crucial for both sides. Now Turkey not only supports, supplies, funds, trains the terrorists but openly particapates in the attacks and therefore declared war, i wonder what the respons of Syria and Russia will be.

Backstabbing Backsliding Guttersnipe Erdogan back in the Yanki Toolbox. Hope SAA have not over stretched their lines and that those new T90 tanks are ready to roll from Tartus once the Russian 158 docks

It’s a risky move by Turkey and I only see a limited offensive operation to recapture Saraqib, relieve Idlib City and stabilise the front line. Anything more may lead to possible Russian casualties. We wouldn’t want the turkey to take on the bear.

Time to use some love on those turkish artillery positions..

TOS1 does a wonderful job..

Maybe time to for SAA to take all of Syria back from turkish terrorists as well..

I guess the SAA gameplan has changed now?…

Kill all turkoid invaders, one day the price for this historic injustice committed by turkey will be the final liberation of Constantinople.

Destroy them all SAA!!!! Remember – they are invaders, uninvited guests!!!!

Lupus
Reply to  Assad must stay

If turkish war planes are blocked by Russia from entering syrian airspace then this is a piece of cake for SAA and it´s airforce.

it all depends on Putin! simple.period!

without their airforce, the turkish inavders and their proxies are dead meat!!!

The question will always be re-iterated Why did Putin allow Erdogan to move in Syria through useless Astana agreement to risk SAA and allies life.

But what happens if the Turks also stop the SAAF and Russians air support by deploying AA systems and threatening to use them, Turkey’s moved a lot of assets into Idlib over the last few days and without air support from either side the fighting on the ground will be intense. Turkey and it’s proxies have had time to dig in and refortify new defensive lines and also prepared for a probable new SAA offensive, it won’t be as easy as it was before. On top of that Iran’s just called for a halt to current hostilities and wants the Turks to make a new agreement with Syria [they specifically said Syria not Russia], which means they don’t want an open confrontation with Turkey. remember that due to US sanctions Iran only has 2 current buyers for their oil, China and Turkey, if Turkey stopped buying Iranian crude the Iranians export revenue base will halve instantly, half the money to run their country and the military isn’t something the Iranians can afford, they won’t want an open confrontation with Turkey.

“Iran reiterates its readiness to facilitate dialogue among brother neighbors Turkey and Syria,” he wrote. “Escalation of tensions only serves interests of terrorists and their sponsors,” he added. “Avoidance of bloodshed and respect for sovereignty & territorial integrity is imperative,” he wrote. Iran’s Foreign Ministry said on Saturday that Iran is ready to help Turkey and Syria resolve their differences over the nearly nine-year-old war in Syria, adding that Tehran backs the sovereignty of its key regional ally Damascus. Zarif, in a meeting with Pedersen in Tehran, said Iran was prepared to help in the de-escalation of the crisis in Syria with respect to Syria’s independence and sovereignty. Zarif emphasized Iran’s full readiness for any kind of cooperation for sovereignty, independence, unity and territorial integrity of Syria, calling the political way the only solution to the Syrian crisis.”

Brinkmanship a-go-go; let’s hope that the Syrians hold their nerve, the Sultan won’t last long if they do. ;O)

Looks like Putin game pleasing Erdogan did not work. Erdogan has own agenda and played Putin for its advantage. Problem created by Putin. Now is Putin who has to fix.Putin has to realise Erdogan is not a partner or friend.

Joe you are absolutely correct.

Remember this one too. Never again! Free Syria! https://youtu.be/VQVDalGLW2Q

HTS AND Turkish Armies! WOw, how courageous guies, they are so sared at SAA. It’s already written they will obviously loose

1. First take all along the coastline to Jerusalem (noone would think to bomb their beaches).

2. Second go straight to Damascus and hang asshead and asthma on the branches of olive trees (Operation Olive Branches)

3. Take Aleppo to the sound of cheering civilians and heroic AlNusra Mujahedeen.

4. Take kurdistan all the way to Mashhad, throw khamenei down a well, and appoint Dr Ahmadinejad as Supremo Leader of Iran.

5. ban commies and their allies to the 60th Parallel North

Circle Jerusalem, enter Gaza first, and Gazans will tell us who to protect, and who to execute.

The war will come to the holy people sooner as you think! And than we talk again!

Yep, AlQaeda, HayatTahrirSham, and Turkey keepin it Real & as Holy Mujahedeen, against kikenyahudi, sisi the traitor, asshead the hyena, khamenei the geezer, and putin and xi, future prisoners.

Putin will bring an early thank Giving with burning Turkeys! The scum of the earth will get some russian nukes!

I already saw you about sdf, which you agree could split asshead and putin. I dont know and I dont care about this.

nato and axis are both unholy, and xi deserves to go back to his poor village to remember what he did to Uigurs.

And putin needs to go back to soviet prisons.

And asshead and his cucked wife (horses) should be tied and dangling on the branches of olive trees in damascus.

And khamenei that senile geezer should be thrown down the well.

AlQaeda, Taliban, HayatTahrirSham, and Turkey will take care of the Middle East. And nonMuslims will not be allowed near Makkah.

Hahaha listen to the takfiri go.

Have a nice day Mr I love ISIS.

Turkey will not allow their proxy forces attacked by SAA,rather it will sponsor and fund it’s proxies to keep Assad from defeating them,hence this conflict will drag TAF against SAA.

The final option is to apply Huthis operational tactic against Turkey rusty armory and make sure Erdogan never escape this onslaught.Erdogan risk everthing just finished is soldiers then the sultan’s in Turkey will turn against Erdogan.

Another detail of a false-flag-war that the Turkeys are playing: They have allegedly come to fight terrorism and take care for peace – but they are landgrabbing and ignoring the agreements on who is terrorist and who not. They are obviously siding with the beheaders and therefore they are on a terroristic trip too. So actually they are committing war crimes in Syria. Hopefully they are being asskicked by Saa & Allies.

It seems Erdogan just cannot get nato out of his system. He is working all sides for everything it’s worth whilst helping the sponsored terrorism in Syria. Not what you want or expect from a neighbour.

Duplicity works both ways. Memories run deep and Syria will not be on the floor for long.

So what will the other parties do now if this continues? The US or Israel might suddenly bring in more soldiers at the NE. The SE crossing is going to be bombed. Israel might move further inwards from Golan. Jordan might also be tempted to go in. Iran will be bringing in more of its soldiers. Russia will lose its no fly zone and wont be able to do much apart from Wagner. A civilian airplane might get hit or there might be chemical weapons deployed on a city. lol What a mess and a sure fire way for a wider regional war.

Lets just have WW3 and sort the USA and Europe out. Whatever the outcome, the USA,Israel and EU will be a wasteland where the Mad Max Hollywood movie could become a reality :)

Anybody can explain the motive behind the north-west bound movement of the SSA beyond Kafr Halab? Trying to cut-off Idlib city from the north perhaps?

The most import points right now are …..What will be the Russia respond to this Turkey action ? Will Putin continue pleasing Erdogan ?

The Syrian Army has been playing laser-tag with the terrorists for years now. Does Turkey think they’re any harder to hit?