An intense fighting between government forces and Ahrar al-Sham is ongoing in the Armoured Vehicle Base area in Damascus’ Eastern Ghouta. The base is located near the town of Harasta.

Ahrar al-Sham, supported by some units of Hayat Tahrir al-Sham, launched a new offensive on positions of the Syrian Army in the area on December 29. Since then, the sides have been clashing for control over this strategic facility.

The Syrian Arab Army (SAA) had repelled a major part of militant attacks and remained in control over the base. However, militants were able to capture some points in its vicinity. Some pro-militant media outlets even claimed that the base was fully encircled and separated from the rest of the government-held area. However, these reports were not confirmed.

On January 1, reports appeared that the Syrian military had decided to deploy reinforcements to the area in order to stabilize the situation there.

It’s important to note that Ahrar al-Sham resumed its military activity in Eastern Ghouta while the SAA was involved in a military operation against Hayat Tahrir al-Sham in southern Idlib.

UN, US and EU will probably critizise the Syrian government for not allowed any “aid” to the besieged parts of eastern Damascus – which is one big propaganda joke. It’s impossible to give aid to these thugs-controlled areas. The civilians aren’t allowed to leave the area and are being used as human shields. There is no other explanation why 400,000 voluntary stay in this area. The “rebels” (islamist salafist groups – terrorists) however, seem to be able to get ammo and other military equipment in a 6 year siege. Tunnels get discovered quite often but not to transport food to the civilians… These thugs let the civilians starve for propaganda matters.

Exactly. The terrorists must be burning far more calories than the civilians yet they’re not the ones starving. Clearly the terrorists have priority to the supplies. So at the very least, the terrorists should share equal blame for the situation there. But all we hear from western media is that it is the fault of Assad and Russia. If supplies can be smuggled in (which surely they are in order for the terrorists to hold out for so long) then the most at risk civilians could be smuggled out.

Actually Assad can set up a safe zone for all civilians to be and get food from there and announce it publicly.

Sure the terrorists will not allow it . This will weaken any claim by terrorists to starve the civilian population

Trump intelligent agencies themselves creating terrorist organizations in foreign countries, topple governments, arranging protests, uselessly bothering nations. World nations are now waking up slowly. Awareness is now growing up in nations. This a matter of time. Nations pass through Exams. Trump administration cannot fool nations any more. That era has gone. This is not 1970. This is 2018.

It would be intresting to have a map of the disputed area to get a better understanding of the situation. 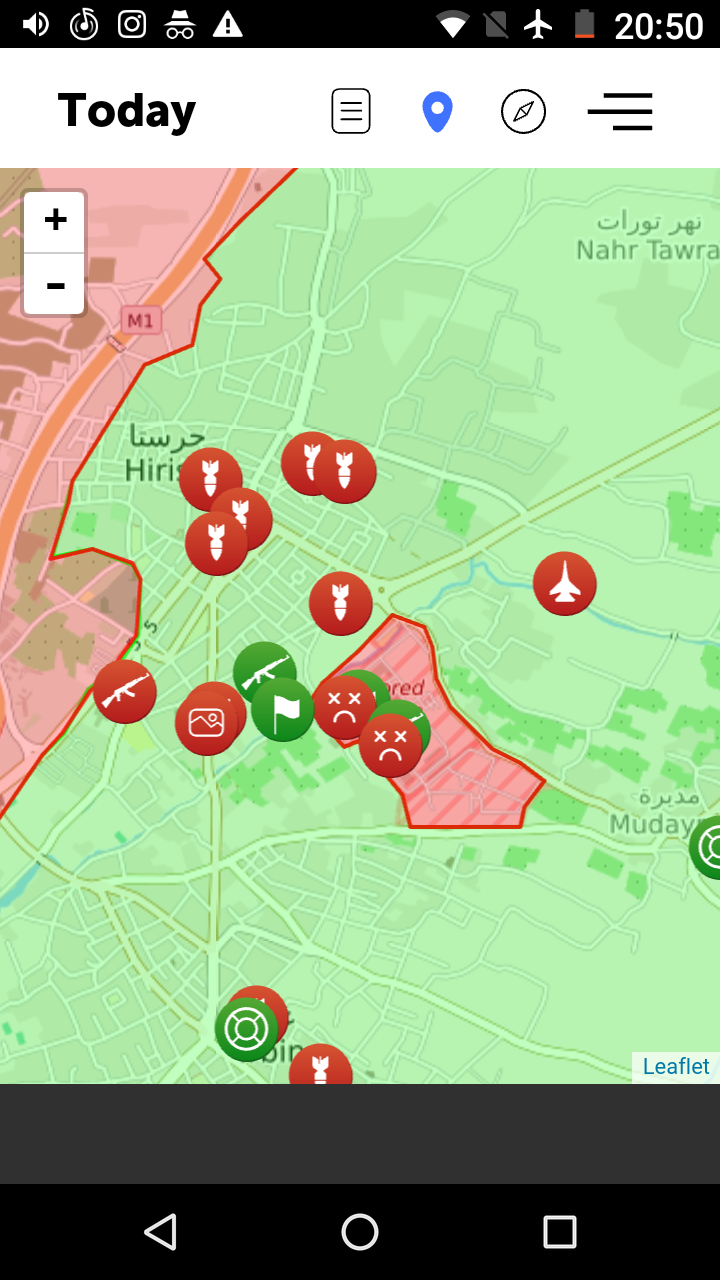 This map shows, like I read in other reports, that SAA has been largely overrun with a small besieged area still under control of SAA and a small part in the outskirts of Harasta.

A bit over the top one could say the base has been lost by SAA.

temporary situation. Kind of a pointless assault by the HTS. This war is lost, they are surrounded in a pocket, here come the gunships to turn rebels into chicken nuggets.

HTS is not involved in this fight.

Main group here is AAS and another group. No HTS at all.

you are right, i meant a band of sunni savages.

HTS is the main formation leading the battles. AAS, FAR, HTS & JAI are all in this combined, having violated a major cease-fire that Russia pressured on Damascus in August 2017. Ghouta lived quite peacefully for months, but this violation by militants may be the straw the broke the camels back. It certainly opens the door for the SAA to start hitting them back in earnest.

Quit possible you are right about the endresult of the Harasta offensive.

As for the area having been quiet for months, maybe correct. On the other hand, Iranian proxies, incl the SAA, have been attacking deescalation zones for months and I can imagine some opposition groups not waiting to be attacked on SAA terms but just stop waiting and attack themselves.

As maps indicate, the latest attacks by opposition forces are largely successful and they report killing in Harasta three senior assadist commanders, a general, a colonel and a PLA (?) commander.

At the same time AMN is reporting an expected opposition offensive in the Latakkia area. 2018 is, sadly, starting with a bang.

Bring the roaches out of the crack, makes them easier to bomb from the air. I know you are just a kurdish terrorist troll roaming these boards to say anti SAA lies, but your cowards will come to their ends soon enough. In the mean time, the bearded terrorists can sit around empty, cold ruins of a bombed out city, while the SAA reinforcements pick em off.

You seem to forget these cold ruins of a bombed out city are the inheritance of the Syrian young.

Seems to me compromising and then rebuilding is better than yet another shell of a city. Assad choice one can say.

Not exactly. That’s urban warfare and they dug lots of tunnels. A group of fanatics
can hold that pocket for months at least.

When they figure out that the area they captured is without civilians and Russians brought the flame throwers, they will be sorry. Right now, they are seasoning the chicken.

Meaning that they resume cooperation due to SAA pressure. Iraq have done a good job to close their border off to stop satelliting terrorist to reinforce their units.

Icarus Tanović
Reply to  as

Because SAA had job to do in Idlib, and didn’t concentrated its forces in that part of eastern Ghouta, so they’ve had intel from ‘someone’ that they can start attack on Avb in Ghouta.

I would’ve thought that it was common knowledge that the SAA had shifted their focus to Idlib? Just following this site showed me that. It’s just common sense to attack when the enemy is weakest. I don’t see how this equates to co-operation?

@worldonalert
7h7 hours ago
More
#Damascus: #Assad regime is accusing the #NDF of treachery. Reports that dozens of #Assad fighters joined the rebels at the #Harasta frontline.

The above is showing more is going on then we think.

At least for the moment large parts of the base are overrun.

this individual has gone totally nuts.
at least weeks ago you could argue with his comments

afaik, Assad has accused the SDF of treachery, not the NDF

Indeed, that is the correct question. A motivated answer is lacking.

This brave Palestinian girl is now in the hands of US sponsored pro-Trump foreign terrorists. She is so brave that she should have to be the prime minister of Palestine.

This girl may be a true Muslim or a true Christian or a true Jewish that is why she is now in trouble by atheist that call themselves true Jewish. I call them trash.

that face you make when you are totally grounded.

Rachael Cory, Christian Martyr for the Palestinian cause:

I thought Russia said the war was over?

The war against ISIS. The war of the US. What is US doing there anyway?

The situation in Ghouta is an official slap in Russia’s face, while all militant groups continue working united towards one goal.

The sad and increasingly pathetic reality is that they are still trying the same old crap, wasting irreplaceable time and opportunities. They are applying Obama era nonsense to a completely new set of dynamics, and failing.

This is a mad situation and looks like the Iepres salient (https://en.wikipedia.org/wiki/Ypres_Salient) in World War 1. Also some mad generals were really afraid to do a tactical withdrawal. This area is really hard to defend and will cost too much SAA soldiers. Best tactics during last weeks was to bring in tons of explosives and mines, than do a tactical withdrawal from the area, let the jihadist come in, push the button and after the explosions burn the area down with TOS-1 rockets. This issue could be solved later after focussing on Idlib. The Syrian generals missed a good opportunity and looks like cocky as the British generals in the Iepres battle. Please read the battle books and do your lessons learned!