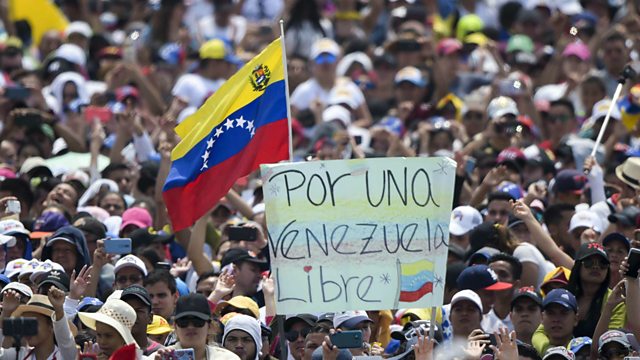 He arrived on the day before the deadline he gave for the entry of US humanitarian aid into Venezuela.

In a joint news conference with the presidents of Colombia, Chile and Paraguay, Guaidó suggested the Venezuelan armed forces had facilitated his arrival across the border.

“And I say thank you, and I thank the people of Venezuela, too, for their support,” he said. “Tomorrow, February 23, a month after assuming the presidency, all of Venezuela will be in the street to urge humanitarian aid to get in.”

“He is risking a lot,” said political analyst Dimitris Pantoulas, cited by the Washington Post. “Unless he’s sure the international reaction will have a big enough magnitude to leave Maduro with no option other than letting him back in. But the risk is too high and there’s no guarantee of what will happen. To me, it seems unnecessary.”

Colombian Foreign Minister Carlos Holmes Trujillo reiterated the Lima Group’s and his country’s support of Guaido and repeated a call to the Venezuelan Armed Forces to allow humanitarian aid into the country.

Meanwhile, at a news conference in New York, Venezuelan Foreign Minister Jorge Arreaza warned that “many Venezuelans don’t agree with Mr. Guaidó being in freedom. I hope justice will be done.”

On the same day, Venezuelan soldiers opened fire on a group of opposition supporters who were trying to keep open a segment of the southern border with Brazil for deliveries of humanitarian aid. According to reports 2 people died and 15 others were injured.

“Egregious violation of human rights by [President Nicolás] Maduro and those who are following his orders will not go unpunished.”

To Maduro’s military cronies attacking civilians at the Brazilian border – the world is watching and the perpetrators will face justice. The Venezuelan military should protect civilians, not shoot them. https://t.co/dLDfqoknNz

In response, Maduro’s government also organized a concert along the border with Colombia.

RT @MervinMaldonado: The Venezuelan patriotic people sent a clear message from the Concert For Peace and Life on the border in Tachira #HandsOffVenezuela PEACE SHALL PREVAIL! We support the CONSTITUTIONAL PRESIDENT@NicolasMaduro pic.twitter.com/ZINXg8EYdE #ManosFueraDeVenezuela

Maduro also issued an apology to the Colombian and Venezuelan people that the border between the countries would remain closed for a while, but freedom of passage would be restored swiftly, as soon as normality returns.

RT @DrodriguezVen: The Bolivarian Government informs the population that, due to the serious and illegal threats attempted by the Government of Colombia against Peace and sovereignty of Venezuela, it has taken the decision to temporarily close the […] https://t.co/Kv1RyIX9jN

RT @DrodriguezVen: The Bolivarian Government of Venezuela grants full guarantees to the Venezuelan and Colombian people to have safe border crossings. As soon as the gross actions of violence against our people and territory get controlled, border normality will be restored!

RT @DrodriguezVen: Demanding respect to elementary norms of the international law, we demand to @IvanDuque to cease in his infamous actions permitting the territory of Colombia to attack, by order of @realDonaldTrump against the right of the […] https://t.co/gnEdhuTkiy

All of the recent actions of the opposition, the US and its allies appear to be a sort of preparation for aggressions.

These include claims of the humanitarian aid being funneled to Cuba, Hezbollah’s presence in Venezuela and soldiers shooting “civilians” who were not breaking the law by keeping a country’s border open by force.

There were even attempts of spreading news of even Venezuelan allies such as Russia abandoning the country, according to reports of Gazprombank freezing Venezuelan assets among other things. There are constant reports of military officers defecting to the opposition’s side. There was also a recent report of Venezuela’s “Military atache” to the UN recognizing Guaido, who turned out to be the Deputy Atache.

All of this rhetoric attempts to construct a narrative in which the Maduro government is so “evil” that even its allies are backing off and leaving it to fend for itself. And if the Russian Foreign Ministry’s claims that the US is positioning special forces along the Venezuelan borders are true, then an intervention is edging even closer.

If the Venezuelan Government plays by the rules like the Ukrainian and Syrian Governments did, the result will be the same as in Ukraine and Syria. You can’t play by the rules when you are dealing with America. Any and all supporters of Guano should be summarily executed for treason. Any foreigners should also be executed for terrorism, and that includes Americans.

“Execute any foreigners” — well taken literally that’d also include myself; it reminds me a bit of Monty Python’s “I’d tax all foreigners abroad”. :-) But yeah, these acts of treason should’ve been dealt with weeks ago; this whole idea that you can avoid American escalation by playing nice and other deer-in-the-headlights acts… as you say, look where that got Yanukovich. This mentality “we can’t touch Mr. Guano, he’s taking money from the US” obviously only encourages others to take the shekels from the US. Hang the scum.

If Guaido comes in with that “humanitarian” convoy he should be arrested immediately and put on trial for high treason.

It doesnt seem a travel ban and collection of 10 mio signatures against a US invasion helps a lot.

Fears of military intervention increase after learning that Gweedo has IMF backing and desires to sell Venezuela’s oil and other natural resources to the Empire, while enslaving the average Venezuelan in eternal debt and hunger.

Any average everyday Venezuelan who falls for the propaganda and backs Gweedo to overthrow the country, will certainly deserve everything the IMF has to give like all those other countries indebted to the IMF. Those gifts, for the unaware, include austerity, loss of pensions, hunger, homelessness etc.