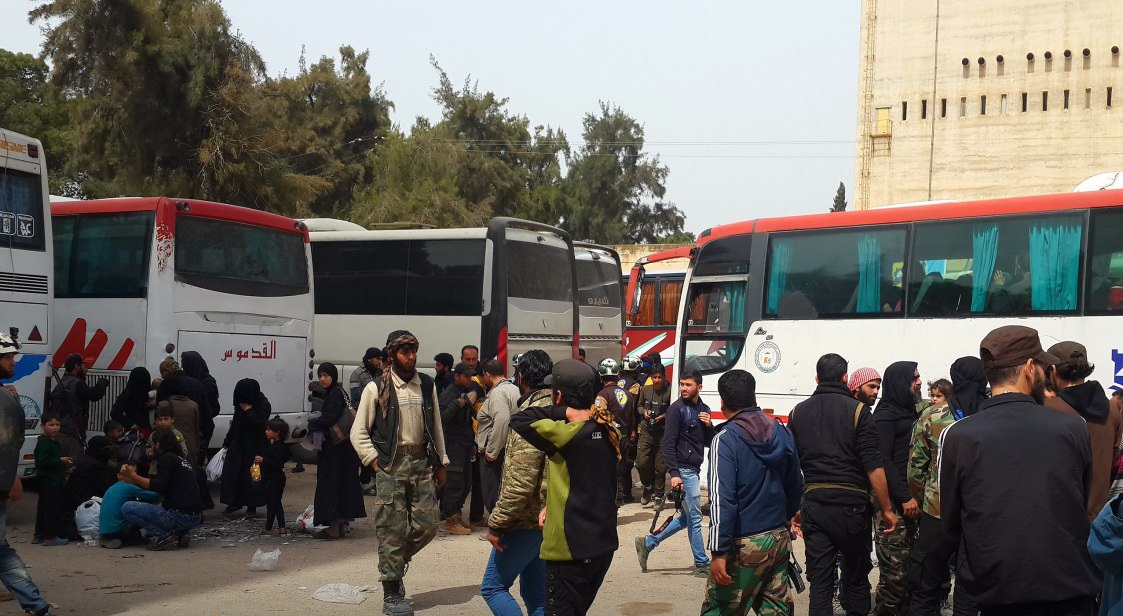 Fighters of Faylaq al-Rahman after arriving to Idlib governorate

On March 28, Wael Alwan, Faylaq al-Rahman’s spokesman, revealed that the militant group and Turkey are currently negotiating to settle in the Afrin area the militants and their families, who had withdrawn from the Eastern Ghouta region.

The city of Afrin and its countryside were captured by the Turkish Army and its proxies earlier this month.

According to the Syrian pro-opposition news outlet al-Etihad Press, Alwan said that Faylaq al-Rhaman wants to settle its fighters in Afrin because Idlib governorate is too crowded as many militants have withdrawn to it over the past two years.

“We hope they [Turkey] agree to this proposal, so far no agreement has been reached and it is still unknown who will be allowed to enter [Afrin area] fighters or civilians or both,” al-Etihad Press quoted Alwan as saying.

The UN said on March 14 that more than 170 civilians, mostly Syrian Kurd, had been displaced from their villages and towns in the Afrin area by the Turkish Army and its proxies. Those displaced civilians are currently living in refugee camps around the city of Tel Rifaat, which is also threatened by a Turkish military operation.

If Turkey allows Faylaq al-Rahman fighters and their families to settle in Afrin, the original people of Afrin may never be allowed back to their homeland, in what could become the biggest demographic change since the beginning of the war in Syria in 2011.

Turkey cannot decide on behalf of the Syrian government; otherwise, it surrenders its sovereignty to invader.

That’s the result of Kurdish stupidity.

They prefer Turks to rule than Damascus and trusted the US

Not at all, terrorists cleaning is right.

Syria should deport them to Jordan or Turkey. If they do not wish to settle in Idlib, they take their chances as refugees abroad.

Seriously though, the fact that they’re asking the Turks for permission pretty much confirms who now owns Afrin.

It is quite clear that the Russians have done a deal with Turkey on Afrin and surrounding countryside.

As long as they are citizens of Syria , why not ?

because the Turks in all probability aim to ethnically cleanse Afrin of Kurds and other ‘undesirables ‘ in order to replace them with more ‘acceptable’ inhabitants . Once this is achieved there will be a referendum where the newly installed ‘locals’ will vote to become a part of Turkey. Syria fragmented, Empires job done.

alternatively, Syria bombs the crap out of the interlopers and reclaims its territory

IMO , instead of forced deportations of Kurds TR will simply encourage ‘ acceptable’ Syrian inhabitants to settle there in order to dilute Kurdish population ,so no one can speak about an ethnic cleansing. And after creating its influence zone in the region , TR Forces will withdraw leaving some security posts there. I am sure that Assad will accept such terms instead of reclaiming its territory with force.

i’m pretty sure that many Kurds have already left Afrin ahead of the Turkish /FSA advance , and the jihadists desire to head to Afrin from Ghouta if granted is sure to lead to ethnic cleansing due to their inability to get along with anyone who isn’t a bloodthirsty sectarian beheader. of non wahhabis.

Send em elsewhere where their presence is less of a threat to the cohesion of Syria .

It is okay as well . No one can speak about an ethnic cleansing if there are no forced deportations. If they are leaving with their own will then there is no problem at all. After all this is what Kurds done in most of the regions they invaded , including Tel Rifat and Ayn El Arab.

Sounds awfully zionist to me…

Yes, but they must be treated as traitors to its country.

So they fear their chances the current the intra-Islamist militant HTS -SLF conflict in ldib.

Drop them off near al-Lataminah and let them walk from there. SAA ain’t Uber, ya Orcs!