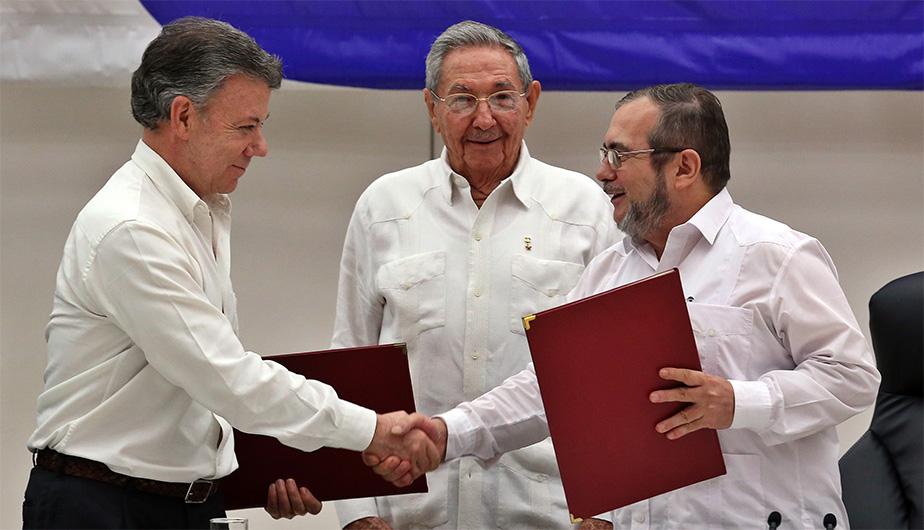 Juan Manuel Santos, Timoleón Jiménez (leader of FARC-EP) after signing the peace agreement, Raúl Castro in the back

The Colombian Revolutionary Armed Forces – People’s Army (FARC-EP) assured on Friday that they want to seal the final agreement in Cuba, the so-called World’s capital of peace, as claimed by Iván Márquez.

Iván Márquez’s declarations took place after the Colombian president Juan Manuel Santos claimed on Thursday that the final pact with the insurgent group to finally put an end to the armed conflict would take place in Colombia.

“We (FARC-EP) wish that the peace agreement is signed in Havana, for it is a position of justice”, the chief of the negotiations team of the insurgency claimed.

In this sense, Márquez said that they’ve worked for over five years making all efforts to reach agreements, which he catalogued as a “very difficult” process that in the end will benefit both parts.

The delegate of FARC-EP stated that both Cuba and Norway opened their doors as guarantors of the peace process, as Venezuela and Chile are companion nations.

Márquez mentioned that the insurgent chief Juvenal Ricardo Palmera aka “Simón Trinidad”, imprisoned in the US, would be in charge of coordinating the arms withdrawal process. In regards to this petition, the US Secretary of State, John Kerry, gave us hopes, the insurgent delegate said.

Also he inferred that this achievement will lead the government and the insurgent group to the Final Agreement if the guidelines are fulfilled as it was established.

FARC-EP and the Colombian government are dialoguing in the Cuban capital to reach a peaceful ending to the armed conflict that has been taking place in the South American nation for over 50 years.

The dialogues started on 2012, and until now they have reached advances in issues like an integral rural reform, political participation and illicit drugs. With this new agreement there are a few aspects left to put an end to the war.

220 000 dead, over 25 000 disappearances and almost 30 000 kidnappings are the result of the conflict in Colombia, according to a publication of the National Center of Historic Memory (CNMH).