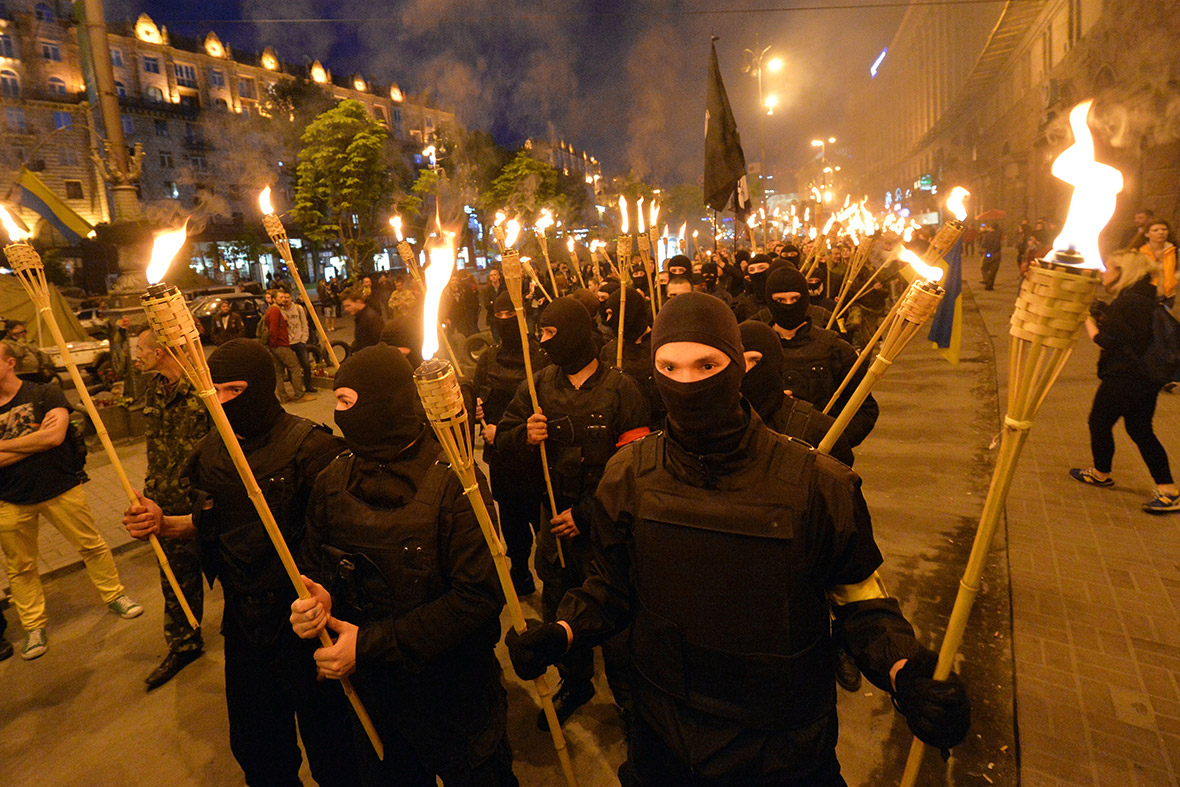 Zelensky is incapable or unwilling to deal with the Ukrainian Far-Right.

Ukrainian President Vladimir Zelensky was believed to be a reformer and a liberal when he took over the presidency from Petro Poroshenko. The billionaire former president is part of the corrupt oligarchy who from 2014 relied on neo-Nazis to fight and kill Russian-speaking Ukrainian citizens in Donbass (Eastern Ukraine). Zelensky, a comedian and actor before becoming president, promised to bring peace to Donbass when he won the 2019 presidential election. Due to Zelensky’s public detachment from the oligarchs, he was hailed in the West as someone that could bring Western liberalism to Ukraine.

However, as recently as August 5, the Ukrainian president demonstrated that he has not deviated from the reactionary and extremist ideology of his predecessor. Zelensky said on the Dom TV channel that “for the sake of your children and grandchildren,” those who identify as Russian in Donbass should “go find a place for yourself in the Russian Federation.” Effectively, he called for the ethnic cleansing of Russians in Donbass, irrespective of the fact that Donbass has been an integral part of the Russian homeland since the 1600’s. It cannot be overlooked that Zelensky’s call for Russians to be ethnically cleansed from Donbass is in violation of the European Convention on Human Rights and the United Nations Universal Declaration of Human Rights. He received no condemnation from the EU or the UN.

As the war in Donbass is extremely unpopular, the Ukrainian ruling class uses the country’s Far-Right, including neo-Nazi forces who played a central role in the 2014 coup and the following war. Zelensky, despite being Jewish himself, understands this reality and has not hidden away from using the Far-Right in his antagonizations against not only Donbass, but also Crimea.

Former Ukrainian Minister of Internal Affairs, Arsen Avakov, even appealed to these forces on Facebook, describing them as “patriots” in his urgings for them to prepare for war against Russia to “protect the Motherland.” Although Avakov ultimately resigned in July, it was under him that Far-Right militias, including the neo-Nazi Azov Battalion, came under the control of the Ministry of Internal Affairs. Andriy Biletsky, a founder of the Azov Battalion, is a close associate of Avakov. Biletsky also co-founded the neo-Nazi Social-National Assembly movement.

Denys Monastyrsky is now the Minister of Internal Affairs but is being labelled as “Avakov’s man” because of his known connections to those within his network. Effectively, Zelensky replaced Avakov – whose son Oleksandr participated in the 2014 Siege of Slaviansk, with one of his lackey’s who will continue to serve his personal interests.

However, government connections with Far-Right organizations and ideology are not only limited to the Ministry of Internal Affairs, but is a consistent feature across the entire state apparatus and is being forced into Ukrainian consciousness.

Ultra-nationalism has reached such absurd levels in the country that Zelensky was photographed holding a Ukrainian national team jersey ahead of the Euros 2020 football tournament that had the message “Glory to our Heroes,” a rally cry during the 2014 Ukrainian military aggression against Donbass. UEFA, Europe’s top footballing body, found that the slogan on the jersey was “clearly political in nature” and forced its removal. Although a slogan on a jersey may at first appear to be a non-issue, it does signify the ideology of the Ukrainian state and their attempts to normalize it in society.

Although Zelensky was heralded as a potential liberal reformer in Ukraine, it appears that patience in the U.S. is running out. The CATO Institute, an influential libertarian think-tank founded by billionaire Charles Koch, even had to concede that “U.S. officials have long been fond of portraying Ukraine as a plucky democracy fending off the menace of aggression from an authoritarian Russia. […] Several actions that President Volodymyr Zelensky’s government has taken in recent months are alarmingly authoritarian” and “trying to portray Ukraine as a model democracy deserving U.S. protection on moral grounds is even more far‐​fetched.”

The irony is that Ukrainian ultra-nationalists believe that Zelensky is soft on Russia. However, the reality has shown that Zelensky should have remained as an entertainer and a comedian, and not a politician as he has proven himself to not be any better than Poroshenko. In fact, the CATO Institute argues that “as bad as the situation [in Ukraine] was under Poroshenko […], it has grown even worse under his successor, Zelensky.”

Zelensky’s first assistant, Sergey Shefir, already revealed that the president will return to show business within five years. This suggests that Zelensky acknowledges he is not a politician. Although he appears or is portrayed as a liberal, it has been proven beyond doubt that he is incapable or unwilling to break the Far-Right in Ukraine. Under his presidency, extremist ideology has not only been consolidated, but is now being pushed into the mainstream, just as the stunt with the Euros 2020 jerseys and the replacement of Avakov with one of his lackeys clearly demonstrates.

The Ukraine Is doomed!!

All for the sake of gimp,Ukraine,harden the fk up fascism is doomed: