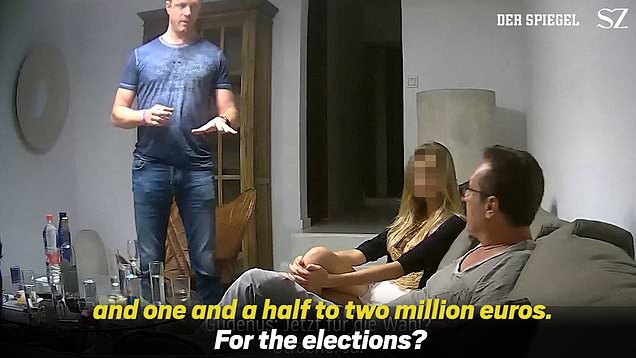 The publication included a video allegedly showing his coversation with ‘Russia-linked’ persons. The reports claimed that he was offering German contracts to an alleged Russian benefactor in return for ‘Russian investitions and support’. The video also included a woman that was described by media as a niche (or daughter – depending on the version) of some Russian oligarch.

On the next day, Strache announced his resignation from the post of vice-chancellor of Austria and leader of the Austrian Freedom Party (FPÖ).

Just hours later, in the evening, Austrian Chancellor Sebastian Kurtz announced the disband of the coalition government between his Austrian People’s Party and the FPÖ.

On May 20th, another German outlet, Cicero.de published an article named “Was it Mossad?” by a former career diplomat, Rudolf Adam, who was the deputy director of the German intelligence service, known as the BND.

An article by a former German secret service official meant that the BND tried to disown the political scandal in Austria, pointing to another possible culprit – the Israeli intelligence Mossad.

Adam provided a number of arguments attempting to prove that the Israelis did it:

“Anyone who wanted to confront the expanding Union of EU Right-wing national parties, had to act now.”

One day after the May 20th article was published on Cicero.de, a German TV channel, the n-tv, featured a comment by another former head of the German BND, Augustus Hanning. He acknowledged the fact of “serious interference” in politics and the illegal nature of the secret video recording of the Austrian politicians.

Hanning acknowledged that this was possibly a special services operation, but did not make any accusations.

Without making any assumptions, Hanning explained that the most important issue that is currently being addressed is who is behind these actions.

Media rights expert Marcel Lieser also said in an interview with n-tv that the creation of such records “is unambiguously punishable under German law and, therefore, unacceptable under civil law.”

At the same time, the content of Adam’s interview was scrutinized by epochtimes.de, expert Reinhard Werner pointed out the following:

“Adam’s reasoning contradicts the facts.” According to him, ever since Heinz-Christian Strache came to lead the FPÖ, there have been more favorable remarks towards Israel.

“Strache’s line was different from that of Jorg Haider, who maintained contacts with the authorities of the Arab states. Anti-Israeli attacks in the EU come exclusively from left-liberal governments, such as in Germany, Sweden or Ireland,” Werner said.

According to him, Adam’s claims may simply be a way to remove suspicion from the European states, with such a loud proclamation.

“In the social networks, Mossad is synonymous with the Jewish World Conspiracy, and it is in this context that the article of the former deputy head of BND [Adam] is shared by FPÖ supporters. For some reason, the former head of the BND, Hanning, is worried about the “political culture” … A man from the special services, whose most important task was to prevent betrayal and allow tapping of thousands of people – suddenly worried about surveillance inside of a house?”

Thus, rather than clearing any suspicions, the statements by the former BND officials raised even more questions and made the situation even more suspect.

The specific motive was also completely visible. The new chairman of the Christian Democratic Union of Germany (CDU) and Angela Merkel’s successor, Annegret Kramp-Karrenbauer said that the FPÖ will now face an institutional crisis that will spread to the right and far right all across Europe.

The chairman of the Council of European Rabbis (CER), Chief Rabbi of Moscow Pinchas Goldschmidt, pointed out that an attempt to accuse Israel of actions to undermine the European right resembles classical anti-Semitism. Up until then the Israeli side, be it Mossad or any other official kept silent.

Following that on May 22nd, German outlet Bild published a report on the participation in the charade by a lawyer from Vienna, with an Iranian origin, Ramin Mirfahrai and a well-known pseudonym of an owner of a private detective bureau in Munich.

It was Mirfakhray who brought together the presumed niece of the Russian oligarch Makarov with Johann Gudenus.

It seems that the presence in the case of Mirfahrai plays in favor of the version of the involvement of “Mossad.”

And, finally, on May 28th, Austrian outlet Kronen Zeitung published the story on the Austrian-Iranian lawyer and the detective. They were assisted by two wo corporate security specialists specializing in industrial espionage.

The Russian oligarch’s daughter turned out to be a Bosnian student, who was paid EUR7,000 to play a part in the sting operation.

And then they sat on the recording because nobody would pay them upwards of EUR 1 million and finally allegedly sold it for EUR 600,000.

Both the Israeli Mossad and the German BND are equally suspicious. A criminal group hired to create compromising material on FPÖ leaders could act blindly or through an organizing agent in their ranks.

However, the version can be equally considered that if the special services are not involved in the case, then it was organized by the European and Western establishment struggling to preserve their positions or those who are called “financiers” in the current global confrontation.

This case demonstrates how ‘Russian interference’ hysteria is being exploited by various parties to achieve own political goals and settle own scores. The exploitation of the ‘Russian threat’ narrative allows provide little facts and defeat any scepticism. Nonetheless, some times media forgeries appear to be collapsing and then the public audience gets details about the reals faces behind fake Russian oligarchs and special agents ‘interfereing’ into the European politics.

The FACT is that the Jew corporate media is poisoning the dumbass western sheeple with Russophobia so that there is growing hatred towards Russians, the same way the Jew fucks and the Americunt arseholes have been demonizing Muslims and now the Chinese even.

This is a good analysis and write up of this very important incident. However there is a better write up about this that is much more to the point at this other website that gets right to the heart of the matter. I post the link below: – https://dailystormer.name/israeli-kike-allegedly-behind-austrian-honey-pot-sting-on-right-wing-politician/

shallow summary. whats missing is the socialist´s Party scandal about their media-consultant Tal Silberstein… could be possible that the socialists teamed up with the local austrian secret service (40years+ dominated by socialists) to blackmail the FPÖ liberal Party… this is the most likely version

Multiple journalists were detained in a Swiss airport after filming Bilderberg participants arriving on the first day of the elite gathering of mostly Jew owned global corporations.

Journalist Dan Dicks and his crew were attempting to interview the new arrivals before authorities held them in a detention room in the Geneva airport for 20 minutes on Thursday, according to a video published on the Press For Truth YouTube channel.

“Looks like our friend is being detained by the police,” said Dicks. “That is not good using police to suppress journalism.”

Gert-Schmidt is in this case leading investigator, his site: http://www.eu-infothek.com/ in fellner live – leading journalist in austria – he said, that “liquid cocaine” was given in the drink from strache: https://www.oe24.at/tv/fellnerlive/Fellner-Live-Gert-Schmidt-im-Interview/382137784 “liquid cocaine” doesnt exist on drugmarket

Doesn’t really matter who it was though this article probably hits the nail. The fact that Strache fell into this trap only proves he’s an idiot – it’s not like this was totally unpredictable. With Haider’s assassination on the 11th October 2008 the FPO should have been warned, but unfortunately there haven’t been the brightest heads leading the Freedom Party since then. There is only one way to beat the Zionist: Be smarter than them! Long live Assad – I have high hopes for Syria’s President!