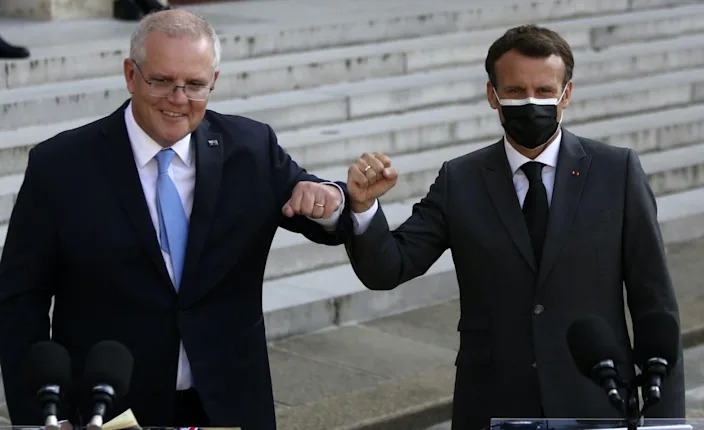 France is upset that the United States and the UK will share nuclear submarine technology with Australia.

French President Emmanuel Macron’s team was outraged at Biden’s announcement, because it ruins an agreement for Australia to purchase French submarines.

“The American choice to exclude a European ally and partner such as France from a structuring partnership with Australia, at a time when we are facing unprecedented challenges in the Indo-Pacific region … shows a lack of coherence that France can only note and regret,” French Foreign Affairs Minister Jean-Yves Le Drian and French Armed Forces Minister Florence Parly said in a joint statement on September 15th.

The American observers hailed the agreement as a major strategic advance for Australia and a testament to the power of the U.S. alliance network, in defiance of China’s argument that the chaotic U.S. withdrawal from Afghanistan foreshadows future failures of American support for allies.

Macron’s government regards the announcement as a breach of trust by Australia and a sign of disrespect from Biden that enhances the need for “strategic autonomy” from the United States.

“The regrettable decision … only reinforces the need to make the issue of European strategic autonomy loud and clear,” the French leaders said. “There is no other credible way to defend our interests and our values in the world, including in the Indo-Pacific.”

Biden’s team cited the United Kingdom’s involvement in the deal as a mechanism to bring a transatlantic ally into the Indo-Pacific, as U.S. officials try to manage and deter looming threats from China.

“These relationships with Great Britain and Australia are time tested — our oldest allies, generally,” a senior administration official told reporters earlier Wednesday. “This is designed not only to strengthen our capabilities in the Indo-Pacific but to link Europe, and particularly Great Britain, more closely with our strategic pursuits in the region as a whole … Great Britain is very focused on the concept of ‘global Britain,’ and their tilt is about engaging much more deeply with the Indo-Pacific, and this is a down payment on that effort.”

Biden extended an olive branch to France, the oldest ally of the U.S. while implying the new deal represented an example of London following Paris’s lead.

“Indeed, this effort reflects a broader trend of key European countries playing an extremely important role in the Indo-Pacific,” Biden said. “France, in particular, already has a substantial Indo-Pacific presence and is a key partner and ally in strengthening the security and prosperity of the region. The United States looks forward to working closely with France and other key countries as we go forward.”

The deal simply makes it so Australia will not purchase $90 billion worth of diesel-powered submarines from France and Macron and his aides are understandably upset.

“The world is a jungle. France has just been reminded this bitter truth by the way the U.S. and the UK have stabbed her in the back in Australia,” former French Ambassador to the United States Gerard Araud wrote on Twitter. “C’est la vie.”

This is yet another example of unfair competitive practices and approaches that are commonplace for the United States and it frequently accuses its adversaries of specifically doing.

And according to the current polls, our French American Foundation Young Leaders government will continue to follow the US wills in the next 5.5 years: clever electors.

No sweat, France will turn around and sell these subs now to a soweet ass muzlim toady like sawdi judea or UAE or Egypt…..one of them muzlim toadies. It never fails.

Your gonna be buying those subs little boy from india.

doc…you are still here no?ugly iranian aganvadze roohani no? suffering from famine, selling your women all over the world no?Do you have honour no?getting the drift no?Fake country with fake religion no?

Ironic is that india at its current juncture cannot afford these french sub even.

They haven’t laid an iron bar yet for these subs, never mind a keel. This time, France didn’t get to keep the product, like they did with the 2 Mistrals they built for Russia.

Yes, but is still a fire sale. French virtually gave two Mistral Class ships to Egypt after US blocked sale of completed vessels to Russia.

what a surprise…. the empire backstabbed its puny vassals again 😄

This is French karma for not honoring the sale of two new landing ships to Russia veveral years ago.

Russia should offer to take them from the French, just for a troll. lol

I will say one thing for the French they have lways been more independent than most US vassals,thtas why even in WW2 the Americans hated De Gaulle leader of the free French.

The 5 👁 countries receive a better treatment from US as they are ‘relatives’, all the other ones are treated as colonies, the frenchies can leak them as much they wish but this is the kind of treatment that they will receive

The poodles are gonna just sit and take it up the wazoo. That’s the position of being a lackey, a lapdog. Sit ubu sit!

Meanwhile, BloJo is convinced that the submarines will be built in Britain, lol.

The USA will of course get the contract, selling more of their dodgy equipment to Australia. It will of course, mean a lot of time for Aussie sailors in the USA, while their new subs get a new light bulb fitted as per contract stipulations.

What comes around goes around. Due to US pressure, France screwed Russia over Mistral Class attack ships cancelling fully contracted sales. Now, due to US pressure, Australia is going to screw France over diesel class submarines, cancelling negotiations and sales. French are getting their cancelled shipyard exports karma, and manged to get DOUBLE shafted by the US in the process. Maybe, they should learn something from that?!

There is something else of note here. Australia is a nuclear free country, no nuclear power stations. Now, in 2000’s British proposed dumping their spent nuclear waste in Australia’s remote desert center. Their plan was little more than to dig giant hole and fill it. British spent money on sending lobbyists to try and push this with Australian politicians and media. However, it didn’t occur to British, with an arrogant ex-colonial attitude, this would be wildly unpopular in Australia, not least because the continental water table is a vast complex of underground cave systems. So any negotiations with British over nuclear technology, and fuel disposal, may yet see the British drag this issue up yet again.

So, which other European countries have territories in the Indo-Pacific?