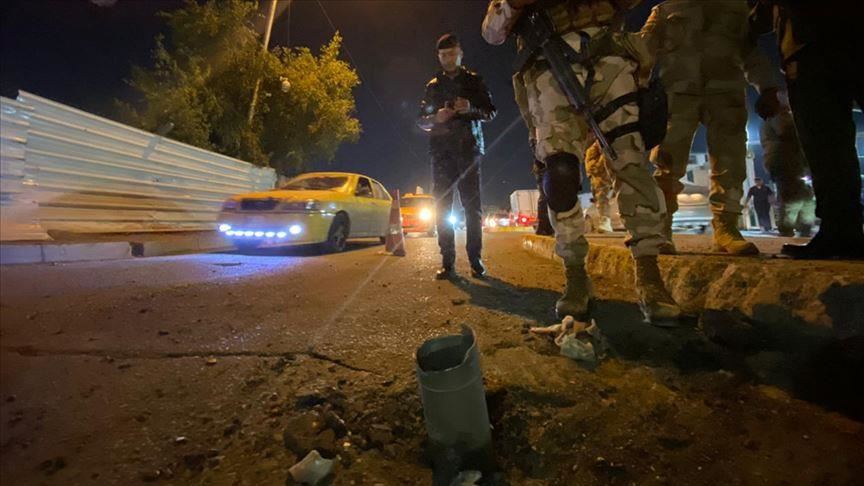 The three Iraqi children and two women were from the same family and were killed when a rocket targeting Baghdad airport, where US troops are stationed, fell on their home instead, the army said in a statement.

The rockets were launched from the al-Jihad neighborhood of Baghdad.

The military accused “cowardly criminal gangs and groups of outlaws” of seeking to “create chaos and terrorize people”.

It said Prime Minister Mustafa al-Kadhimi had ordered the arrest of the perpetrators and said “these gangs will not be allowed to go around and tamper with security” with impunity.

This is the latest attack on American positions in Iraq, but this time it led to civilian casualties.

Between October 2019 and July 2020, at least 39 rocket attacks targeted American interests in Iraq. A similar number again has taken place in just August and September.

Rockets often target the US embassy in Baghdad, within the heavily fortified Green Zone, and US troops present in Iraqi bases as well as the Baghdad airport. Roadside bombs have also targeted convoys carrying equipment destined for US-led coalition forces.

No group has claimed responsibility for the latest attack.

Influential Shiite cleric and politician Moqtada al-Sadr has called for a commission of inquiry into the rocket attacks, a proposal backed by Kadhemi.

The Popular Mobilization Units dismissed several commanders accused of links to attacks on western interests, while denying responsibility for the acts of groups claiming PMU links and “carrying out illegal military acts against foreign interests”.

Oops, sad, but time for Pimpeo and the lardarse Americunts to haularse out of Iraq. The losers are done. The intensity of resistance will only grow in Syria as well.

The dumbfucks have ZERO chance of doing anything to Kataib Hezbollah as it is the Iraqi army, just like Hezbollah in Lebanon is the Lebanese army as Shia are the majority. If the Americunt losers kill more civilians in spite, they will get attacked more. It is over for the stupid dumbarses, they have lost and Syria is next. People in the region are fed up of Jew and Americunt parasites, that have plundered and destroyed the region.

“Hezbollah in Lebanon is the Lebanese army as Shia are the majority” Shiites are only 30% of Lebanon’s population. Get your facts straight. 30% isn’t even 1/3 of a population, let alone half, or a majority. Shiites dominate the other groups because they have an army different from that of the state.

In Iraq, the PMU is not Iraqi army. You must be kidding to think that people will believe you about PMU being an official army. they’re neither in the navy nor airforce. They are disobedient to the prime minister. And they take actions outside state control. They also take orders from abroad. they intimidate other faiths, and they have poor command and control structure. Most are divided into groups loyal to certain individuals despite all of them being Shiite. If this is your idea of an army, then there’s no reasoning with you.

igybundy
Reply to  The Objective

The PMU gets paid by the Iraqi state and is under the command of the PM.

The Objective
Reply to  igybundy

A few members of the PMU. Kataib Hezbollah is quite different

You’ll soon know if your fucked up resistance was worth the cost. When you keep talking resistance, I think of it as folly. Resisting by creating parallel armies in other people’s countries is absolute madness. Civilians are immediately endangered. Governments are impotent. International relations weakens as countries doubt the government’s sovereignty. It breeds instability where anyone can hold guns and claim to be a group outside of government control. A good example of the risk to civilians is this rocket attack in Baghdad that killed 5 innocents. Rockets supplied by Iran. Again America is threatening war if the attacks should continue. I expect the coward militias to pause their attack for the moment. Pulling America’s diplomats out of Iraq is a prelude to war.

igybundy
Reply to  The Objective

bring it on gurly boyz…

The Objective
Reply to  igybundy

US has very few options left besides stealing Iraqi and Syrian oil, which in turn breeds resentment and resistance. Iraq was a prosperous country and now impoverished by US industrial sized theft.

The Objective
Reply to  d'Artagnan

You Iranians keep reemphasizing America’s evil doings in the hope that people will ignore Iran’s even more dangerous evil. However, with opposition mounting against you online, most people will understand that there are more than one bad guys in the Middle East – Iran being one of the worst.

There are lots of resistance groups with varied levels of proficiency.

The “Iraqi” resistance forces (at least they present themselves as Iraqis) again kill only Iraqis. Because it is simply easier and risk-free. If they want to attack Americans, they will have to warn about it two hours in advance. And if an American soldier happens to be wounded, the Iranians could lose another general. So the Iranian militias are concentrating as usual on killing Iraqis.

Maybe there is no TV in your cave, the Iraqi resistance has killed thousands of US and other occupation forces and that strategy has caused their flight. The US is even shutting down its $3 billion embassy as rockets land daily.

Does the mullahs regime have a special branch for strange names? How many Americans have they killed this year? The whole world sees your cowardice. You are experts in killing Iranian protesters and Iraqi civilians. Americans and Israelis feel very safe in the Middle East thanks to your cowardice. I will write this for the thousandth time – your unjustified arrogance has turned a country rich in natural and human resources into a failed and isolated third world country.

I’m glad you enjoyed it.

US destroyed Iraq and caused misery for all, including itself, it is time to go home and take care of your banana republic.

US failed, lost face, lost the war, committed horrendous crimes against Iraq people and now has to leave and deal with the upcoming civil war in the failed state. Iran’s patience and strategic thinking won the day. End of story.

“No group has claimed responsibility for the latest attack” So this time, none of the cowards have the guts to claim responsibility. I hope the day comes when America bombs the shit out of these bastards, and seize Iraq out of the clutches of Iran and hand it back to the Iraqis.