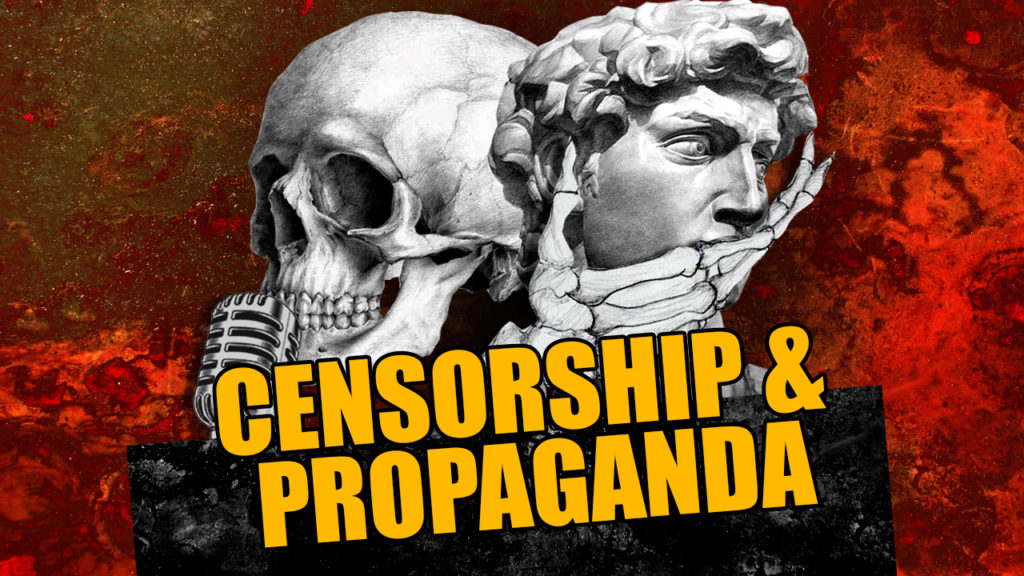 Over the past three years, Facebook has been removing accounts for participating in what they call “coordinated inauthentic behavior” (CIB). According to Facebook’s head of cybersecurity policy, the Orwellian term refers to when “groups of pages or people work together to mislead others about who they are or what they’re doing.” Facebook takes down accounts for CIB due to “deceptive behavior” not for sharing false information. In the latest purge, Facebook removed accounts from two news outlets, SouthFront and News Front.

The two outlets have no affiliation; the only thing they share besides the word “Front” in their names is content that does not toe the Western mainstream media line. In its effort to remove CIB and limit “disinformation,” Facebook partners with the Atlantic Council’s Digital Forensics Research Lab (DFRLab). The Atlantic Council is a Washington-based think-tank that receives funding from Western and Gulf State governments, defense contractors, and social media outlets. Some of its top contributors for the 2018 fiscal year include the British Foreign and Commonwealth Office, the Embassy of the UAE to the US, the US State Department, Lockheed Martin, and Raytheon.

Facebook started releasing monthly CIB reports in March that detail the networks and accounts they take down. On May 5th, Facebook released its CIB report for April 2020. The report says Facebook removed eight networks of accounts, pages, and groups engaging in CIB. SouthFront and News Front are included in the first network covered in the report. “We removed 46 Pages, 91 Facebook accounts, 2 Groups, and 1 Instagram account for violating our policy against foreign interference which is coordinated inauthentic behavior on behalf of a foreign entity,” the report reads.

Facebook claims they linked this activity to “individuals in Russia and Donbass, and two media organizations in Crimea – NewsFront and SouthFront.” In a response to the report, SouthFront says the claim that they are based in Crimea is a “blatant lie” that they are willing to “defend in court.” SouthFront says the organization is made up of “an international team of independent authors and experts,” some of whom are from Russia and post-USSR states. News Front, on the other hand, is based in Crimea, but the organization does not try to hide its pro-Russia bias.

In a press release, the Atlantic Council’s DFRLab announced Facebook’s removal of the two organizations. The DFRLab refers to News Front and SouthFront as “two Crimea-based media organizations with ties to the FSB.” The FSB is a Russian security and intelligence agency, a successor to the Soviet Union’s KGB. In its independent analysis of the two outlets, the DFRLab offers little evidence to back up the claim of FSB ties. The analysis only uses a 2017 story from the German outlet Zeit, where a former News Front staffer claims the organization receives funding from the FSB. The DFRLab offers no evidence to link the FSB with SouthFront.

The DFRLab does not make a strong case for Facebook’s removal of the news outlets. The press release says, “While the DFRLab could not corroborate Facebook’s finding of CIB, it also found no evidence to contradict it.”

But using Facebook’s definition of CIB, the DFRLab’s analysis of the two outlets does seem to contradict Facebook’s findings. The pages and users analyzed do not seem to be misleading others or hiding who they are. “Most of the assets that DFRLab had access to did not hide their connection to South Front or News Front. Many of the pages wore their connections on their sleeves, naming themselves as different language versions of the websites,” the analysis reads. News Front is an international news organization with websites in English, Russian, German, Spanish, French, and Georgian and had Facebook pages to reflect that.

The analysis goes on to address the only connection between SouthFront and News Front, and probably, the real reason why they were removed from Facebook. Both outlets share stories that go against the Western narrative. The example the analysis seems to take the greatest issue with is stories that take into account Russia’s denial in the role in the downing of Malaysian Airlines Flight 17 in eastern Ukraine in 2014. The analysis also points out that News Front accounts shared news stories from Russian-state funded media outlets like RT and Sputnik.

Ultimately, the DFRLab does not provide any information linking SouthFront or News Front’s social media activity to the Russian government and does not give examples of the accounts intentionally hiding their identity. The best they can do is mention some connections to the Russian government the founders of News Front have, but it is nothing they are trying to hide.

The Covid-19 pandemic has caused an increase in internet censorship. YouTube’s CEO recently said they would remove any videos that go against the World Health Organization’s guidelines for the virus. On top of the Facebook ban, SouthFront’s YouTube channel has also been removed without any explanation. Although most of SouthFront’s content is military analysis, some stories they published on Covid-19 were flagged as “disinformation” by a ministry of the European Union. SouthFront published a detailed response to those accusations, pointing out that only three of the 3,000 stories they published this year were found to be “disinformation” by what they call “pro-NATO propagandists.”

SouthFront posted a video asking their readers for support in the wake of the social media bans. For independent news outlets, reach on social media is vital for their survival. SouthFront’s Facebook page had around 100,000 subscribers, and the YouTube channel had about 170,000. SouthFront publishes multiple news stories each day, mostly following updates on wars in the Middle East. One of the website’s best resources is its frequently updated maps.

Other networks removed by Facebook in April include accounts in Iran, Georgia, Mauritania, the US, and Myanmar. Facebook claims they took down a network of accounts connected to Iran’s state broadcasting company, although they provide no evidence to support the claim. Content credited to this network includes a post promoting former presidential candidate and Texas Congressman Ron Paul from 2012. Another example from 2014 is just a news story about Israeli forces preventing Palestinians from praying in al-Aqsa Mosque.

Facebook and its Western government-backed partners will continue to remove accounts each month for engaging in CIB. It will be hard to know if the connections they make to the accounts are genuine. But if the sloppy work they did on SouthFront and News Front is any indication, claims from Facebook and the Atlantic Council’s DFRLab should always be met with skepticism.

Dave DeCamp is assistant editor at Antiwar.com and a freelance journalist based in Brooklyn NY, focusing on US foreign policy and wars. He is on Twitter at @decampdave.

Looks like they’re getting ready for the general election. As expected from the Empire of Lies.

So the collapse intensified, which is why America is now such a helpless giant. A crazy man is at the helm, yet the best Democrats can do is put up a candidate suffering from the early stages of senile dementia, who may be a rapist to boot. No one knows how things will play out from this point on.

Boycott Facebook. If you have family or friends with accounts there, just inform them that you will no longer be signing in due to Facebook’s censorship campaign. They can contact you via phone or e-mail. We really do not need that mindless site in our lives anyway.

I’been doing it since 2015, i knew along time ago their intentions.

I agree with you, yeah act of boycott is the right way but still Southfront contains links to fakebook and in this article the word fakebook is hyperlinked: all free $ for fuckerberg

Why would anyone tell a burglar when they are going on holiday, or tell the government anything at all! ABC, Always Be Covered.

Sue them in California for willful and blatant discrimination based on national origin. Facebook can’t simply ‘terms of service’ away the US Federal Civil Rights Act. Consider this: if the same feeble justification Facebook used against SouthFront were, instead, used to ban someone based on their sexual preference or skin color, they would fold like a cheap suit. Their lawyers would look like bumbling fools in court trying to explain how you were really not being targeted based on national origin. They will attempt to justify bans based on what they perceive as your Pro-Russian, anti-narrative bias, but they would never attempt to ban an account based on race, religion or sexual orientation. No business in California gets to cherry-pick which specific provisions of federal civil rights law they will chose to ignore. Doing so goes against the very definition of civil rights.

Account holders with opinions FaceBook approves of do not inherently have more civil rights than accounts FaceBook disapproves of. Same goes for any other service (Twitter, etc.) offered to the public. It’s just that nobody has challenged these cowards in court yet. FaceBook has deep pockets – you’ll find plenty of hungry civil rights attorneys in the US willing to help you take a piece out of veiled racists and selective xenophobic FaceBook management.

The specific US federal laws apply to ‘places of public accomodations’, but even California would have to admit that FaceBook’s services (despite any anti-civil-rights TOS) is covered.

The [US] Federal Civil Rights Act mandates “full and equal enjoyment of the goods, services, facilities, privileges, advantages, and accommodations of any place of public accommodation, without discrimination or segregation on the ground of race, color, religion, or national origin.”

Restaurants and stores qualify as “public accommodations” even if they’re a private business. As such, discrimination laws apply just as much on private property and to private businesses as they do in any public place.

Whether you post a sign or not, businesses never have the right to refuse or turn away customers because of their race, gender, age, nationality or religion. In addition to the Civil Rights Act of 1964, several states have their own civil rights legislation designed to prevent discrimination.

The name of the organization, Atlantic Council, tells you all you need to know.

They banned unz as well. Time to leave the nest!

The Jew cunts at Fuckbook are having a hard time controlling the global seepage of TRUTH and OBJECTIVE news. Once collapse sets in, it’s impossible to stop.

Before wars begin the truth of history is always lost. It is the responsibility of us all to examine where history leads. No one has a monopoly on the truth or automatic justification for censorship. We continue to repeat history by denying it. https://www.ghostsofhistory.wordpress.com/