Trump’s anti-interventionist base, in this case, Alex Jones, reacts badly to Syria intervention: “Is no one pure in this world?…. F**k Trump!” pic.twitter.com/lBPVctVS1G

Loved AJ’s rant. Usually he’s annoying especially during interviews but this was nice to hear.

I would love to join you in that applause….please bear with me.

I totally agree with the sentiment, but if you notice he didn’t mention Trump, Bolton or the other nut cases, he aimed his vengeance at Mattis. Now, I am not an American, but I thought Mattis was the only one asking for caution and to await the UN’s experts – finding out the truth regards the fake chemical attack attacks that didn’t happen ?!!.

Anyway, enough of that BS, a damn good AJ rant and remember his viewership is huge in the US and globally I suppose …..at least it will get a few people thinking.

PS Sorry to be a pain.

No need to apologize. The way I see it, AJ lost his cool and when emotions run high, it’s difficult to think straight. I’m no AJ fan, as there are plenty of other things I don’t like about him, but this rant was good.

You can call me Al
Reply to  Alpha&Omega

Apologies if I missed it.

I feel there is a serious backlash coming.

outsider
Reply to  You can call me Al

Jones did say “f#ck Trump” at the close of his rant. Unfortunate he didn’t rant against Bolton.

You can call me Al
Reply to  outsider

Apologies if I missed it.

outsider
Reply to  You can call me Al

Kell McBanned
Reply to  You can call me Al

Big mad Alex raves about Bolton and all the other Jewish Terrorist Extremists in the administration in the 2 hr stream but they are known quantities, hes pissed off at Trump and to a lesser degree Matis because he thought they were different, he had faith in them and feels betrayed

You can call me Al
Reply to  Kell McBanned

So did I, well Trump anyway.

neil barron
Reply to  You can call me Al

Close on your assessment but Bolton wanted a go and Pompeu also. What the hell is matter with waiting ? OWPC was there it would find no gas attack? Jaish al Islam would be exposed for what they are terrorist. They where disappointed with Trump they and others have already put out statements expressing that he was going to take out everyone.
FOOLS.

Agree totally. For me, it is both embarrassing and humiliating to watch.

DaWolf
Reply to  You can call me Al

He said Fuck Trump. And if you had watched the live that started 5 minutes after this recording ended (which I did) you would have heard his serious critique of Trump and his opinion that now after the raid of Cohen’s premises Trump has been completely broken and under full control of the deep state.

You can call me Al
Reply to  DaWolf

Thanks, I must admit I missed it.

I don’t trust that man anymore….he’s talkin’ with the changing of the winds..either you speak with straight or with crooked tongue…

Love the first fucking video Jones is fucking poetic in that with his fucking language about the fucking liberals and the fucking Neocons, Fucking going fucking righteous and showing his Fucking anger towards the fucking Idiots running this show!!

Although I don’t follow Alex Jones in any way at all, I have none the less
always thought his heart is in the right place. So well done Mr
Jones. I also would not dismiss his influence. I am not one to
underestimate the msm as I believe they still control what people
believe, but Alex Jones is part of a significant counter narrative.

That son of a bitch is only crying because so many of the Tommy Hawks missed. He is a fucking shill.

lol.. does anyone wanna fuck that bitch Nikki Hell….?

Q is saying opposite of alex

Q is a Trump psyop. Q is mega BS designed to distract.

Trump is entirely culpable and AJ is mis-directing his anger. From what we can tell MATTIS is the ONLY reasonable/cool head in Wash’DC.
Trump has lost it. He already demonstrated last year that he is willing to kill countless civilians if it will give him a temp bump in his poll numbers.
Trump’s word is valueless and his promise is worth shit. It doesn’t matter what he promised during the election, he will ditch any and all promise if there is the smallest, short term pay off for him. Just look at the TTP. That was the central economic election promise and he’s given that up.
AJ is a fool of he thinks Trump has been misled. Look at who Trump has hired; Pompeo and Bolton!! Trump knows exactly what he is doing. Trump will be the first up against the wall come the revolt, right next to McCain, Wall St and the Cable News Networks.

No doubts that Trump now owns the Syrian mess. Obama and Clinton is off the hook. Mattis and Kelly are the only sane people left. Watch for clashes between Bolton and the two Generals. AJ’s anger may be misdirected, but it’s difficult to think straight when under emotional stress.

Not to talk about evil personified, the witch Nikki Haley. That zio stooge was one of his first and worst appointments.

Now say the Israel word, the word you cut all your guests off when their dare to speak it, then I will have real respect for you Mr Jones.

See in the comment sections of the stream, every second persons calling out the jews lol

Trump your now “the butt boy of Al Qaeda” classic. Keep it up Jones and I’ll buy some Brain Force.

I like what he said. And like him I voted for the Donald. I like his domestic policies, but I am hating his foreign policies. He should have bombed atheist-Israel instead, our worse enemy we have ever had.
It is time to impeach any and every politicians who ever supports the UK or France or Israel.
https://www.youtube.com/watch?v=aihXiSD6O8A&t=1s

Trump Humiliated and he is looking for a way to save face. Where are the
Satalite recorded videos like you did for Iraq? Haha not a single one
of them? Why is that? There is something seriously wrong here. On the
other hand, the Syria regime produced a video showing how they shot down
your Missiles. Trump is finished. He cannot even produce a single
Satellite recorded video of any Missile hitting the target like he did
for Iraq. Only fools and horse will buy his false success stories. We
supported him not to go to war as he was saying no more wars and he will
build a better border but now we will bring him down forever. Trump says Assad is very bad and evil but George W bush killed 130,000 Iraqi civilians and he is considered as a hero in the USA.

Just on the footage you speak of re gulf war most of that came from aircraft guiding laser guided bombs to targets, high res sat footage is rarely if ever declassified as agencies want to hide their resolution capabilities.

I like the way you think, when I get upset, I curse the way You do.
Keep strong Big Boy. 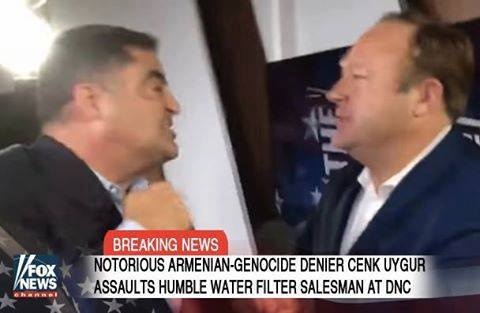 both work for the zionists, so that photo is staged. They probably both go to the Bohemian Grove together to watch the cremation of care.

Alex is the one who broke into Bohemian Grove and filmed it exposing it to the world, the pic is a meme, a joke.

Trumps betrayal of his support seems to me , BlackMail.

Jonestown is trying to keep everyone drinking the kool-aid. Alex Jones is a zionist agent, blaming Muslims for 9/11.

“Mother-fuckin’ Rissians???” I can’t tell for sure, but it looks like theater to me.

He surely has received lots of $$$ from Trump campaign.

stop trump and his bloody bandits !

No it’s not about the creepy Trump it’s about the deep state getting to him.
Now that was me yesterday afternoon then last evening when he made the announcement of the strike you couldn’t tell the difference between me and Alex good thing I don’t have a wife and don’t watch TV.
One difference I don’t set down I’m more athletically inclined all over the wall and ceiling.