On Tuesday afternoon, “it was reported that an F-35B made contact with a KC-130J during an air-to-air refueling evolution, resulting in the crash of the F-35B. The pilot of the F-35B ejected successfully and is currently being treated,” read a statement from Marine Corps spokesman Capt. Joseph Butterfield to USNI News.

“The KC-130J is on deck in the vicinity of Thermal Airport. All crew members of the KC-130J have been reported safe,” Butterfield said. Local TV station KESQ News Channel 3’s Jake Ingrassia was near the Jacqueline Cochran Regional Airport in Therma, California, at the time of the incident, capturing photos and videos of the accident scenes.

Ingrassia tweeted a video of the F-35B crash site, interviewing an eyewitness who said the incident felt like a “three or four earthquake.”

UPDATE: Military officials confirm a fighter crashed near Salton City during air-to-air refueling, causing another military aircraft to make an emergency landing in Thermal. @JakeKESQ will have the latest tonight at 10 and 11 p.m.

KESQ released a video with Ingrassia describing the crash and showing video and images of both crash sites.

“The official cause of the crash is currently under investigation,” a military spokesperson told FOX News. “Updates will be provided as information becomes available.”

Over the years, the F-35 has been involved in a series of crashes; the latest was in May when an F-35A crashed in Florida during a training mission.

It’s just that the Fuckup-35 is so stealth its pilots can’t even see the control wheels to avoid collisions with a huge tanker. That technological magnificence what a $1.5 trillion project can buy you; as the Pentagon’s Ziocorporate terrorist contractors laugh their asses off on the Cayman islands mind you.

So? It’s not even in service, and this is about the F35 not anything else.

Indeed it’s not even in service and crashes, F-35 are in service with hundreds. And it didn’t crash because of a technical error but human error.

All of them crashed due to technical error.
Three sofar.
Hundreds of useless junks, nothing to be proud of.

Please Mr Loner, let me be proud just for a bit

Like I said they used this one later on to culminate towards safety eject protocol,
are you that dumb or do you expect,I mean pilots who broke their necks on f35s!

Still better trackrecord than the Craptor and the Floppy.

Ahh they used the plane to test the ejection ROFL

This is the prove it’s invisible

Exactly my words. The F-35b STEALTH is so invisible that the fuel tanker couldnt see it.

Another Full Operational F-35 down….

10 maybe even more,not to mention the other ones that failed to take off after turbine kebooms!

One of the pix shows cuts in the fields used for irrigation.
So the pilot did not want to deploy landing gear?

The ditches on the photo is made by the airplane’s wheels. The pilot tried and tried but couldnt stand the mud.

Two engines out on one side make the C-130 a ballistic missile with marginally-functional wings. Kind of like a concrete glider or a giant lead-filled aluminum frisbee. It’s no longer flying at that point – it’s just moving forward (but slowing) and moving in the general direction of the ground (faster and faster). If the pilots are lucky, they get to choose which way the nose is pointed when the fun ends.

Obviously a sabotage. And good one.

Note that the US pilot returned safely home without a single scratch on his hair after hitting all targets with a precision strike.

C-130: Loss of a single engine was a major emergency, loss of two engines meant (at least older models) the Herc could not keep itself airborne, loss of two engines on same side especially bad. Props to jarhead pilots for landing that thing at ALL, much less upright, level and probably no hydraulics. F-35 guy lucky/skilled, too. If someone told me this happened and no fatalities, I wouldn’t believe them.

Starboard engines’ props and lower cowling might have been damaged on landing, but my wild-assed guess is that they tried to occupy the same space as the Marine F-35 as it was flying through them. Note in pics that inboard starboard aux tank is missing. I don’t think it’s droppable, so… Port outboard aux. tank gone, but mounting pylon too? Could have been dropped. I think that’s a plumbing leak. Dump mast further out, if I recall.

No idea what happened, but all the action was on the starboard side. 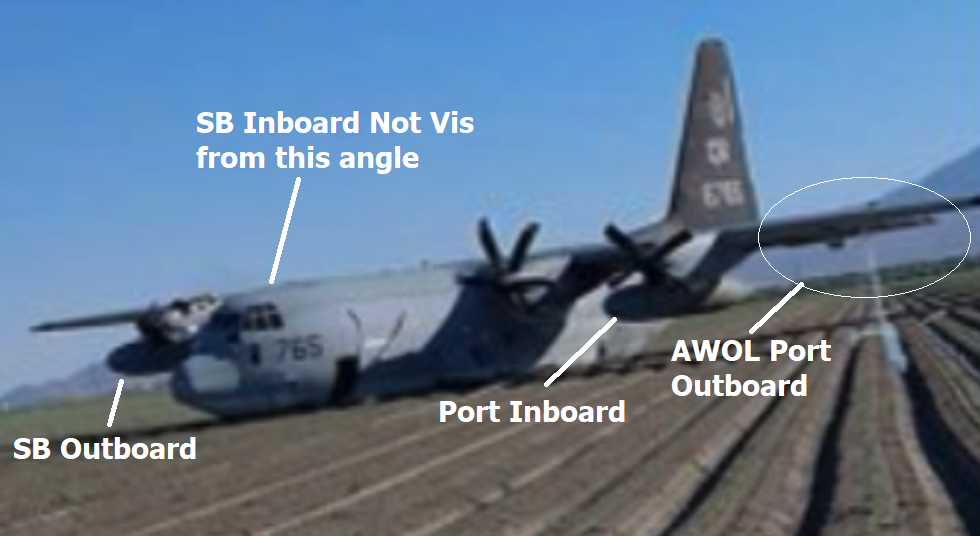 The refueling drogues are pretty long on KC130, may have been a mismatch in speed.
Does the belly landing waste the airframe, or maybe still usable? Also retrieval seems to be a problem if still flyable.

Marines F-35B missions (I would think) require long fuel-sucknig loiter times and are pretty refueling-intensive. 30% less fuel capacity than the AF F35As and shorter . I always thought those guys got screwed to accept an aircraft far less optimal for CAS than they wFed.Might be a good call retrospect when penetrating heavy EW defended area for a quick F-35 face-stomp and dash on critical targets. Nice, but nowhere near the awesomness of a slow, vulnerable A-10 spitting out streams of DU death. That just seem more ‘marine’ to me.

It, would probably be cheaper for taxpayers if the Marines bought the land, burned the wreckage in place and buried it under 50′ of clay. Instead, someone’s brother-in-law will get an overpriced, no-bid contract to strip it, cut it up and haul it away to Mexico for scrap. That’s after someone else’s brother-in-law gets the HAZMAT contract to drain the rest of the fuel and suck the JP-8 out of the top 100′ of that sandy soil.

But it’s been a week. An extended mexicali family now calls the fuselage ‘home’ and have already sold a hundred thousand in aluminum scrap from the wings. They will have ground down and polished the aluminum and titanium skin to produce the equivalent of a couple of 33′ Airsream Classics with advanced avionics. 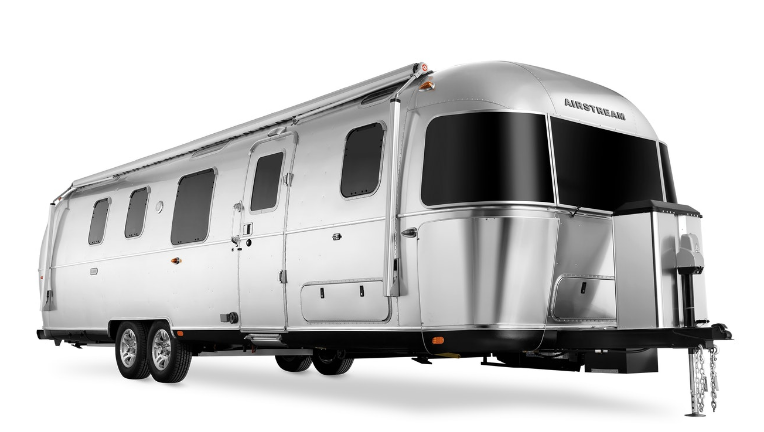 They’re not mere ‘Agricultural workers’! They’re aspiring permanent U.S. residents. Dreamers! How dare the Marines do an assault landing on their bean field, dump JP-8 everywhere and steal their future!

But if the migrant workers have family members 18 – 35 who are legal, permanent residents of the U.S., the Marines would like to remind them of our naturalization via military service. That, technically, wouldn’t be stealing their future. It would just be exchanging a few years of it for the possibility of U.S. citizenship. Who wouldn’t take THAT deal? Jens, how about you?

I wonder where they went, the air crew on the 130, after they got back to base. they sent me to the e-club for a few drinks. :P Then we everntually we went over to sick bay to get looked at. But, that was the 80´s. :P

Amazing skills to bring that huge tanker down safely on its belly,too bad f35s not up to standards=scam: