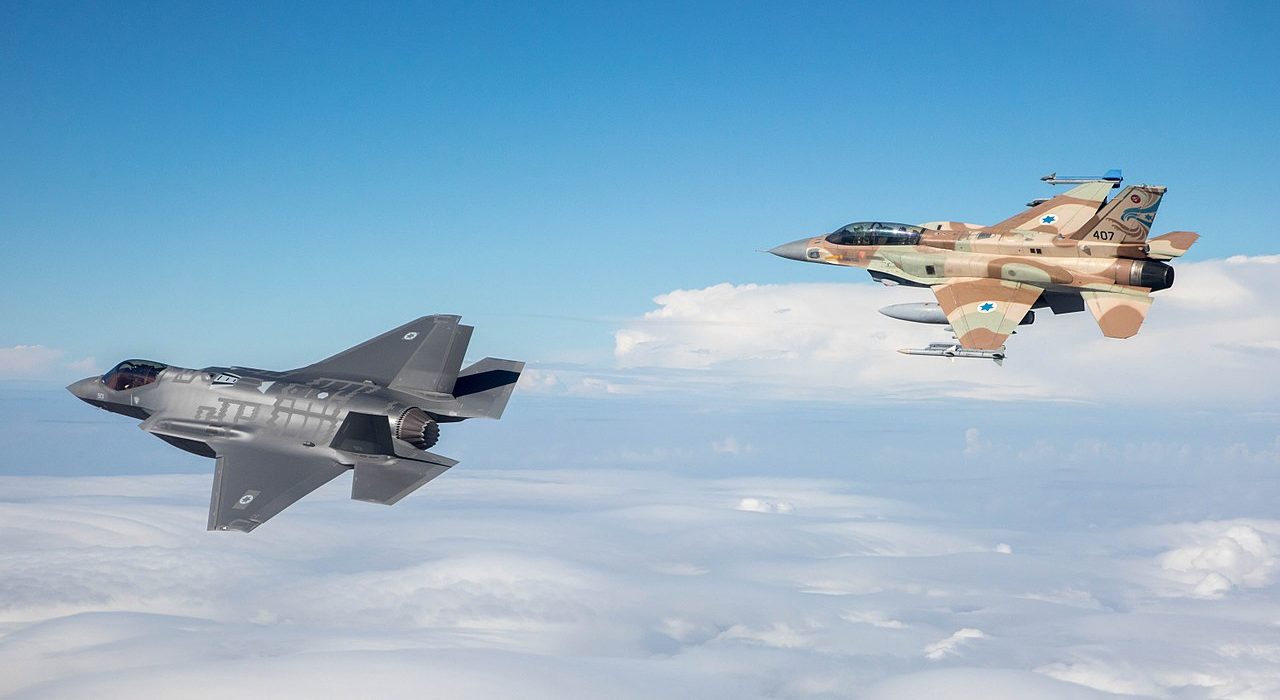 An F-35i Adir warplane of the Israeli Air Force (IAF) destroyed a Chinese JY-27 radar of the Syrian Arab Air Defense Forces (SyAADF) during the Israeli attack on Syria in January 20, Defense Blog reported on February 21 citing an Israeli source.

The January 20 attack was supposedly a response to a rocket, which was launched from Syria at the Israeli-occupied Golan Heights. During the attack, IAF warplanes hit many targets in Damascus, Daraa and al-Suwayda.

A month ago, Israel’s ImageSat International released satellite images, which allegedly show an impact of the January 20 Israeli strikes on Syrian and alleged Iranian military targets. One of the photos showed a destroyed JY-27 radar near the Damascus International Airport. However, there is no evidence that the radar was destroyed by an F-35I. 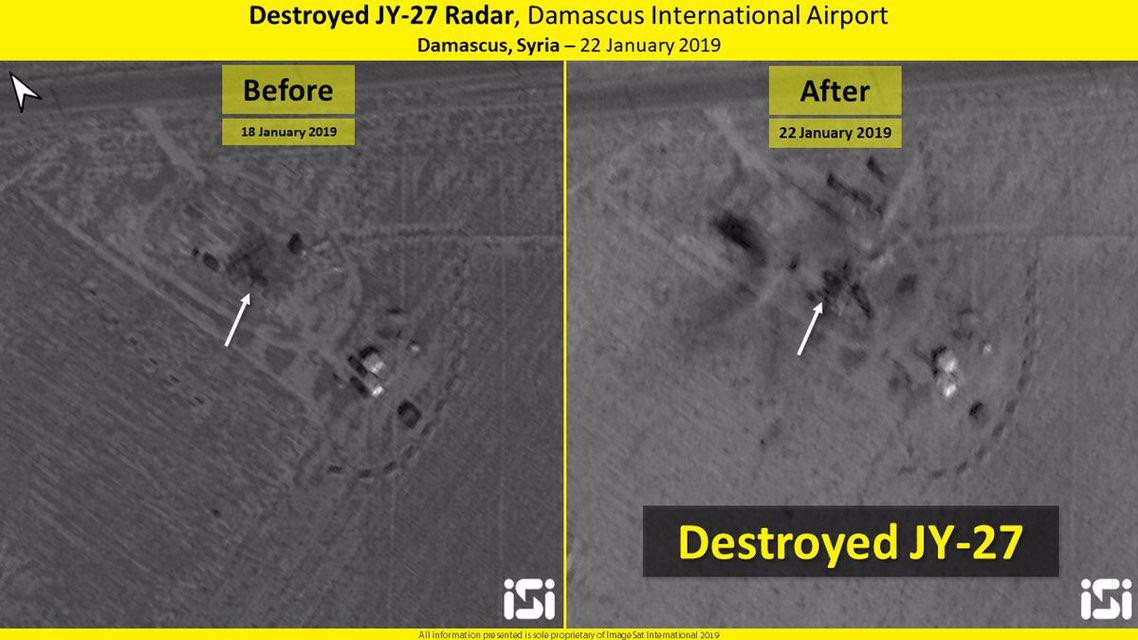 The JY-27, which has a range of 390km, was designed and developed to provide early warning information and detect low-observable air targets. It is also capable of providing information for weapons system. The SyAADF operates many radars of this type throughout Syria.

In mid-2018 IAF commander Maj. Gen. Amikam Norkin claimed that the F-35I has participated in strikes on Syria. But again, no evidence was presented to support these claims.

Yeah, and I am Elvis Presley coming back from the moon. ” During the attack, IAF warplanes hit many targets in Damascus, Daraa and al-Suwayda.” Oh, yes that was a devastating attack but somehow Syrians could not even notice it. Also it looks like new version of photoshop allows for faster editing :)

On the serious note, it seems that Bibi’s electoral campaign is in full swing now.

and all the while israel’s depalestination goes on and on and on!!!!!

shlomo, stay down. who the eff opened the manhole.

tudor miron came back from sirius

I am waiting for further proof that this was actually an “attack” by an israeli F35, for the simple fact that these aircraft are flying lemons….

I therefore see this as nothing but pure propaganda to once again make the slithering snakes in IsraHell look “good”..

Since when well wishing it is a matter of fact? This khazars are so much gone that beginning to believe their own lies.

Israel is only good at killing Palestinians and some times Russians

since 9-11 they did much better with americans.

since USS Liberty you mean ..

Well Russian are best at killing its own people.

Real question is – what was ordnance – was it stand off missile or glide bomb released from within Lebanese airspace, because that is general pattern of IAF operation against Damascus, a city relatively close to Lebanese border. If so, the vaunted F-35 stealth characteristics are irrelevant to exercise as was hiding inside third party airspace, not evading radar in Syria.

i’ve also heard a rumor saying that the attack has been performed with photoshopping ordnance only, but idk why it doesn’t get on sf.

It’s not unusual if the F-35 did this for it is made for such operations. However because of the many doubts to its abilities confirmed proof would be nice.

Syria has had two JY-27s for at least a decade. Neither one was sited anywhere near Damascus Airport, and there is a good reason for that: you don’t put a long-range early-warning VHF radar (equiv. to NEBO) in the shadow of the mountains where it can’t see a damn thing.

One JY-27 was near Palmyra, and the other was well northeast of Damascus, east of Sayqal Air Base. I kind of doubt either one was still operational – they would have been targeted a long time ago. They were used with Syria’s old Chinese mid-range SAM systems and probably can’t talk to any of the Soviet/Russian stuff.

All that is enough for plenty of skepticism about the claim. Now add in some crappy ISI fuzzball imagery and proof and the involvement of the F-35I [chuckle…], and any remaining doubt is removed about this story being amateurish and rather desperate Israeli propaganda. I’ll be waiting for the day we see the picture of kids jumping on the wing of a downed Israeli F-35 all over the news. Another birdstrike!

It might have happened, and it might not of happened. Better chance to get blood from a stone than the truth from Israel.

So then why is the Israeli Air Force (IAF) still using Lebanese air space and hiding behind commercial services?

Jews have historically controlled from the shadows of charlatans.

Surely?..I think israel dont risk a F-35 to fly inside Syria..among other reasons they can launch long range cruise missile away from Syria air space….of course Pantsir intercept many of them…but like Homemade palestine rockets some of them can hit the target!.l..

I think the Israeli’s are possibly going to perform a manned Moon landing using a F-35I too.

Hi there,, I believe that if Israel will continue this behaviour eventually will result in Syria and Iran combine will attack Israel And there is nothing what US will do.. looking at Syria and Iran’s military capabilities will be able to decimated some parts of Israel…. over 80%, of Israel is not for a war whit Iran….this will be a suicide if a war Israel vs Iran will ever happen Israel will stand small chances of winning. Why?? Well … have you ever thought how bad Israel has done in middle east??? In middle east are from 10 -to 100 million people hate Israel. In middle east millions of people will take arms and fight against Israel for free. I hope only peace in the world but if Israel doesn’t calm the fuck down …will be ww3 … and nobody is the winner

Why is the IAF so scared of Hezbollah? Care for a ground invasion of Lebanon, again???

In the year 2006, 75,000 IDF troops and two armored battalions were effectively stopped and routed by 4500 Hezbollah ‘ Regulars’ , since Hezbollah had its Special Forces and Commandos stationed north of the Litani River line, and they saw no action.

Israel’s pathetic army attacked with 400 Merkava’s MBT’s of which 44 were totally destroyed. Since that debacle, the embarrassed Israel ceased production of the ‘ Chariot of God- Merkava MBT’.

Hezbollah also put Israels naval flagship out of commission and has been written off as non-fixable, almost sinking it. All with a cheap Chinese C-108 Anti-ship missile.

And the saddest part of all is that Israel enjoyed total air superiority, yet they were not even able to seize and hold small Lebanese border villages.

The IDF was no match for the highly mobile, highly dedicated Hezbollah fighters, who outmaneuvered , outsmarted, outflanked and outmatched the IDF at every turn. Even Israel’s highly decorated and celebrated Golani Brigades nearly got themselves encircled and annihilated, if it wasn’t for the IDF and IAF allocating many resources to extradite them from impending doom.

So Israel realized that they were getting their collective asses handed to them, and went about doing what they do best, bombing densely populated civilian cities. By the 33rd day of the embarrassing , humiliating defeat at the hands of a very serious foe, Hezbollah, the Israeli government was pleading for the U.S. , British, French to intervene at the U.N. and call for a cease-fire.

The next , upcoming showdown will see Israel effectively overrun , as the IDF are rather pathetic and are mostly exchange students from the U.S., Russian Jews on the run from justice in Russia, and LGBQT’s who are no match against the forces aligned against them. Forces who by now have 9 years or real-time, actual combat experience in urban, rural and desert environs.

As long as there are nukes to keep the baby rapers from using theirs. The IDF can be routed, if they even choose to fight, in the occupied territories without risking US intervention. Once that’s done, the liberating force can stick around to police the implementation of all of the resolutions that the baby rapers have been violating for the last 75 years. So that a referendum can be held to vote Israel out of existence.

Too many people believe Israel is next to omnipotent compared to most of its neighbors, but the 2014 war should have been an eye opener for everyone. As you pointed out Hezbollah forces alone were able to give them a good run for their money, now Israel must be totally fearful of what the combined Shia Crescent is truly capable of, especially if they were all using the newest Iranian missile capabilities to attack Israel in a coordinated strike. All the Iron dome and David’s sling systems combined couldn’t cope with the tens of thousands of missiles, rockets, and drones that would all strike Israel at one time from 4 different countries, total annihilation would be what Israel could expect if it really provoked a war against any members of the Shia Crescent. I especially like your comment about the IDF makeup, “as the IDF are rather pathetic and are mostly exchange students from the U.S., Russian Jews on the run from justice in Russia, and LGBQT’s who are no match against the forces aligned against them”. So true.

This chinese radar is supposed to have a range of 300 km, detect stealth aircraft, and be highly resistant to jamming. IAF proved this all to be the biggest joke ever. IAF came undetected by this radar, jammed it completely with electronic warfare, and destroyed it :)

The “best” technology on the planet is no match for Israel :) God’s chosen people for a reason.

syria, russia, china have no chance against stealth technology of west

The massive and deadly farts from Western “leaders” constitute a new class of wmds. Do you remember their “Assad must go” farts? Standby for E.L.E!!!

What proves this isnt some drone attack or some cruise missile?

We do know for a fact that strikes like this do occur, but no one is presenting anything to say that this one was caused by Israel. Clearly, something was destroyed, but that very well could have been the product of infighting or an accident. And who says it wasn’t an American F-22 for that matter? But regardless who, there remains the question of why?

The fact that the usual Hasbara suspects are pushing the claim indicates that it’s completely false.