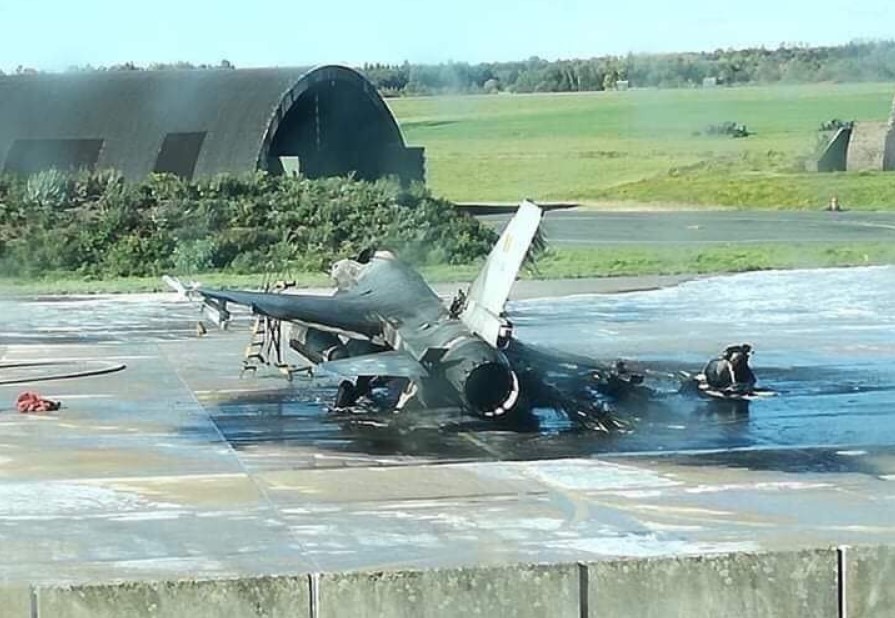 On October 11th, an F-16A fighter jet was destroyed and one F-16A received minor damage, after a technician accidentally opened fire from another plane during ground maintenance in Belgium’s Florennes Air Base.

Two people receive minor injuries and were treated on site. They mostly sustained hearing injuries due to the explosion’s shock wave.

The destroyed fighter jet was grounded near a hangar when it was accidentally fired upon by another F-16A which was undergoing routine ground maintenance. As reported by F-16.net, several explosions were heard, and thick black smokes could be seen from a distance.

Civilian firefighters were deployed to the scene as well as an ambulance.

The Belgian The Aviation Safety Directorate (ASD) is currently investigating the exact cause.

The Florennes Air base houses the 2nd Tactical Wing which comprises the 1st ‘Stingers’ Squadron and the 350th ‘Ambiorix’ Squadron. It contained about 20 F-16s.

There was another recent incident with an F-16A,  when on June 4th a Taiwanese pilot was killed as his jet crashed in the mountains at the start of Taiwan’s annual live drills.

The defense ministry, local police and fire department conducted land and air searches for the 31-year-old pilot, Major Wu Yen-ting, for hours before discovering the wreckage of the plane.

2 injured, F-16 destroyed in an explosion during a ground maintenance at the Florennes military base in Florennes, Belgium pic.twitter.com/kaE2WSPXT8

Wu was also involved in a previous F-16 accident in Taiwan, in 2013, when he parachuted to safety following a suspected mechanical failure with jet #93-0723.

Wu graduated from the Air Force Academy in 2009, and had amassed a total flight time of 1,039 hours, including 736 hours with the F-16 jet, the Ministry of Defense said in a statement. Thus, it is unlikely that he made a mistake that cost him his life.

It wouldn’t be strange if an issue with the F-16A was the cause both in the case with the accidental fire during maintenance, as well as with the plane crashes of the Taiwanese pilot.

There was another, even older incident with Belgian F-16A’s when in August 2012 a pilot departed for a training flight from Kleine Brogel AFB and during his return the jet caught fire and the pilot had to parachute into trees. The pilot, Jean Francois Van Cranem had over 500 flight hours, out of which 132 were on the F-16.

It is possible that all of these cases are due to incompetence, but they could also be due to faulty hardware.

There is also a somewhat recent mistake in the European Air Force due to incompetence, when on August 7th, 2018, a Spanish pilot accidentally shot an air-to-air missile from his Eurofighter Typhoon while on patrol above Estonia. The missile landed some 40 miles away from the Russian border and could have led to a more serious issue, luckily it didn’t.

On October 2nd it was reported that the Spanish pilot received the minimum penalty in the form of a fine in the amount of one week’s pay or 14 days of arrest. The Spanish Air Force concluded that the pilot shot the missile due to negligence, however there were unspecified “mitigating factors.”

Learning by f*cking up: Dont remove the ground safety switch

It appears that the first lessons given to anyone handling a weapon issued to him/her were ignored :)

Great news,maybe there is a slow motion Coup taking place as the goyim wake up to their slave status under satanic Zionism.

I Wonder Who Manufactures ..F-16..Could Be America ?

occupybacon
Reply to  MADE MAKER

America is to blame…

oops.. lol. Wonder if it was an accident, or a mulsim attack and this is the cover story. belgium is kinda overrun.

The British Government has been speaking to the Belgian ‘military intelligence’ and there is ‘highly likely ‘ evidence from GCHQ and MI6 that ‘Russia is responsible’ for this outrage.

A Russian GRU agent smeared some LSD onto the cockpit ‘access knob’ and the highly trained aircraft technician had a bad ‘trip’ thinking he was a fighter ace having a Dog Fight.

The BBC have verified this claim from anonymous sources within the British MOD.

Pay attention to the info you release. There could be folks around looking for GRU agents to beg them to smear their knobs too.

I forgot to consider the large number of ‘exceptional ‘ UK citizens whose brains are between their legs and a stimulant rubbed gently onto their knobs would of course increase their cognitive abilities.

Especially when interacting with other knobs in parliament.

this made me laugh, but i must state that there was no naughty intent in my previous post.

We tried.
Reply to  FlorianGeyer

Nah, the technician was trained by John McCain.

The question is who pulled the trigger and why. The other truth is in west good help is very rare now days with all the zombies they have created.

What do you want, if you’re whole life as an Air Force pilot never gives you the chance to have a real shooting, … ? The temptation grows every day and some training ammunition cannot harm that bad as in war conditions. So why not try it? LOL.

the one who pulled the trigger was not a pilot.

With Belgium, I go with a guy called Mohammed.

Yerrrh. Probatly some, which one ate a dade from Syria.

Why was the plane armed, if in maintenance?

how else will be able to shot the enemy if it was not. Americans never stop fighting for freedom and saving the world even when in maintenance. Dont you know before you kill the `bad` guys you first clean house?

The bad guys are amongst us, … The world would be better of without those fucking Anglo-Zionists. The rest is propaganda!

depends of how you mean the bad guys. I have not say one word but it is quite clear how I used it, within the context of what I said.

You can call me Al
Reply to  Django

Excellent ! We have to get rid of all those weapons. It is time to spend money for constructive projects and stop thowing it away to get more stupid weapons.

It’s better to have a weapon and never need it than need it and not having it.

It is an answer of somme-one having a lot to loose. I will add that nowdays when we are told about the emergency about climat changes, lack of water etc…, the ecologist blabla; how can we listen to them when others are spending trillions of $US to make tools ( nuclear, bio, etc..) to destroy the whole world ? “Si vis pacem, para bellum” is a lie invented by the military people to steal the common people.

You are confusing spending money on military and spending EXCESSIVE AMOUNTS on military. Being a NATO member comes at a cost. At the same time NATO is a terrorist organisation which demands 2% GDP military spending. Given that Scandinavian states are ruled by US-owned stooges (the anti-Russian sentiment in the media there is not far off the idiocy of US and UK) this will continue.

Yet what ethno-religion do they appeal to the most? Hint: Not Anglo-saxons and not Christianity; it is the religion of banking families such as the Rothschilds and the Warburgs, etc.

To be precise, the North Atlantic Terrorist Organization is an aggressive military pact in war toward other members of the United Nations and an extortion racket in peacetime toward its own members.

You can call me Al
Reply to  Jean de Peyrelongue

I would love to agree with you, but you do realise that we are talking about the US military stuff.

US military stuff is JUNK and impoverishing the rednecks.

That is exactly what I inferred. Overpriced Junk at that.

haha Belgians are some of the most stupid people in Europe and a fake state so this is expected. They should stick to chocolates and waffles :) and argue about which language to speak…..

Might the ignorant technician have been an enriching recent immigrant?

more going on then that….belgium is even doing a nationwide sweep for football crimes??no very fluid out there maybe they r sweeping the bad guys FINALLY..or the good AGAIN!!best hope it ain’t the good

Just sitting there with ammo loaded? Somebody is going to do the rug dance.

Technician will claim he was possessed by the spirit of John McCain.

occupybacon
Reply to  We tried.

You can call me Al
Reply to  We tried.

We tried.
Reply to  You can call me Al

Do not make me laugh, … This must be Belgium: “What we do ourselves, we do (usually) better!”

That’s why the UK bought the F35B.

I’m sure every country has a region, or another country that is the target of derogatory jokes, where the people are deeply stupid. To the Netherlands Belgium is that country. And from time to time the Belgians confirm that bias. Like they did now.

As for this incident, never attribute to malice which can easily be explained by human incompetence. There is after all a never ending supply of it.