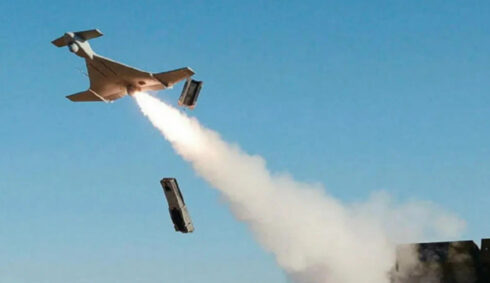 After the massive missile attack in Ukraine on December 29, Russian forces continued strikes in the war-torn country. At night on December 30, air alert sounded in the Kiev region. Russian Garenium-2 kamikaze UAVs targeted the capital of Ukraine.

The mayor of Kiev, Vitali Klitschko, claimed that seven kamikaze drones were intercepted by air defense forces. According to him, two UAVs were shot down while approaching the Ukrainian capital, five others were intercepted over Kiev.

According to the mayor, the wreckage of a UAV fell in the Goloseevsky district near a residential building. At the same time, local sources reported that a UAV damaged an administration building.

Kiev authorities do not reveal the real losses, including after Russian UAV and missile attacks. Thus, the result of the strikes are hard to be established.

At noon on December 30, Russian forces continued strikes throughout Ukraine. Explosions weer already reported in Nikolaev and the Nikolaev area, in the area of Artemovsk (Bakhmut) and Konstantinovka. Air alert sounded in most regions of Ukraine, in the eastern and in the central parts of the country.

Russia has plenty of missiles left.

The Gauleiter of Kiev, Vitali Klitschko, claimed that seven out of five kamikaze drones were intercepted by the Nazi air defense.

More important is to realize, who really is in control. And moreover why nobody is adressing the real problem, which is the highjacking of nearly every country and government by the hook-nosed satanists and their collaborateurs. They actually openly admit it, felling untouchable. And because of our negliance and stupidity they become stronger and stronger !

For example see what WEF satanist globalist leader Klaus Schwab stated and what he admitted, who is all part of his organisation:

The World Economic Forum regularly selects so-called Young Global Leaders. Once selected, they are reviewed by Heidrick & Struggles, a leading provider of leadership consulting and talent solutions. They are then evaluated by a selection committee.

Each year, about 150 are selected, of which about 125 actually become Young Global Leaders and go to Davos and other meetings.

Jack Ma, founder of Alibaba Group, said he has benefited from being a Young Global Leader. “Back then, I listened to Bill Gates, Bill Clinton and George Soros. There weren’t that many people back then.”

Jonathan Soros, George Soros’ son, was also a Young Global Leader, as was Mabel van Oranje. “We can talk openly about taboos, we can tell politicians how things really are, which will be harder in ten years – when we’re all running countries, big companies or whatever,” Mabel said.

Carlos Alvarado Quesada, president of Costa Rica until a few weeks ago, was a Young Global Leader. In conversation with Klaus Schwab, he said he wanted to add value. Klaus then pointed out that former German Chancellor Merkel, former British Prime Minister Tony Blair and even President Putin were all Young Global Leaders.

Crystia Freeland , the FM for Canada and deputy PM, also was a young WEF leader; she now sits on the WEF board of directors.

The Argonaut
Reply to  drew cuurah

You can take people like Freeland out of nazi Ukraine but you can never take the Ukrainian nazi out of them.

Her grandfather was a Ukrainian Nazi propagandist. They hid him on a farm outside Edmonton for some time after he was smuggled into Canada from Europe. He was was wanted by the Poles until the eighties or so for operating a Nazi propaganda newspaper in Krakow during the War. If you want to see what a poisonous effect the Ukretards have had in Canada, just read this account of the whitewash of Freeland’s shit-pile grandfather: https://www.theprogressreport.ca/blank_spot_why_chrystia_freeland_s_refusal_to_acknowledge_her_grandfather_s_nazi_past_matters_in_2020

The family immigrated to Canada and set themselves up, all financed with wealth obtained from robbing the murdered of their gold teeth and jewelry.

She was an agitating operative for the Canadian government, keeping connections alive between Ukrainian and Canadian Banderites. She used the cover of a student of the Russian language and when the USSR had enough, she was refused re-entry. Her mother was an operative funded by George Soros, running an NGO for him in post-Soviet Ukraine.

“They hid him on a farm outside Edmonton”

No doubt they hid him in the pig pen so no one would notice.

He even claimed they shot down all the missiles Russia will launch tomorrow.

The mini-Fuhrer can light some candles and beg his American and European friends to make more sacrifices for the American Reich.

Ukraine is getting its electric systems degraded. This is the price to pay for promoting the NAZI ideology in Ukraine. Ukraine has been preventing native Russians in Ukraine from speaking their language and practicing their culture. Ukraine has killed 14,000 Native Russian civilians in Ukraine from 2014 up to 2022. Ukraine is paying the price for its mini genocide on Russians. No one will save Ukraine. Any one who sends soldiers to die for Ukraine is getting humiliated. Viva Russia, the world doesn’t need any group that promotes NAZI ideology.

They say there are at least ten thousand sheep dipped Polish arseholes willing to die in Ukraine for the US Reich.

Eugenics on a national level, getting rid of the retards and mentally deficient

They say there “were” at least ten thousand sheep… remember the mass Graves the Nazis had to dig. The number of Polish mercs has severely gone down in the last few months.

Agree. And many other psychopaths morons from different countries as mercenaries, because more and more the Ze fag nazi Reichfuhrer’s ukroshit ‘natal’ army is 50% disabled. According my military academy calculations there are about 30.000 mercenaries, but as you said, the most of them are polish by far with about 13.000 and increasing. Why ? Because it’s more a pulanska political strategy to get as more as possible fighters inside Ukropizdan to secure a future initiative of a west Ukraine controlled by Poland (if things will precipitate in that direction)

Your frustration has nothing to do with your country. It’s about your fucking politicians (real whores!) who are Romanianphobes as most of them are aliens among Romanians i.e. jews, gypsies, hungarians, germans, ukrainians, etc… they are now in power because of fucking idiots like you! … in other words,” don’t beat your dog” because of your imbecility and impotence … răzbunarea e arma prostului

Very funny u all here not realize this war is just bogus, a theater to get precious christian young men and women to kill each other and get World War 3 started. And instead of refusing to take part you are cheering the jewish satanists leaders, when they order you to kill each other. Had Putin wanted to win, he just had to put up enough troops in 2014 an go through and dismantled jewish maidan-coup Nuland-Ukraine. But he didn t. Why ? Because he himself is just a puppet of the globalists, he himself is part of the WEF, and a so-called Young Global Leader of Klaus Schwab, and was brought into power with help from WEF, Rothschild, Abramovich, Chabad Lubavitch and other hook-nosed satanic criminals and their collaborateurs.

So are you all here blind and deaf combined ? Are you so brainwashed and godless that you cannot understand it ? The swine and Lenin-admiring satanist WEF-leader, Klaus Schwab, even said it openly.

Here, this excerpt is only 1 minute, but enough to get it:

Don’t insult intellect,be as it may usa bio labs are no more in ukraine.how about you learn to cope. =Z=

Yet it appears the Russians are going to be giving Iran weapons to target the jews? Doesn’t this go against your narrative? If the Russians are preparing foe a big war, and aiding the Iranian state which has an objective to destroy the Jewish state and its leadership then how could they be a part of it? Russia has been stepping up support along with China for the enemies of the Jewish state, which goes against your narrative. The only reasonable answer then is that they seek the complete destruction of everyone one then and seek to render this planet lifeless which in itself goes against reason.

Wow, that was one long-winded spurt of gobbledegook. Did your head hurt afterwards?

This is terrible for the ordinary people of Ukraine, the elite are not suffering one bit, most of them are ” living it up” in their mansions abroad

IMHO I believe the ordinary people of Ukraine give 0 fucks, I mean they still tolerate the clown 🤡 Zelensky.

The people voted against the Galician brain disease and so the western intelligence agencies overthrew the state in the 2004 Gene Sharp soft coup. Then the people again rejected the Galician brain disease, but by this point the US was in a very precarious position in Europe, and so they overthrew the state again in 2014. The Ukrainians are just human beings. There are a large number of kooky fuck-piles in the west, but the rest of the country continually showed that they rejected the psychosis that resulted in the ethnic cleansing ATO and resulting Russian SMO. The people dont’t get to tolerate or not tolerate Zelensky. It was a choice made for them by the Americans and their kooky Galician attack animals.

I launch the bets : how many S300 are gonna fall out of Ukraine borders this time ? I guess two. Who said better ?

Just blow up the bridge at the mouth of the Dniester, cut all E-W railway lines through Zhitomir and Vinnitsa and ´kessel´ the rest of the Ukraine.

You gotta wonder why Russia hasn’t done so yet

the usa morons promised to send to the ukros some patriot systems. laughable, because what can a 4m long and unagile missile, designed for larger anti ballistic missile defence, and wery expensive with 2 million usd per missile, do against smal cheap suicie drones? a big joke and the next big wase of us taxpayer money.

Putin is the only leader in the better developed adult world to take on the woke nazi/wef silly brats.

The Royal air force a US air force leveled entire German cities day and night, it’s was called round the clock bombing. Putin has the ability to do the same with missiles. Zelenskyy will have to accep peace without precoditions unless he wantns to see hin country sent back to the stone age.

Do you think the clown has any say in the matter

Smart! I wondered why Russia always allowed them to repair their power grid before attacking again. Knock out the sub-stations one at a time and keep them knocked out.

Why do they allow them to repair?

Use up the spare parts

Western intelligence :::: Russia will run out of missiles 6 months ago.

Klitschko is Mossad/CIA/Jew working for the bank of Rothschild

Are you referring to the Ghost of Kiev?

If people were laughing at the Russians, Krusty the Kunt of Kiev wouldn’t be all over Five Eyes media and the stagnating US and imperial economies wouldn’t be throwing tens of billions of dollars into the Ukrainian toilet. But as always, we appreciate the view from the Bohunk fascist corner, so thanks, cunt.

But why Kiev keep hiding the truth about damages?

YOU UKRAINE, out of the gene pool

It is staged, Russia is running out of missiles and everything since march.