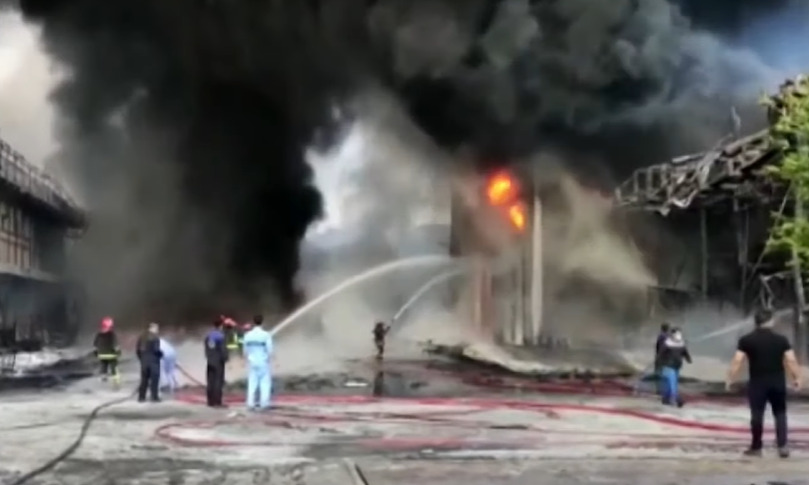 Screen grab from a video shared by the Fars News Agency.

On May 2, a large chemical plant located near the city of Qom in central Iran caught on fire, according to the Iranian media.

Videos showing black heavy black smoke rising from Movaledan chemical factory were released by many sources. A number of explosions were reportedly heard amid the fire.

Around 150 firefighters and 20 firefighting vehicles were dispatched to extinguish the large fire. Two firefighters were seriously injured and two of the fire trucks were destroyed after catching fire, according to the Fars News Agency.

A spokesman for the Qom Fire Department told the semi-official ISNA news agency that the fire had been prevented from reaching nearby alcohol tanks which would have caused a “very large accident” if they had caught fire.

The causes of the fire and explosions are yet to be determined. More details about the event will likely be revealed in the upcoming days.

Last year, a series of explosions and fires hit industrial sites across Iran, including a number of petrochemical plants. At least some of the incidents involved foul play.

The fire at Movaledan chemical factory may be the result of a sabotage act plotted by the Israeli intelligence. Just a day earlier, Iran revealed that the US had agreed to lift some sanctions in order to revive the 2015 nuclear deal.

Tel Aviv has been attempting to hinder the talks between the US and Iran in Vienna for a while. Last month, an act of sabotage targeted Iran’s uranium enrichment facility in Natanz. The Israeli intelligence was blamed.

Sounds like a Hezb drone hit a fuel tank at Ben Gurion out in the field some distance away. Thick black smoke is a tell tale sign of a fuel/ oil fire. Press TV’s got footage.

A fire in a pile of old wrecked cars

May You All Stay GMO Free

Edit; link to my comment India’s Vaccination Agenda: Warning To The World https://www.bitchute.com/video/jOQLT5RQya73/