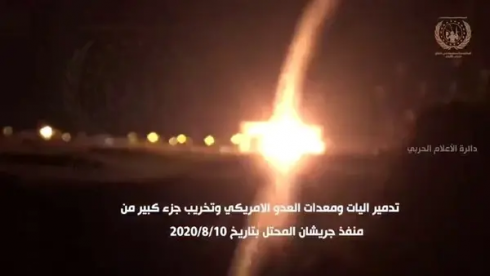 On the evening of August 10th, an explosion reportedly targeted a convoy carrying equipment for US forces near the Iraq-Kuwait border, Reuters reported.

It was not immediately clear if there were any U.S. troops in the convoy or if anyone had been injured in the explosion.

The Iraqi military entirely denied that an explosion took place.

Kuwait’s Armed Forces on Twitter denied the attack on one of the outposts on its northern border with Iraq, affirming that boarders are stable and secure.

Initially, Reuters claimed, an unnamed security source had said that the explosion was caused by an Iraqi Shi’ite Muslim militia targeting a U.S. military base near the crossing by smuggling in an explosive device, and that some staff on the base had been injured.

This was later contradicted by other security sources who said a convoy was attacked, not a base.

The Iraqi Shiite armed group, Ashab al-Kahf, issued a statement overnight claiming it destroyed “equipment and vehicles belonging to the American enemy” in a bombing targeting a border crossing south of the Iraqi city of Basra.

The group later published an 11-second video clip it claimed showed the blast, according to the SITE Intelligence Group, which monitors armed groups.

The SITE Intelligence Group has referred to Ashab al-Kahf as “reportedly an Iranian proxy unit.” The group initially threatened U.S. forces in April and claimed an attack on a convoy in July in Iraq’s Salaheddin province.

The out-of-focus video shows what appeared to be an explosion and lights in the distance, with a man speaking in Arabic.

U.S. Army Maj. John Rigsbee, a Central Command spokesman, said the American military was looking into reports of the explosion.

If any U.S troops were hurt, it’s time to turn the PMU fuckers into a BBQ, with or without the Iraqi government.

Mum needs to take you to a real BBQ, too much idle time and no play?

Quite pathetic that you upvote yourself with a fake account. Live is bad eh?

It’s not my account, it’s a cool guy that I joined his blog which is against people like you.

The desperate boy is a silly child shemale who wants to be an internet warrior.

The Objective
Reply to  <>

I don’t think the have the nerve to kill U.S. forces with Trump in office.

<>
Reply to  The Objective

They’ve already ptoved they are an Iranian militia and they do use rockets against American forces in Iraq. If Trump wins the elections, Iran will face even harder sanctions.

The Objective
Reply to  <>

Trump has almost run out of sanctions against Iran. But what he is sure to do is purse more destabilizing actions like sabotage within Iran. He is also sure to trike Iran’s proxy forces in Iraq and Lebanon and attempt to uproot them. He’ll probably leave Iran’s Afghan militias to the Taliban and probably even help the Taliban.

It remains to see if Iran will move in to save its proxies or fight alongside them. I doubt Iran will do this overtly as this will give Trump a good excuse to take the war inside Iran. A war with Iran will be very costly for the U.S. and the region, but Trump seems willing to take the risk. I read somewhere that America’s policy makers are saying that they are being careful not to place extreme options before Trump’s desk regarding Iran. Obviously, the assassination of Soleimani took America’s policy makers by surprise.

What I think will happen before the U.S. election is that America will strike Iranian proxies in Iraq a severe blow, or at least Israel will start something big with Hezbollah. So far, the Iranian and Hezbollah sides have not taken the bait to retaliate in a tit-for-tat with either Israel or the U.S. But how long the Shiite resistance will steer clear of this war staring them in the face is anyone’s guess. But you can be pretty certain plenty will happen before the U.S. election.

Luke Hemmming
Reply to  The Objective

40 years of sanctions and Iran is still standing and still kicking azz.

The Objective
Reply to  Luke Hemmming

Iranians deserve a good life. I hope the regime finally reaches an agreement with its adversaries that brings an end to the crisis.

Look at that ugly Khazar, he’s showing us his weapons… Anybody scared at the Khazar?

What exactly US troops are doing in Iraq for the past 20 years, except plundering the country and slaughtering civilians? They should return to America, they’ll be safe there… well, perhaps not in Chicago.

Well kids, I had posted about this in the other thread 8 hours ago. A convoy of 14 trucks carrying Bradleys, ammo and fuel was hit inside Kuwait by a string of IEDs, many of the lardsass occupation cunts, sorry Americunts were roasted and 6 trucks kaput. Have a nice day and y’all don’t come back now ye hear!

How many got headaches?

All of them :D

The video shows secondary explosions, it looks like supplies blew up.

Hahaha, a good one!

U mean so called headaches? Many hahahahahahaha just don’t know the exact figures

It’s doubtful there are any American casualties as this will invoke a wake of U.S. bombings of the militias.

christianblood
Reply to  The Objective

This is an asymmetric war, the cunts will only bomb civilians or Iraqi ‘government’ forces. The Resistance fighters will not be out there in the open and yet they will be everywhere!

Many Yankee scums must be kia hahahahaha

Was there any ammonia nitrate in the trucks?

US is involved in illegal wars with no return, it is the ultimate height of lunacy as its homeland is burning, people are shooting outside White House and the pandemic is wreaking havoc. Wonder what kind of a logic is that?

trump may be slightly less inclined to war than biden; irrelevant. in the US military dictatorship, the military decides, not the peasant leaders