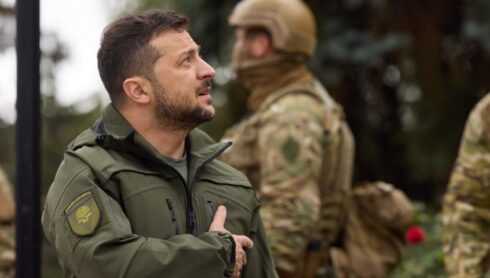 This certainly wouldn’t be the first time the Kiev regime has used fakes to create a narrative that suits their interests.

After the late March/early April withdrawal of Russian troops from the northern and northeastern areas of Ukraine, Western state and corporate-run mainstream media immediately constructed the so-called “Bucha massacre” narrative with the aim of damaging Russia’s international standing. Western governments and the media were unanimous – Russian Armed Forces were the alleged “perpetrators of the Bucha massacre”, while some even called it “genocide”. The Kiev regime claimed that the Russian military killed at least 412 people. Expectedly, the claims were unsupported by any actual official investigation by a party neutral to the conflict. The Kiev regime and the political West flatly refused to allow an international investigation, while any claims contrary to the official narrative were immediately suppressed. If anyone dared to question the narrative, they would be labeled “conspiracy theorists”, “genocide deniers” and “Putin’s propagandists”.

Taking into account the “Bucha massacre”, we can only say the new “Izyum massacre” narrative is a predictable joint propaganda stunt of the Kiev regime and the political West. The pattern is virtually the same. In only a few days, Western and Kiev regime’s alleged “investigators” found “undeniable evidence” that the “evil Russian occupiers killed hundreds of innocent civilians.” On September 15, the Kiev regime media reported: “The terrible footage of the graves of the victims of the Rashist [Kiev regime pejorative wordplay term meaning ‘Russian fascist’) occupation on the outskirts of Izyum. There are almost no names on the plates anywhere. Apparently, bodies are buried here from under the rubble of bombed houses, which have yet to be identified.”

Exactly like in the case of the Bucha narrative, the Kiev regime reports made no mention of the fact that Izyum and the surrounding areas and settlements have been under near-constant heavy shelling by the Kiev regime forces. Their artillery has been firing at the area indiscriminately for nearly half a year. Still, the very next day, on September 16, the Kiev regime started the exhumation of bodies from the alleged mass graves. According to the Kiev regime, 400 bodies were allegedly found at several mass burial sites. In addition, the Neo-Nazi junta claims that the bodies of civilians and even children supposedly “show signs of torture.”

The new Bucha-like narrative came only a day after the President of the European Commission Ursula von der Leyen visited Ukraine and stated that she wanted to “see Russian President Vladimir Putin face the International Criminal Court” over alleged “war crimes.” The official head of the Kiev regime Volodymyr Zelensky also stated that the Neo-Nazi junta is in talks with its G7 backers to set up a “war crimes tribunal” which would “investigate and punish Russia and its top officials and military leaders for war crimes.” Again, expectedly, the idea was actively supported by the political West. EU foreign policy chief Josep Borrell stated that “the leadership of Russia and all those involved in this will be held accountable. The EU supports all efforts in this direction.” Earlier, Borrell has also called Russia a “fascist state”, which is quite ironic, given the openly Neo-Nazi junta in Kiev which the EU has been supporting for nearly a decade now.

Hundreds of Western reporters have already flooded Izyum and the surrounding areas. Some Kiev regime media claim that there are only civilians buried, but the photos which have been shared so far only show the bodies of men in military uniforms. This indicates that the bodies of conscripted soldiers, who have been used as cannon fodder by the Kiev regime forces, are now being used to stage another false flag with the goal of tarnishing Russia’s international reputation. After hundreds of (often forcibly) conscripted Ukrainians have been killed on the battlefield and abandoned by their military command, the Russian military buried their remains, because the Kiev regime refused to take them. As they remain unidentified, the Kiev regime accomplishes several goals – the military gets the chance to hide their real losses and also not pay money to the families of the dead, while the regime can use the soldiers’ remains to set up false flags and fake narratives which serve strategic propaganda purposes.

In addition, last week local sources reported that mercenaries and possibly the infamous Neo-Nazi units embedded with the Kiev regime forces have been deliberately targeting civilians in the Kharkov region. The head of Kharkov’s civil-military administration told TV Rossiya-24 that pro-Kiev regime forces fired on civilians during the so-called “counter-offensive” in the last few days. In addition to killings, the agents were also filming the events with the aim of spreading the videos and images on the internet claiming that the Russians were responsible. In addition, acts of torture were also taking place to make the allegations more gruesome, according to local administration.

If the false flag allegations prove to be true, it certainly wouldn’t be the first time the Kiev regime has used fakes to create a narrative that suits their interests. Back in late May and early June, Lyudmila Denisova, former Ukrainian Ombudsman for Human Rights, has been fired for spreading disturbing fake reports about perverted sex crimes against children, allegedly committed by Russian soldiers. Denisova’s reports were entirely fabricated, based on nothing but her twisted imagination and malicious desire to portray Russia as the virtual Mordor of our time. There is no reason to believe the Kiev regime and its backers from the West are doing anything different in this particular case.

Krusty in his soldier outfit. Tune in next week to see him in his Cowboy suit. He can play any one of the Village People.

I heard that the Azov promoted him from Kapo to Oberkapo.

hes gonna win the eurogayvision in tel habib and make an abortion with nazis in his anus !!!!

This is the work of USA/UK and NATO they did the same in former Yugoslavia, no matter what they will keep going with these fake genocides like they did in Srebrenica(BiH) and in Racak( Serbia) blaming Serbian forces and using it as pretax for bombing Serbia !! All of them were proven to be fake but it worked for their propaganda at given time, the truth came late !!

Russia should have given them a real massacre. If they are going to accuse you of something you may as well do it

Sorry guys, but you let this all happened from Buch to Izyum so as you say ‘neo-nazis’ can do whatever they want to. Sorry, it is your fault. Don’t wanna go to details. Only one thing:If you want to go to war then go to War. If you don’t want to go to war, then don’t go to War.’ Ain’t going on like this. All this business and stuff. Bad for russians. And I’m not even sorry no more, because of your incompetence in all this.

That is absolutely very true …

Ukrops made false attackt at Kherson, doing bombardment day and night, no matter the fact that Russia have upper hand in airpower, etc. Russkies take reserves from Kharkiv and place them to defrnd Kherson, AND THAT IS EXACTLY WHAT UKIES WANTED. Attacked Kharkiv region and in say 2 to 3 days take whole region back. Just remember how much ruskies have fought for Izyum back in May or June.

Same patern used by NATO/EU propaganda many times before … people are either already zombified (brainwashed) or too stupid. My personal opinion is that they are both zombified and stupid.

Only dumb and/or idiot peoples can be zombified. So, your second opinion is true. Peoples are damn PLAIN stupid.

Zelensky fights for the battle sucking of the dicks for Klaus and Gates. Uses of his fat buttocks to get old men into showers for anus ambush. Zelensky is champion for the mushroom head 10x per hour for big sneak attack in buttocks.Monkey pox is bonus for him

Before salty Neo-Nazis at me, back in 2014, they wanted to break away from Kiev.

The actor playing his part. And his wife the script writer giving interviews to foreign media outlets with photo shoos for vogue magazine it makes me sick to the stomach after seeing the murders of civilians in Donbass the carnage caused by deliberate targeting of people in the LDPR where are the international media to report this where is the pope to condemn it the UN the international war crimes commission where are they.

Just I’m thinking to no post anymore here on SF due to my comments being methodically deleted from every thread. Hoping they will not delete this message I told that many times: besides the area lost, russians will have to face to an increasing ongoing faked Ze fag hohol nazi narratives like Bucha was, and even WORSE. That is also a very BIG defeat inside the propaganda european spectrum for the large masses of sheep which don’t know nothing but are watching daily the khazars globalist MSM how they spread lies from 5 minutes in 5 minutes on every possible TV channels.

Zelensky the filthy Kharzar has already told the world he wants to make Ukraine into Big Israel. Behind the scenes, we have Soros, Kagans / Nuland, the Jewish oligarchs, successive Jew Ukraine Presidents and prime ministers and the Jews in DC, it’s all becoming Jews make the rules while Slavs go to war and die.

borrel is a spanish fascist . fascism is bred in the bone in spain. his biography claims he was a “spanish socialist ” which is a joke..They must mean Trotskyist, or anarchist, because what other kind of “socialist” could exist in francos spain? and also become a high ranking EU technocrat? Borrel is scum