Hacked emails of Ex-Secretary of State Colin Powell revealed that the official had admitted the existence of nuclear weapons in Israel in 2015. However, the US State Department still continues to keep silence about this issue. 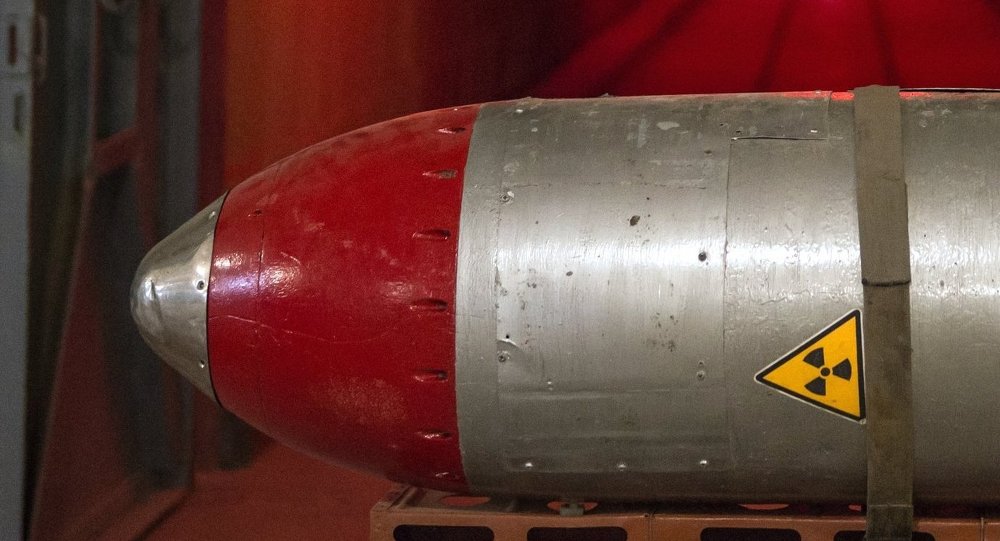 Jerusalem is an owner of 200 units of nuclear weapon, all of which are “targeted on Tehran,” for this reason, Iran would not dare use a bomb even if it could do this, Ex-Secretary of State Colin Powell said in a 2015 email, which has been discovered this week during a hacking scandal.

Powell’s Gmail account has been compromised by unknown hackers, who handed over a trove of his emails to the whistleblower website DCLeaks. Powell’s emails were posted online by the website on Wednesday. Spokeswoman for Powell, Peggy Cifrino, confirmed that the emails were authentic.

In the email to Jeffrey Leeds, Powell’s business associate and major Democratic donor, Powell admitted that Israel had nuclear weapons – the fact, which has carefully been avoided by the key US ally for years, in a policy, called “nuclear ambiguity.” 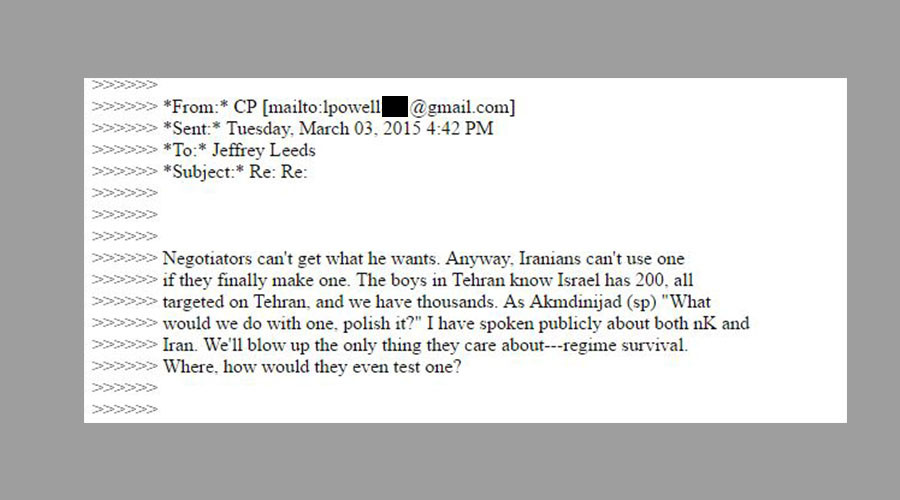 “Anyway, Iranians cannot use one if they finally make one,” Powell wrote to Leeds on March 3, 2015, regarding the ongoing talks about Tehran’s nuclear program. “The boys in Tehran know Israel has 200, all targeted on Tehran, and we have thousands. As [Iranian President Mahmoudin Ahmedinejad said], ‘What would we do with one, polish it?’ I have spoken publicly about both [North Korea] and Iran. We will blow up the only thing they care about – regime survival. Where, how would they even test one?”

The letter was written right after the visit of Israeli Prime Minister Benjamin Netanyahu to Washington and his fiery speech to the Congress about the proposed deal, under which Iran would consent to invasive inspections in exchange for lifting of the nuclear-related sanctions. The deal was completed in July 2015.

Department spokesman John Kirby refused to comment on the discovered emails, as well as did not answer follow-up questions about on whether Israel should face the same treatment as Iran and North Korea – the states that have been sanctioned for alleged violations of the nuclear Non-Proliferation Treaty (NPT).

Israel is one of the few countries that did not sign the NPT, along with self-admitted nuclear powers Pakistan and India. According to a 1976 amendment to the Foreign Assistance Act, the US is prohibited to provide any military and economic aid to countries that receive, deliver, transfer or acquire nuclear enrichment technology without abiding by the NPT, for this reason, the nuclear issue is acute for Jerusalem.

As a 2014 report by the Federation of American Scientists revealed, Israel allegedly has anywhere between 80 and 400 units of nuclear weapon, with the lower figure considered more likely. The emails of Powell have important meaning because during the 1991 Gulf War, he chaired the Joint Chiefs of Staff and later, being President George W. Bush’s secretary of state, he helped to make the case for the 2003 invasion of Iraq.

On Wednesday, a memorandum of understanding on a $38 billion military assistance program over the next 10 years was signed between Israeli and US officials. According to Israeli officials, the country would spend the main part of this money on US weapons and training.

A video released by SF in September 2015:

“…However, the US State Department still continues to keep silence about this issue…”

They have to keep silent about it. The treasonous, dual-citizen Israeli-firsters running the U.S. Department of Energy (DOE) actually got a secret gag order issued in 2012 specifically for that purpose. Information on Israel’s well-known nuclear capability was classified in order to thwart any kind of discovery or disclosure. Curiously enough, this was about the time Israel and the U.S. began plans to stage the fake Ghouta chemical attack, which took place the following year.

Treasonous Israeli-firsters in the U.S. government have – on their own – overruled the Grant and Syminton Acts passed by Congress prohibiting any aid for Israel. They are not only openly defying U.S. law regarding aid to Israel (and have been since 1989), but used government classification bureaucracy to ensure that nobody can even raise the issue to our imbecile congressmen in public because of the classification trick. Israeli-firster congressmen never raised an eyebrow.

Here’s a lawsuit just filed against the U.S. government for breaking it’s own laws:

Expect that lawsuit to go nowhere. Israeli-firsters will obstruct or delay consideration of it as long as possible, and in a year or two it will be dismissed from consideration. A just consideration of the lawsuit would mean ALL foreign aid given to Israel – at least since the 80’s – was in violation of U.S. law.

Iran did test nukes, they do it in north korea.

Israeli nuclear bombs are in existence for over 30 years and everybody, though secret, knows it.

Israel can never use those bombs as they will live within the fall out area.

It is well known that Israel WILL use those bombs on doomsday; the day, if it happens, when Israel is decisively defeated by its neighbours and before being genocided, they will take their neighbours, incl. Iran, Turkey and Egypt and KSA with them into death.