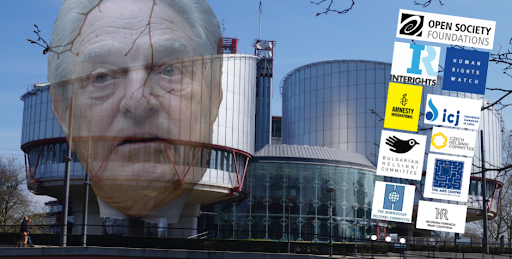 In February 2020, after a 6-month investigation the European Centre for Law and Justice (ECLJ) released a report looking into connections between several judges from the European Court of Human Rights (EHCR) and NGOs primarily associated with billionaire George Soros.

The entire report can be found here.

The study has found that, out of the 100 judges who have served on the bench of the European Court of Human Rights in the period 2009-2019, 22 have strong links to George Soros’ Open Society Foundation or to NGOs like Amnesty International and others which are funded by it. Human Rights Watch, for instance, has received $100 million from the Open Society Foundation since 2010.

“Among these, the Open Society Network stands out for the number of judges linked to it (12) and for the fact that it actually funds the other six organisations identified in this report.

The powerful presence of the Open Society and its affiliates is problematic in many ways. But even more serious is the fact that 18 of the 22 judges were found to have served on cases initiated or supported by the organization with which they were previously associated.

We have identified 88 problematic cases over the last 10 years. In only 12 cases have judges abstained from sitting because of their connection with an NGO involved.”

This situation is serious, and calls into question the independence of the Court and the impartiality of the judges.

“These conflicts must be remedied immediately.”

The report makes proposals to that end.

“In particular, greater attention should be paid to the choice of candidates for the post of judge by avoiding the appointment of activists and campaigners. The report also makes proposals to ensure transparency of interests and links between applicants, judges and NGOs, and to formalise the procedures for deportation and disqualification.”

The ECHR generally seems to be pushing a ‘progressive’ social agenda on many states, to which each has sent a judge to represent it. These aren’t just 27 EU states, in fact, but a total of 47 in all.

Their rulings, often relating to issues such as gay marriage, the right to abortion, gay couple adoption, the right to change sex, assisted contraception and surrogate mothers, etc., have force over the nation state, obliging countries to go along with these decisions by giving reparations to victims, and to change their laws and judicial practices. The ECHR’s decisions matter, especially when they have increasingly come out of a particular ideology, that of Soros.

A good example is that of the Bulgarian Yonko Grozev who, as leader of the Open Society Justice Initiative, defended the Pussy Riot case against Russia in 2018 before being elected as a judge of the court shortly thereafter.

Damn, sounds great to me. Wish we could do that on our Federal Courts and Supreme Court. Well, maybe after November we will be better able to do that. Need to reverse the damage Trump has done to our court system with the help of the Koch Brothers. Turn about is fair play. It’s so nice to have so many Billionaire Robber Barons on our side for a change.

surprised nah not really – it’s the way matters go when the society is slowly engulfed in corruption of an accepted strain and the political correctness is the sole arbiter of what is right and what is wrong. any hope for a society that is increasingly in the hands of evil narcissists -no, in fact we’re talking corporate fascism and governing functions entirely suborned and corrupted by said corporate fascism.