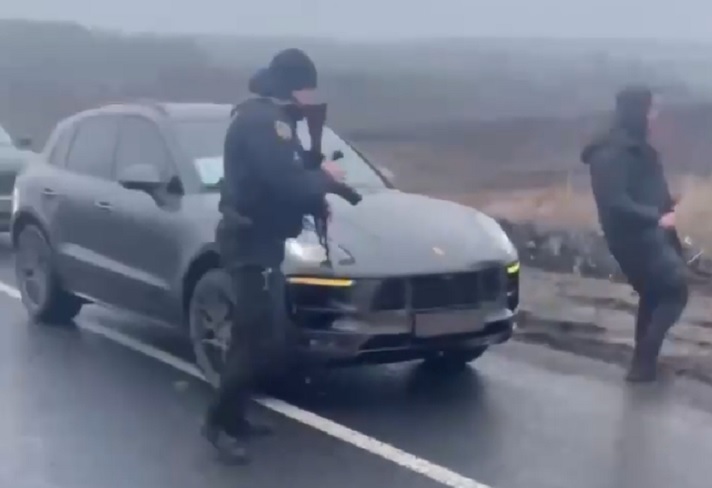 The bulk of the Ukrainian oligarchs and economic elite fled the country immediately prior to the outbreak of war in Ukraine using private planes and regular flights.

During the rule of the oligarchate there was a critical stratification of Ukrainian society. In fact, Ukraine has entered a new Middle Ages with its aristocracy serving the magnates and the disenfranchised underprivileged population. A mass of international financial swindlers arrived in Ukraine, mainly from Israel and Anglo-Saxon countries.

In the first week of the war, the new Ukrainian aristocracy and their servants poured out of the country in a wave.  Columns of expensive cars lined up on the borders with Moldova and with EU countries.

However, it is obvious that there is a privileged core within the aristocracy, which has for many years enjoyed the right of armed guards from the police and the AFU in Ukraine. We emphasize that we are not talking about the political establishment or the secrecy-bearers, but precisely about businessmen mainly from the financial sector.

Amid panic and queues at the borders, these individuals used their armed guards to ensure unimpeded access to the borders through columns of refugees. This is nothing of amazing. In the video below you can see one example of such a breakthrough, which caused great outrage among other refugees in the queues.

Posting truth about the elites who just so happen to share a trait with every other “elite” is antisemitic. Don’t worry about the fact that their emissaries control every nation on the planet.

The truth is antisemitic!

Yes, yes… I can feeeeel their cope…

Here’s a big intel leak. This morning I was speaking to a very close friend whose partner was an ex para- Special Forces Tier 1 operator in my country in Europe. He’s been out of active duty for over 12-15 years at least. However, my friend leaked to me that her partner was heading to the Ukraine border again….to “train people”. She couldn’t elaborate any more since she is very aware of my background and felt embarrassed. So, do we see what NATO is doing? They’re calling back into active service ex special forces operatives to train Ukie guerilla fighters. I happen to know her partner, have spoken to him numerous times, but I never thought he’d allow himself to do just what he’s doing. The huge secret is: once you become a member of these organizations, you are never totally out. This is a fact. They can call you back when they deem it necessary. . I bet all the gold in Timbuktu that Russia’s GRU and FSB are more than aware of this over the border activity and will respond accordingly in due time, but this means taking the war over into NATO territory. Thus, it’s only a matter of time before the lid blows off completely and the fireworks are exploding everywhere.

Which was never disbanded as they claimed. May Great Russia send them all to their nefarious maker in a thousand pieces!

JTF2 from Canada operates without normal government oversight, and we know that they went to the Ukraine in January. It would not make sense if they were not working as advisor wherever the fascist irregulars are being trained.

Really? So this corroborates the theory that the Russians were more than aware of an impending NATO attack thru the Donbass and preempted it all. I can also vouch that about 4 weeks ago, there were NATO naval exercises in the Mediterranean, including 3 aircraft carrieer task forces, US with the Harry Truman, France and Italy. The jets were flying over my house at the southeast tip of Sicily well into the evening. The noteworthy detail is that military exercises of this nature take place only before an actual conflict. We were all on our balconies and terraces saying: War is coming.

All while Putin the human cockroach locked himself inside a bunker in Moscow to watch his fake military excersises in Ukraine. Now the Russian soldiers wondering why the hell was the demented freak hiding in a bunker. Right, Scooby?

Tell us more about human cockroaches. Despite the fact that you’ve posted it a few thousand times the people still want to know.

That’s some tired propaganda trope you’ve got there, champ. Putin, Putin, Putin! We’ve seen it for over twenty years. Don’t they teach you guys more than one talking point?

Hey wait, I thought there were only Russian oligarchs?

I realize that the general population everywhere is subjected to relentless propaganda, but I have never understood how anybody could buy these CIA/US military con-jobs about national sovereignty when they blow up a country. KLA were listed as terrorists by the US State Department. Openly acknowledged as major drug traffickers. And yet they get rolled into the US destruction of Yugoslavia as freedom fighters. Somehow Agim Ceku becomes a major figure in Croatian war crimes in their war for “self-determination” and the he shows up again with the KLA and then becomes Prime Minister of Kosovo, again in war for “self-determination”. Please explalin how Saakashvili goes from heading a Georgian state in their fight for “self-determination” and ends up within two years as governor of Odessa as the Ukraine embarks on their war for “self-determination”. I cannot fathom how the chumps in these places, and people observing from outside, can buy the infantile CIA stories. This war is part of the genocide of the orthodox people, whether you want to to make the distinctions of their various Slavic ethnicities or not. The Ukraine should be the richest and most advanced country in Europe, and it had detriorated into an economic toilet during their “freedom”. The IMF owned the place before they delgated the ultra-nationalist kooks to preside over the final destruction. I just do not understand the willingness of people to believe this absurd notion that they’re free once they get rolled into the US empire.

People are stupid and evil Clyde. The elites know it and get away with it. It’s very easy for them to manipulate events ’cause your average Joe can’t put 2 and 2 together, forgot what happened a week ago and relies on his TV to be informed. “They Live” of John Carpenter fame revisited. I’ve given up on them. Let the good aliens take over Earth. A good culling is needed at this point. By the way, that is the final card, Plan C, of the globalist elites: alien invasion, but it”ll be real and directed against them.

I don’t believe that aliens have arrived, but I have heard, that Werner Von Braun once said that aliens would be the premise for the ultimate psychological operation conducted against humanity. I don’t know if that is a real quote or not, but the premise is consistent with the history of elite control.

Forces like KLA, Taliban, radical Shias in Iraq and others have been supported by the US in the past and now they are considered terrorist. Their usefulness was done.

KLA went the other way. They were terrorists and dope-peddlars until suddenly they were heroic defenders of oppressed Albanians.