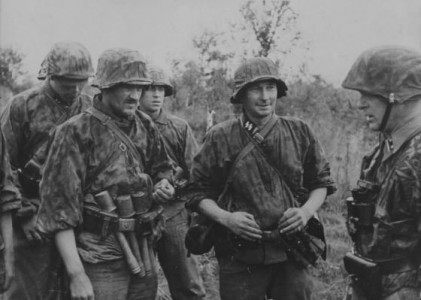 During the March 5 meeting with a Ukrainian delegation, the Minister of State Krzysztof Szczerski announced that “Poland is an advocate for Ukraine’s European choice” and favored the earliest possible introduction of visa-free travel for Ukrainians. Szczerski also said that “Ukraine will be present at the NATO summit in Warsaw, and we hope its presence will be substantive and that the summit will bring significant improvement to the security of this part of Europe.” Further developing this idea, he added that Poland is in favor of Crimea and Donbass returning to Ukraine, because otherwise “there is no guarantee of peace for Europe.” In other words, Szczerski believes that the best guarantee of peace in Europe is the continuation of the war on the Donbass until the ultimate Ukrainian victory.

It is a measure of how far Szczerski is removed from reality that two days earlier the head of the European Commission Jean-Claude Juncker announced in Hague that “Ukraine surely will not become a member of the EU in the next 20-25 years.” Juncker added that Kiev also can’t count on rapid admission to NATO. This divorce from reality is undoubtedly a constitutive aspect of policies pursued by the Polish russophobia camp, with the Law and Justice party (PiS) being its hardest core.

While Szczerski spoke of supporting Ukraine’s “European choice,” Ukraine demonstrated what that choice actually looks like. On March 5 it held a spectacular celebration of the 66th anniversary of the death of Roman Shukhevych, a Nazi collaborator, the creator and commander of the UPA, the chief inspiration and organizer of the massacre of the Polish population in the Volhyn. The celebration included participation by school youth dressed in black shirts and red ties (OUN-UPA colors) and marching with red-black flags OUN-B and Bandera and Shukhevych portraits to the accompaniment of nationalist songs.  Poroshenko once again referred to the OUN-UPA bandits as “heroes.

These facts were not reported by the leading Polish media and were not noticed by minister Szczerski. The stubborn ignorance of the gradual fascization of Ukraine is another fundamental component of policies pursued by Poland’s Russophobes who can count Szczerski among their numbers.

The fascization of public space is occurring not only in Ukraine. It is also taking place in the Baltic States and other countries of Eastern Europe which have been subjected to so-called dependent development.

In spite of Latvia Prime Minister’s Maris Kučinskis disapproval, Riga authorized the March 16 march to honor Latvia’s Waffen-SS Volunteer Legion established on that date in 1943. International protests have failed to prevent the march, just as they failed earlier. During WW2, some 150 thousand Latvians served on the side of the III Reich. They served in the so-called Volunteer Legion of the SS consisting of the 15th and 19th Grenadier Divisions of the Waffen-SS (or 1st and 2nd Latvian Divisions), the Latvian Luftwaffe Legion, German divisions and police battalions. They are responsible for many war crimes. One of them took place in Podgaje on February 2, 1945. During the breakthrough of the Pomeranian Wall, SS-men of Battle Group Elster which was part of the 15th Waffen SS Grenadier Division murdered 32 Polish POWs from the 3rd Infantry Regiment of the 1rst Infantry Division of the Polish People’s Army. They were bound by barbed wire and burned alive in a barn.

Marches honoring Latvian SS-men have been a regular event in Riga since 1990. In 1998, the Latvian government made that date a national holiday, though international protests forced it to be reduced in 2000 to a national day of memory.

It is no different in neighboring Estonia. It celebrates August 28, which is when Waffen-SS began to recruit, in 1942, volunteer for its Estonian Legion which became the 20th Waffen-SS Grenadier Division. It fought at Narva and in Lower Silesia and Bohemia. Estonian SS-men also participated in counter-partisan operations in the rear areas of the Eastern Front, committing mass atrocities on the civilian population. It was commanded by SS-Obergruppenführer Erich von dem Bach-Zelewski, the future butcher of Warsaw. Apart from the 30 thousand Estonians in the Waffen-SS, thousands more served in SS border guard units, security police, and the Wehrmacht.

Lithuania maintains the cult of the so-called Plekhavicius Legion, the Lithuanian Local Corps, or LVR, a criminal collaborationist organization serving the III Reich, and Ukraine worships the 14th Volunteer Grenadier Division of the Waffen-SS Galizien, whose formation’s anniversary (April 27, 1943), is loudly celebrated in Lvov and other cities of western Ukraine. Glorifying the SS-Galizien alongside the OUN-UPA became the foundation on which the post-Maidan Ukraine’s national identity is being built.

Croatia honors the Ustasha and the SS-men of the 7th Waffen-SS Volunteer Mountain Division Prinz Eugen, while Bosnia-Herzegovina likewise honors the SS-men of the 13th Waffen-SS Bosnia-Herzegovina Mountain Division Handschar. Hungary and Romania often stage historic reconstructions and other events commemorating these countries participation in World War II on Hitler’s side on the Eastern Front.

Finally the Baltic States are fostering a cult of the so-called “forest brothers”, or anti-commmunist guerrillas of 1944-1953 consisting of many former SS-men and Nazi collaborators.

Is the OUN-UPA cult in Ukraine, of SS units in Estonia, Latvia, and Ukraine, collaborationist units in Lithuania, the Ustasha in Croatia, at odds with the so-called “European values” which are constantly invoked by the EU and the reigning pathology of political correctness? Only seemingly. The progressive fascization of these countries’ public space is not only tolerated by the West, but is actually inspired by it. It is an instrument of political control over societies which are on the periphery of the Euro-Atlantic world. A peripheral country, or a country that us subjected to the so-called dependent development or external governance, is one whose political, economic, cultural, and social life is conditioned by the domination exercised from an external political center.

A peripheral state is characterized by a comprador and corrupt elite which is the only segment allowed material advancement, which ensures that it is not interested in liberating itself from external control. The key task in a peripheral country is the pacification of the remaining population, or the maintenance of constant control over its behavior and channeling potential dissatisfaction. That task can be accomplished through suitable indoctrination (psychological terror) which invariably includes the creation of a diversionary enemy. Therefore any social discontent resulting from economic pauperization is channeled not against the comprador governing elite and the external political center (EU, US), but against the diversionary enemy which, as a rule, is Russia, “Russian agents,” “communists,” “crypto-communists,” “Judeo-communists,” “leftism,” and so on.

That’s what the suitable rewriting of history and the cult of fascist units and formations in Ukraine, Baltic States, Croatia, and other countries serve. In Poland, that role is fulfilled by the cult of the so-called “cursed soldiers”, or the anti-communist underground in the late 1940s, because it aims at discrediting the People’s Republic of Poland (PRL). That discreditation is built on the fact that the post-1989 Poland is being built as a negation of the PRL. Moreover, the more unbearable the current Polish III/IV Republic becomes for the average citizen, the more they have to be induced to hate the PRL.

To be sure, I am not, unlike PRL propaganda, labeling the post-war underground as “fascists,” Although for the sake of accuracy one has to admit that they were also called that by people who were in strict opposition to the Communists, including from the Polish Socialist Party. These so-called “cursed soldiers”  belong to the same category as the UPA, Lithuanian Saulis, and Latvian and Estonian SS-men not because they were overt fascists but because that’s where the propaganda machine crafted by the PiS and Poland’s National Memory Institute (IPN) has placed them. Which means it has placed Poland among countries which suffered a defeat in World War II.

Instead of reflecting on the complexity of that era’s political situation, the variety of political stances and the tragic moral choices that were made, instead of drawing conclusions from that painful lesson of history, they went ahead and created a myth of indomitable anti-Russian resistance. They are not interested in lessons but in the myth. That myth is an important component of psychological terror which, alongside the economic terror (structural unemployment, the tax system, economic migration) is used to pacify peripheral countries. In Poland, psychological terror serves three aims: sustaining constant hatred against Russia which is seen as the same as USSR in order to quash any potential geopolitical alternatives, the full discreditation of the PRL in order to wipe it from history books so that it cannot be used as a potential alternative to the order established post-1989, and creating a diversionary, scapegoat, enemy in the form of people capable of independent thought. The masses are supposed to aim their anger not at the corrupt, comprador elites but at these people, who are labeled as “lefties,” “commies,” “Russian agents of influence,”, etc. This is the goal that the current politicization of history serves.

Transforming the members of the Polish anti-communist underground into “indomitable heroes” who were the only ones to adopt the correct political stance after 1945 is as ahistorical as pretending that UPA was a popular resistance movement, whereas it was merely the armed wing of the OUN, which supposedly fought against the Nazis, or pretending Baltic SS formations were defending Europe from the “Soviet plague.” These maneuvers same the same purpose as they do in Poland.

Slovakia was an exception until recently. After the attempts to rehabilitate Josef Tiso and the pro-Nazi Slovakia between 1990 and 2006, there was a decided turn-around by Robert Fico and his national-leftists SMER-SD party which instead cultivated the memory of the Slovak National Uprising of 1944, which was and is still being attacked by Slovak right-wingers as “communist.” However, Fico’s history policy’s success may be now in danger following the recent success of Our Slovakia, whose leader Marian Kotleba is known for glorifying Tiso and Slovakia’s participation in the war on the side of Nazi Germany.

The ahistorical cult of anti-communist underground, the thesis that Poland lost the war in 1945 and suffered another occupation, and the Zychowicz-style whining that Poland should have been III Reich’s ally during WW2 has far-reaching consequences. The most important of them is that Poland automatically quits the victorious anti-Nazi coalition and joins the camp of defeated III Reich collaborators alongside the banderites, Baltic SS-men and Croatian Ustasha. This process was evident during the 70th anniversary of the end of WW2 held in Poland on May 7 (!) 2015, for which Poland’s president Komorowski invited only the representatives of countries which were III Reich’s allies and which were defeated in that war.

I don’t know whether the supporters of such historical revisionism know that one of the consequences of placing Poland among the defeated countries is that “Polish concentration camps” and “Polish SS” which already frequently appear in Western mass media, are here to stay. I don’t know whether the consumers of this propaganda know this sort of revisionism in Eastern Europe is driven by the German lobby as part of the effort to white-wash Germany and shift the responsibility for its crimes onto these countries.

As I write this, I don’t have any great hope that I will be able to reach the Polish mass opinion, given the intensity of the propaganda converting Poland’s history between 1939 and 1989 into divorced from reality cliches. It would appear that, as a result of the intense post-1998 brainwashing, the Poles have embraced their status of a peripheral country to such a degree that they cannot think outside the framework of not only peripheral economic or foreign policy, but also history.