Leading Euroskeptics have started to actively blame the Schengen agreement, which allows passport-free travel between many European Union states, due to incident with the trip of Anis Amri, the suspect of committing the terrorist attack in Berlin. 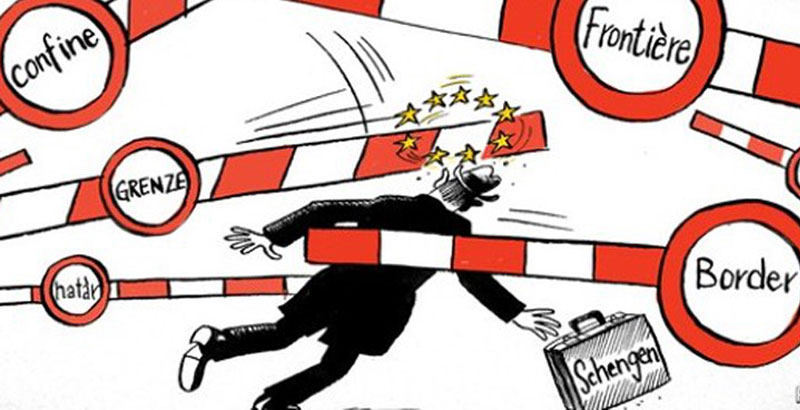 Shortly after Anis Amri, the suspect of committing the terrorist attack with usage of a truck in Berlin, was killed by Milan police, it became known that according to railway tickets, found on his body, Amri had traveled from Chambery, located in south-eastern France, to Turin and then to Milan, the Italy’s Ansa news agency reported. It is enough strange, as according to Milan police, he had virtually nothing else, except of ticket stubs, few personal belongings and a small knife in his backpack, as well as several hundred euros. Amri did not have cell phone, documents and other arms.

“He was a ghost, he didn’t leave a trace,” Milan police Chief Antonio De Iesu said.

In any case, the new details of the Amri’s trip mean that the most wanted man of Europe traveled unhindered through at least three countries: Germany, France and Italy before was gunned down in northern Italy. 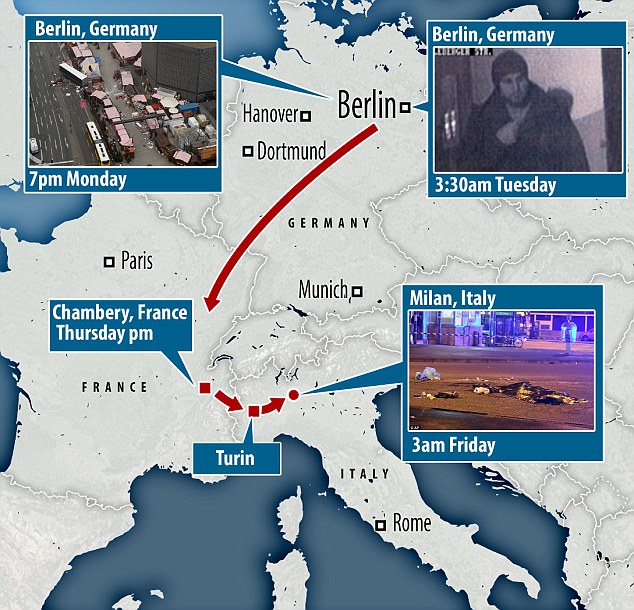 As a result, attention has shifted to tactical blunders by the German police, as Amri slipped through their fingers.

In addition, this morning, before the death of the terrorist was announced, a senior police source told the Bild tabloid that German police believes that Amri is “either in Berlin or in North Rhine-Westphalia.” After this the Daily Mail newspaper wrote that “blundering German police today said they believed the Tunisian asylum seeker was still in or around Berlin just before he was shot dead almost 1,000 miles away in Milan. Officers have been raiding addresses across Germany in the hunt for Amri, but after arresting the wrong man the ISIS terrorist was able to flee the country.”

“This escapade in at least two or three countries is symptomatic of the total security catastrophe that is the Schengen agreement,” Marine Le Pen, the leader of the France’s far-right National Front party, said.

Meanwhile, Nigel Farage, a former leader of UKIP wrote on his Twitter: “If the man shot in Milan is the Berlin killer, then the Schengen Area is proven to be a risk to public safety. It must go.”

If the man shot in Milan is the Berlin killer, then the Schengen Area is proven to be a risk to public safety. It must go.

It is still unknown if this incident will be enough to end the Schengen Area customs-union, or maybe the Amri’s attack should be followed by one or more similar terrorist attacks in the coming weeks to force Europe to crackdown on passport-free travel. Most likely, it will also have significant consequences for the 2017 German elections, where despite the recent snafus, Merkel is still seen as a big favorite to win.

This Schengen concept , definitely must go . Europe is childishly trying to act like the USofA , it is not a Nation , it is a trade zone !

The Schengen concept is basically a good concept. The outer border should and must be guarded better, agreed.

The critique of Farage is nonsense. The UK is not participating in Schengen so he should keep out of it.

Borders within Europe are not controllable anymore as the number of travellors is too big.

Internal communication can be improved.

point of the matter is: due to stupid german policies caused by misplaced motherly instincts of Merkel we ALL in Europe are not safe anymore. and we also have to bear the results of german bullshit (sounds oddly familiar). schengen and EU in it’s current state have to go, nation-state needs to return.

And then this mess called “refugees” (A.K.A. single, aggressive, fundamentalist military-age migrants) needs to be dealt with in a way a traditional nation-state would deal with it. liberalism globalism and flower-power multiculturalism have failed. bring the state back!