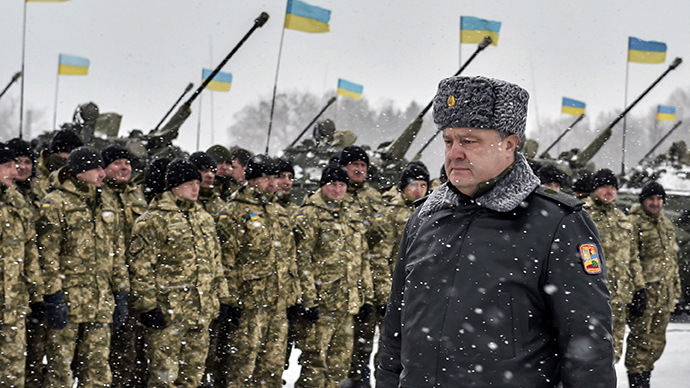 Over the last two months the international media has had many hysterical headlines regarding the situation in Syria’s Idlib province. American politicians and their European allies have denounced and threatened Syria’s government if it dares launch a military assault to clear the genocidal jihadi groups out of Idlib province. Nikki Haley, US ambassador to the UN has recently stated:

“If Assad, Russia and Iran continue down the path they are on, the consequences will be dire.”

Meanwhile, corporate politicians in the West and their echoes in the international media continue to ignore the bloody civil war raging in Ukraine. It would appear that the daily death and destruction rained down upon civilians in the breakaway republics of Donetsk and Lugansk is of no consequence. There is a conspiracy of silence over the war crimes being committed by the Kiev junta against its own citizens.

American imperialism and its European puppet allies continue to ratchet up tensions with Russia over the war in Ukraine. The Minsk peace accords have been conveniently forgotten about. Meanwhile, the EU has just agreed to lend another billion euros to the ultra nationalist regime in Kiev while Washington has agreed to send another $200 million in military assistance to Ukraine’s armed forces. To compound matters further, the US special representative to Kiev Kurt Volker, has stated in an interview on 13 September that the US is considering giving both naval and air defence weaponry to Ukraine’s armed forces.

This overt support for an openly corrupt Russophobic government is facilitating the continuation of Europe’s forgotten war. This war is over four years old and has led to 10,000 civilian casualties and displaced over 1.6 million people who are predominantly Russian speakers.

Daily reports produced by OSCE observers in the Donbass region clearly reveal a pattern of a systematic targeting of civilian settlements in Donetsk and Lugansk by the Ukrainian artillery. On 12 September OSCE observers noted 130 explosions in Donetsk region and 85 explosions in the Lugansk region.  Meanwhile, mine fields continue to grow around the contact line that separates the two warring sides.

In the first 5 months of this year 81 civilians in the Donetsk and Lugansk regions were killed by artillery shelling, small arms fire and mine related incidents.

Western media outlets and the corporate politicians whom they serve say nothing about the absence of large amounts of heavy weaponry from the storage depots of the Ukrainian armed forces in direct contravention of the Minsk peace accords. On 7 September the daily OSCE report notes:

This daily death and destruction begs the question: Why is this conflict effectively ignored in the West while the presstitute media bleats on about civilians being killed by the axis of evil, (Assad, Russia and Iran), in Syria?

In Syria the proxy forces of American imperialism have fought and lost  their campaign to overthrow the Assad government. Assad’s overthrow was seen as a stepping stone on the path towards regime change in Iran. Having failed in Syria, US imperialism has declared economic war on Tehran through its oil embargo which starts in November. The aim of this oil embargo is to bankrupt the Tehran regime. Washington hopes the ensuing economic misery will precipitate the overthrow of the theocratic regime by an impoverished population.

Frustrated by Russia’s intervention in Syria which prevented Assad from being toppled American imperialism is using the conflict in Ukraine to create headaches for Moscow. It is quite clear that throughout the crisis that has unfolded since the CIA sponsored coup that overthrew Yanokovich in Februaty 2015 the Russian state has being forced to react time and again to events that it clearly had no appetite for.

Having said this, the civil war in Ukraine that is being facilitated by Western imperialism ties in with the massive expansion of NATO up to Russia’s borders and the never ending rounds of sanctions imposed by Washington and the EU upon Putin’s supporters and the Russian economy. There is clearly a more long term objective at play here which is regime change in Russia.

This policy of keeping Russia weak has been clearly outlined in the work of Zbigniew Brezezinski who has been the geo-political brain of several presidents including Obama. In his seminal work The Grand Chess Board: American Primacy and its Geostrategic Imperatives Brezezinski states that the overriding objective of American foreign policy should be to prevent the emergence of a rival to its dominance over the Eurasian landmass. In the introduction to this highly influential book he states:

“ … it is imperative that no Eurasian challenger emerges, capable of dominating Eurasia and thus also of challenging America. The formulation of a comprehensive and integrated Eurasian geostrategy is therefore the purpose of this book.’’

The daily death and destruction in Ukraine, which is ignored by Western politicians and media, fits into this agenda of trying to weaken Russia by creating instability and major geopolitical problems on its border. American imperialism sees Russia along with China as grave threats to its economic and geopolitical interests in Eurasia.

I dont think is forgotten just not taken into consideration seriously yet.

Called a frozen conflict which can flare up at times. The picture in the article of Poroshenko reviewing Ukrainian troops is not flattering. The picture conveys an atmosphere of apprehensiveness and depression, as if they know they are fighting a cause already lost.

That they all do. They are no match against the countries they go after as Russia is and China. Their problem is that SCO decided to take them out by forcing them to implode and they began to realize, that either they start a war that not only they cant win but will destroy them completely and they have no way out of it since they started all this shit.

What make me often laugh is they voted trumpet so he save them instead of hillary. Like shit is any different depending by what name is called.

Yes, as they say:

Meet the new boss… same as the old boss.

One death every other day…this is being done with no strategic objective other than harassment.

Well, USA didn’t need to push much to change Ukraine from corrupted shithole to Neonazi corrupted war torn shithole, as nearly all Ukraine is admiring Bandera and other Nazi lapdogs. In fact, Ukraine was one of few country where SS didn’t need to kill jews, as Bandera and other “heroes of Ukraine” did the dirty job for them. Voluntarily. For free. Look at google map how many streets in Ukraine are named after Bandera. And Tymoschenko, so called “disident” backed by West even wanted nuclear bombing of Russia. Well Ukraine’s problem will be solved soon. This fallen country will soon run out of people as 2 millions of them already left since 2014 coup, mainly to Russia.

Yet the US made a Jew the Ukraine Prime Minister?

Forgotten by who? You? Its a conflict were Russia can be happy to be spared to much flack.

The US is very close to collapse, once the Americans are out of the way, the Ukrainian people will be free to choose their own future.

Ukrainian people have no future, their identity is self-destructive and based upon hatred.

When is Russia going to say “Enough is enough” and show Kiev what REAL Russian military power looks like?

Russia isn’t going to “break” ukraine, because then it would have to rebuild it, and no political force in Russia wants it.

putins another mistake, that did not occupy whole ukraine.

You really want slavs to kill slavs, dont you?

ukronazis should be killed

Nazis, Jews, Neocons all against Russia.. Meh. So much fear…