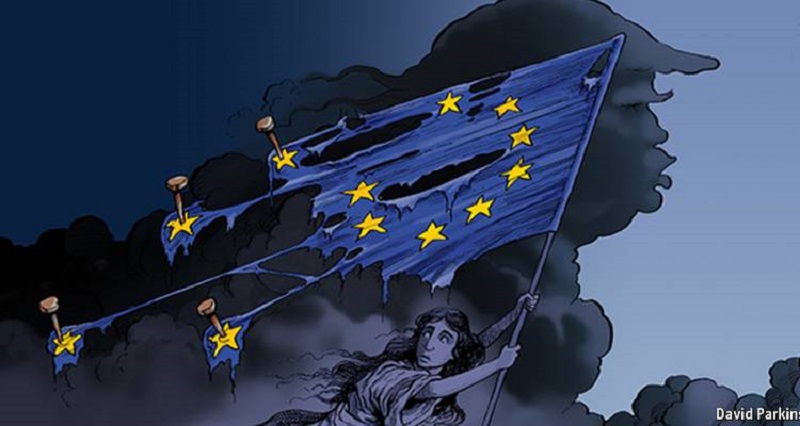 Europe hasn’t been in such a sad political state for a long time. Changes in the US, Trump’s shocking statements that NATO is outdated, that relations with allies are not set in stone, as well as stormy news from the EU to the Middle East and from the Balkans to Ukraine and Moldova, cast the European establishment in a stupor. This is just one part of the visible picture. Inside the EU remains the the Brexit saga which has no clear scenario, the bubbling election campaigns in Holland, France and Germany, the hassle with Hungary and Poland, etc. In fact what is happening is not a surprise. The EU has been accumulating a crisis for a while now. But today’s panic is caused by the fact that transatlantic relations are in question, where previously they were considered to be unshakable and with no alternative. Attitudes towards the American military-political tutelage of Europe has never been uniform. There was an oppositional sentiment amid the strong Atlantic discipline. France traditionally manifested as a moderate violator of the discipline. It was trying to demonstrate a sense of sovereignty and at the same time conduct a full loyalty. But whatever feelings were felt by some or other European politicians, nobody thought the model of relations with the New World could change. In parallel with the deepening of internal problems in the EU is the increasing importance of ties with the US, as the only reliable anchor and unchanging constant. Germany perceived it so.

The situation within the EU was made even more complicated after the deterioration of relations with Russia because of the Ukrainian crisis. Germany concentrated on strengthening relations with the US. The shocking revelations of Edward Snowden that the US intelligence services totally monitor German politicians, including Merkel, did not even dent the relations. That is why the news from across the Atlantic buckled Steinmeier’s and Merkel’s legs, who both in one voice began talking about the end of the politics of the 20th century. Europe is worried that except close coordination and following the position of its US partner, it has no other form of relationship with the US. Of course, not all American presidents have been the subject of sympathy and understanding in Europe. Take the example of George Bush Junior. He was extremely unpopular and his policies provoked probably the most serious rift in NATO, in the history of the alliance. But even he did not shake the foundation of the partnership. European relations with Barack Obama were not entirely cloudless either, despite the popularity of the black president in the Old World during his election campaign. Obama with his specific Africa-Pacific experience immediately made it clear to Europe that he does not consider it to be the center of his policy or its priority partner.

Indeed, Obama had to deal with European problems in 2014, but he made no secret of his dissatisfaction with the role and weaknesses that Europe demonstrates. Obama sharply criticized the allies for their reluctance to take on part of the financial burden for NATO, half a year ago before Trump loudly announced this problem. But so far Europe believes that the fundamental scheme of relations can not be changed. Not a single American president has ever questioned the idea of US global leadership. Underlying this global leadership is Washington’s leadership in the Western world. When Trump talks about returning the greatness of America, he appeales to another model. This is the model of the “Shining City” on the hill, that by example outlines the direction and path, but does not force anyone on that road. Moreover, he does not want to be responsible for someone or something. But even in this situation we can not imagine that America will withdraw from NATO as an instrument of policy. Even the most radical revolutionary will not decisively break with the legacy of the twentieth century. Moreover, from a rational perspective it would be a big mistake for Washington. But the question of sharing the financial burden will not change. What is Europe to do? Despite fears of losing American support, the Old World is in no hurry to increase military spending. Hesitant voices sounded in recent days that hard times are coming and that they should fend for themselves in terms of security. After Trump, Europe is again thinking of building a European army with its own policy in the sphere of defense and security. And once again they decided it was pointless to duplicate the structure of NATO. But then NATO may not exist forever? There is the important question of what goals European defense policy will pursue. Besides the emphasis on Russia as a threat, other threats are so far not formulated. Trump calls on the alliance to reorient itself towards solving antiterrorist tasks.

But this military-political structure is not prepared to solve such problems. Russia is perceived as a threat on both sides of the Atlantic (Trump less so, but members of his administration completely). There’s a paradox that on the one hand, Russia should be restrained in Europe, and on the other hand used in the direction of the Middle East. Obama tried this policy and ended with a deepening degradation in relations between the two countries. If we continue Steinmeier’s thought that with the arrival of Trump ended the political 20th century, the fate of NATO’s future looks difficult. The alliance is an important legacy of the past century. It had a purpose against the Soviet threat. And now they have to show that the threat from Russia is on the same level as it was from the USSR. But it seems Moscow has no intention of becoming the terrible danger desired by the West. What Europe fears without NATO is clear – it will not step into the future, but in the past. With conflicts which until the mid-20th century periodically turned the Old World in an arena of violent clashes. The West’s attempt to freeze the beautiful moment at the peak of success and influence, ended adversely. Time will continue. Forward or backward.

Coming from a German – English heritage , I must say I am amazed at the apparent willingness of Europeans to stay locked into the European Union creation . While it made sense as a trade partnership , there is no element of democracy in its political formation . And the common currency , the “Euro” is a complete financial surrender for every nation with the possible exception of Germany , which seems to control its value . My amazement is even more pronounced about their disconnect over their waging war against Syria , and that this produces refugees. They are buying the American government line , that “we are fighting terrorism” , when in fact their governments along with the Americans , are supporting Al Qaeda and Al Nosra via Turkey and Saudi Arabia . Why is it that only the political right wing parties seems to be aware that living without borders is a failure . And Erdogan is to be stood up to , not bowed to . Letting the UK give Cyprus to the Turkish military , is the height of madness . What will it take for these people to stand up for themselves ?

off topic, but still relevant :