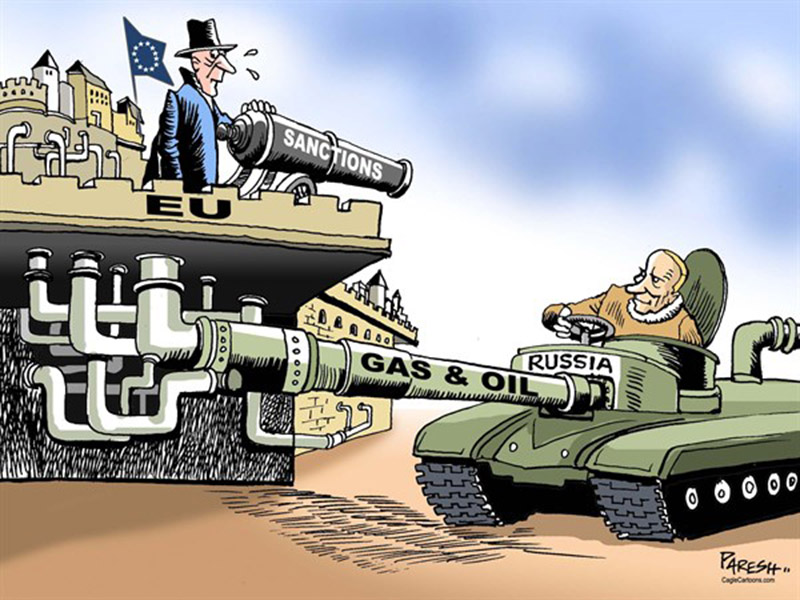 As the anti-Russian sanctions did not benefit anyone, Europe has no other alternative but to glorify its suffering of the consequences.

A few days ago, Radio Free Europe announced that the official representative of the USA, Adam Shubin, who is dealing with the sanctions against Russia, will visit Paris and Berlin on the 7th and 8th of June, aiming to “convince the European partners of how important it is to continue the sanctions against Russia.” According to the information from Radio Free Europe, Shubin will meet the ministers of Foreign Affars, Economics and Financing of EU member states as well as representatives of private banks and financial institutions. Another goal of the visit of the American envoy is to discuss with his European collegues “the continuous efforts of the USA in their fight against Iran-backed terrorism.” As a matter of fact, if the necessities and the benefits of these sanctions for the USA as well as for Europe were so obvious, there would be no need for the USA for such an aggressive campain. On the contrary, the anti-Russian measures proved that they are inefficient and harmful, including for America as well. Moreover, the market reality shows that the restrictive measures against Russia have weakened the dollar on a global scale.

The EU on its own is facing a number of existential problems, starting with the migrant crises, the volatile euro and finishing with the possibility of Britain exiting the EU. Therefore, the extension of the sanctions against Russia is just another destabilising factor in the economic and geopolitical setting, at a time when the crucial question of what Europe’s future is going to look like is being posed.

Realistically, the sanctions are a result of the involvement of Ukraine in an endless spiral of a state crisis, which happened thanks to the intervention of USA, and not that of Russia. An intervention that started at the end of 2013 and still continues. Instead of taking responsibility for the next failed American intervention, the USA chose to blame Moscow. However, according to a number of analysts, the support for the sanctions from Europe and the USA is not only a way to legitimise the swich in responsibility, but is of key importance for the future Western support for the Kiev regime. Not surprisingly, the ex Secretary General of NATO, Anders vog Rasmusen, was recently appointed as an advisor to the Ukrainian President, Petro Poroshenko. From this point of view, the persistent appeals of the USA for continuation of the restrictive measures against Moscow because of its intervention in Ukraine and the region, are more than political cynicism in action.
The American intervention in Ukraine destabilised the country and ruined its economy. Afterwards, the USA went on with introducing the sanctions used as a geo-political tool for settling debts with Moscow. Regretfully, however, this has a boomerang effect for Europe, which sacrificed its own peace and security and for the United States of America, and of course, to the largest extent for Ukraine, whose imported regime deliberately destroyed the industrial centres important for the country’s economy.

From a historical perspective, Russia and Europe maintain close economic ties not only due to their geographical proximity, but from obvious necessity. This includes interdependency in the space technologies, trade, defence and energy. That is why the geopolitical maneouvres of Washington aiming at destroying these relations are so costly to Europe. For example, the failure of the contracts for pipelines to supply gas to Europe, as well as the sale of French ships, ‘Mistral’, cost hundreds of millions of dollars to the French government. The truth is that even in the USA, opinions regarding the continued economic pressure on Russia are divided. The financial analyst, Tod Wood, who has got over 20 years’ experience of trading state bonds on Wall Street, believes that thanks to the sanctions, Russia and China have appreciated the opportunity to create and build trade relations between themselves, as well as to look for options to avoid the use of US dollars when signing contracts for petrol or any other goods that are usually traded in US dollars. According to Tod Wood, in a long term plan, this will seriously affect the American currency, particularly so if the USA does not resolve the problem with its accumulating state debt.

Against the background of the growing resistance of the state members against extension of the sanctions, the EU will have to decide next month whether it will take the direction of restoring the dialogue and trust with Moscow, or whether it will continue to behave as a regional troubadour of the USA. It’s quite possible, however, that if the European leaders do not reach a wise solution, Europe will become the classic confirmation of the proverb: instead of plucking eyebrows, to pluck one’s own eyes out.