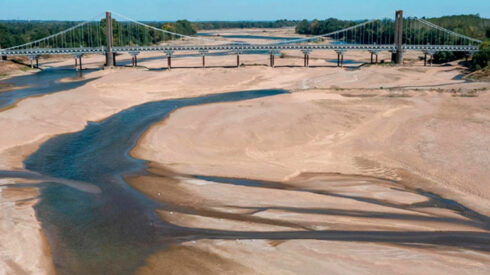 Scenes and pictures have been circulating of broken earth, lacking moisture, cracked and yearning.  But these are not from traditional drought-stricken parts of the planet, where the animal carcass assumes near totemic power amidst dry riverbeds or desert expanses.  Neither Australia nor Africa feature on these occasions – at least in a prominent way.  Europe, continent of historical arable sustainability, is drying up.

This is not to say that the continent is immune to drought.  The International Commission for the Protection of the Danube River notes the impacts of a number of dry and severe summers from the 1990s till 2015.  In 2015 alone, “drought phenomena” were recorded in countries from Austria to Ukraine.

What makes the current crisis in Europe significant is its scale.  According to the European Drought Observatory, 64% of the land in the European Union is being affected by drought, with 47% of the territory classed as having “warning” conditions, and 17% facing “alert” conditions.  The European Commission Joint Research Centre (EC-JRC) has gone so far as to warn that the current drought may be the worst in 500 years.

“Just to give you an idea, the 2018 drought was so extreme that, looking back at least the last 500 years, there were no other events similar to the drought of 2018, but this year I think it is really worse than 2018.”

The story, however, is the same across the Northern Hemisphere.  Deutsche Welle showed alarm in declaring that, “from Hungary to Hawaii, from the drying Rhine River to the now-recovering Rio Grande, or from Casablanca to California, summer droughts and high temperatures are having a serious impact on everything from agriculture to the freight industry.”

The German broadcaster then goes on to note the lowering of Lake Garda’s levels, and the observation from one tourist.

“We came last year, we liked it, and we came back this year.”  Unfortunately, the landscape had altered.  “We were a bit shocked when we arrived because we had our usual walk around, and the water wasn’t there.”

Across Europe, water levels in famed aqueous bodies have been falling and vanishing.  Italy’s River Po has fallen to such a level that rice fields can no longer be watered consistently, nor clams sustained.  In France, the warming of the Rhône and Garonne have made their water prohibitively hot to cool nuclear reactors.

Europe’s major waterways have been suffering a fall, producing colossal headaches for those involved in the transportation sector.  (The focus on economic matters has the effect of ignoring the more attritive consequences that climate change has for both environment and species.)  For countries such as Germany, which rely on suitably filled inland waterways, the signs are ominous, a point not helped by the ongoing problems with reduced delivery of Russian natural gas through the Nord Stream 1 pipeline.

The Rhine River has been so depleted that the standard number of vessels have been unable to sail with regularity and appropriate tonnage.  The Rhine Waterways and Shipping Authority (WSA Rhein) confirmed that the lower water levels would lead to the passage of fewer barges transporting petrochemicals and oil products.  Those that did could only make use of the river with reduced capacity.

For logistics wonks in the petrochemical business, this has meant sharp increases in costs, though a spokesperson for WSA Rhein tried to suggest that the “exceptionally low level” of water at this time of the year “was not significant.”  The German logistics company HGK also urges calm, suggesting that things are “not as dramatic yet as in 2018”.  The consultancy Elwis, which specialises in German waterways, disagrees.  Were the water levels to fall to 20cm by mid-August, nothing would be able to navigate along the Rhine.

A spokesperson for the world’s largest chemical producer, BASF, summarised matters with gloomy precision:  “The mark of 60cm of the Rhine has been undercut at Kaub.  Levels in the range of 35-55cm are forecast for the next two weeks.  For the predicted levels, some types of ships can no longer be used and will stop sailing; all others will sail with reduced loads.”  To alleviate problems with cost, the company has been resorting to alternative modes of transport, including rail.

Another astonishing European waterway – the Danube – is also diminishing, suggesting how climate change is, quite literally, altering landscapes and transport systems.  In Romania, Greenpeace activists tried to draw attention to the issue by dragging kayaks to a stretch of shoreline exposed by the retreating water.  “We want Danube waves, not heat waves,” the protests declared in their banners.

In less transport related matters, scenes of parched earth have been beamed across the globe from the UK, a country famed for its rather mild climate.  Parts of the country have experienced their driest July on record.  Hosepipe bans have been introduced, and one can almost hear Britain’s drought-hardened cousins in Australia: shower less and shower together.  Exacerbating the problem of decreased rainfall has been the unusually high temperatures, at times rising savagely beyond 40 degrees Celsius.

Globally, the earth is changing in violent, displacing fashion.  Climate change will cause displacements in the order of tens of millions, if not more.  Whole territories are vanishing, while other tracts of land are being exposed.  Nature is not just being reordered but doing much of the reordering.  What will humanity’s response be?

most of this just big lies to fool the idiot masses

Its not a lie, its weather engineering, obviously inflicted by own military. And its indeed to fool idiot. Proof beeing: not drought in Russia/Bielorussia (as far as i’aware)

“The weather, of course, works electrically in the context of the volative electrical environment in which the earth and everything else moves. So it is also nonsensical to assume that humans can influence the weather of the planet.

i for one welcome this “global warming” if its means that Russia can access more resources from it permafrost regions.

Florian Geyer
Reply to  i am confused

A few years ago the remains of a baby mammoth was found in Siberia many thousands of years after its demise. It is thought that the mammoth died after it got stuck in the mud of a long lost river bank that became permafrost.

The people that found it were in an area where the permafrost was thawing. They were looking for ancient mammoth tusks. Fortunately they informed the local government and the baby mammoth was removed and studied. The contents of the baby mammoths last meal was still intact in its stomach that showed a diet of grass and other wetland plants. It is thought that the deep mud protected the de facto grave from wolves etc.

Bigg Chungus
Reply to  i am confused

The Jews already have a plan to use this as an excuse for a war on Russia, because Russia probably won’t “share” its land with 100 million “refugees”. Seriously, there are academic papers already written about demographically reshaping Russia and Canada because of “climate change”.

The real reason there will be huge hordes of refugees, though, is that the Jews are already destroying Third World ecosystems with massive cash crop agribusiness, unsafe mining practices, and unsustainable urbanization, which is a consequence of neoliberal economic restructuring.

Dried up? Now can’t wait until it blows away.

More climate change fiction brought to you once again by the Globalists and their foot soldiers….

I wonder if the author bothers recycling the brown paper bag that cash reward came in?

Yay, gotta love the gloom and doom horseshit in this “opinion piece”. Earth goes through changes all the time, that is nothing new. When things heat up, its because our Sun is more active. When the Sun is less active with coronal mass ejections, things cool down a degree or two. Furthermore, NASA has noted that our planet is getting greener. I for one, am grateful.

This is another disgusting contribution that shows the true side of SF. None of this is true, except that it’s not raining much right now. Not even diagrams are shown to illustrate the data. SF is also part of the Semitistic man-hating canon, of course.

” The climate change” LOL, the desperate suggestion that there is a very specific unique change. Then the reference to the hate and state TV station “DW” as a reference is just ridiculous!

‘Climate Change’ is a hoax. It’s another scam designed for tax and control purposes. Greenpeace is now discredited. Even their founder doesn’t want to know them as they have strayed from the beaten path of science. They now take their lead from politicians and UN quacks.

I can remember much worse droughts in Blighty that went on for months. Maybe some native american’s will do another rain dance. That seem to work on one occasion in the past.

The one thing that does make a difference to our climate is the sun, which loonies with far too much money and time on their hands want to block out with poisonous chem trails and giant earth sun screens in space. If we follow the lead of these greedy, over-privileged fools, we are doomed.