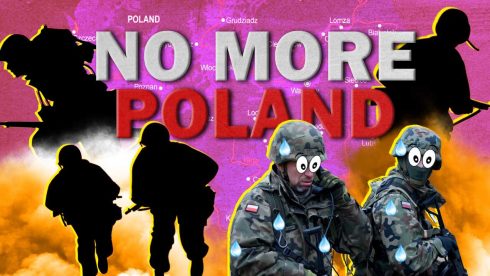 Polish Prime Minister Mateusz Morawiecki was repeatedly criticised on Tuesday during a tense session in the European Parliament in Brussels, with European Commission President Ursula von der Leyen warning Warsaw that its “direct challenges” against the unity of the bloc would not go unpunished.

“Your arguments are not getting better. You’re just escaping the debate,” von der Leyen said after four hours of frustrating debate with Morawiecki. She added that a ruling by Poland’s Constitutional Tribunal last week, which claimed that parts of EU law are incompatible with the Polish constitution, was “a direct challenge to the unity of the European legal order.”

In response, Morawiecki said Poland was a “proud country” and that threats of financial penalties from Brussels amounted to “blackmail.”

“I reject the language of threats, hazing and coercion,” he said, adding: “Poland will not be intimated.”

The European Court of Justice ruled against Warsaw’s establishment of disciplinary measures against Polish judges as it does not comply with the principle of their independence, thus once again instigating annoyance from Brussels.

It is recalled that at the end of last year, Warsaw and Budapest blocked the EU’s long-term budget and financial support package of over €750 billion. A compromise was finally reached with the allocation of funds, in accordance with the rule of law in the country, and was declared impossible until the EU Court decided whether such a mechanism is legal.

In another example, the European Court of Justice ruled that Poland was obliged to stop activities at the Turova mine and pay a fine of €500,000 per day to Brussels for non-compliance with the decision. However, Warsaw refused to comply with the order because it could harm the country’s energy security. At the same time, Warsaw hypocritically criticizes Berlin for the construction of the Nord Stream 2 gas pipeline despite its essentiality in securing energy for Germany.

It is also worth mentioning that Poland is one of the few EU countries that is completely orientated towards US foreign policy interests, often to the frustration of Berlin and Paris, and also often undermining European interests.

With this context, the Polish Constitutional Court took another confrontational step which undermines the entire EU legal system. According to local media, the Polish decision was continually postponed for a long time as they suspected Brussels would be outraged and seek retaliation – likely through a financial mechanism.

The problem is that this time Brussels must force the Poles to change their decision and not capitulate like they had at the end of last year. If Brussels were to capitulate again, a precedent will be established, which will effectively mean that EU laws will have no meaning and that the bloc’s authority is diminished.

Although many in the European Commission and other power centers like Berlin and Paris are evidently angered, Warsaw does not pay attention and has its own methods to counter any retaliations from the EU. The allocation of some billions to deal with the effects of the COVID-19 pandemic has not yet been approved, and Poland could slow down this process significantly if Brussels decides to apply pressure.

Warsaw could block various EU decisions, something that could undermine the bloc’s newfound attempt to achieve “strategic sovereignty” away from Washington. Brussels could try and deprive Poland of its right to vote in the EU. However, this is unlikely as it requires a decision by the Council of Europe, and it is likely that countries such as Hungary would not vote in favour of it.

In short, the EU’s confrontation with Warsaw could be a long affair with an unclear outcome, with both sides being able to retaliate against each other. Warsaw made a very serious challenge though and it is unlikely that Brussels will capitulate again to Polish pressure unless it wants to set a new precedent and reality that undermines the EU’s authority.

Who the fuck gives a shit about savage dirty troll looking poles and what gypsies thinks?

As a European, I care very deeply. And so should every honest person.

Sounds like a lot of theatre considering the polish president and his wife are both jewish and therefore likely zionist terrorist supporters.

Just take away the funds and no one will want to be member in the EU anyway. It’s simple as that. The EU is just a bunch of countries funded by the hardcore-EU members to sell out to them. They sell their sovereignty and their dignity to be ruled by a non democratic body who cannot be taken down in any known legal way.

The article leaves a number of things in the dark. It also tries to spin too hard against Poland since it’s perceived by Russia to be too US-friendly. 1) The EU is indeed trying to push legislation (e.g. on same-sex marriage, diverse sexualities) on Poland which is hardly crucial for Europe and should indeed fall under national responsability/jurisdiction. 2) Attempts have been made to jeopardize Polands energy independence, which is a problem. This can only be understood in the context of a NWO agenda, which aims to undermine autonomy of individual states 3) The hypocrisy is the EU’s since they, rightly, build Nord Steam 2, but deny the same freedom to what they deem to be ‘lesser’ members. 4) It would be good for Poland to seek closer integration with its eastern neighbours, despite understandable historical misgivings. It would be sufficient for Poland to have an associated status with the EU. Currently, however, a Polish exit is unlikely. 5) The EU’s efforts to “keep Poland in line” are not suitable or intended to reduce US influence. Despite French disaffection, the EU has essentially no independent foreign policy. Cf. the recent remarks by German minister of defence Ms. Kramp-Karrenbauer, saying that “we must make Russia understand that we’re ready to use military force” (in case of perceived Russian misbehaviour). Paul A.’s idea of Poland being chastised by a more independent EU is, unfortunately, illusional. 6) Both Germany and Russia need a raprochement that takes the concerns of Poland seriously and garantees its independence. That would be a major step in strengthening the Eurasian heartland. It is most understandable that Poland is wary, they will not bow to either German nor Russian hegemony again. It is for Germany and Russia to understand that cooperation would be a huge win for all countries involved, and a very meaningful step towards more independence from the “sea powers”, i.e. the US (and the UK).