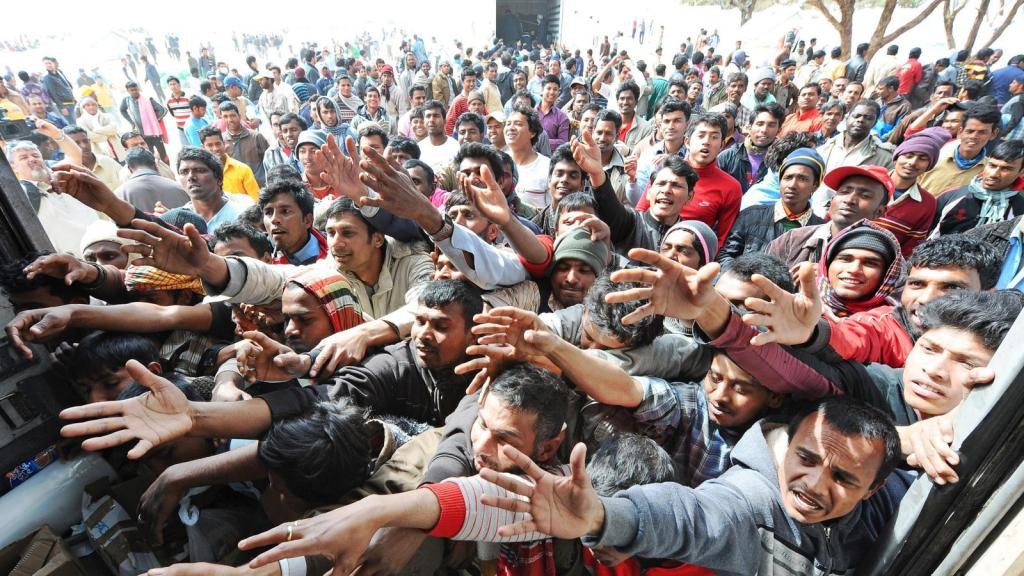 European societies and EU governments are torn apart by the refugee crisis. On the one hand, many people express in practical ways their solidarity with poor people risking their lives and sometimes dying, in their effort to find a shelter in Europe. On the other, many are very anxious of the repercussions such a massive influx will have on European societies. Sometimes, this “anger” takes barbarian forms, like when German citizens celebrate the burning of a building for refugees. Or it translates, like in Denmark, into a state policy of robbing them.

Both currents of the public opinion have in reality some point (we don’t speak of course about criminal offenses against refugees or immigrants). Refugees and immigrants deserve all our solidarity, if we wish to remain humans. Especially as we supported, or did not oppose enough, military interventions in their countries which made them refugees (or the economic and “climatic” policies which turned them into immigrants). Still, is it really a solution, for them and for us, to have half of the Middle East and Africa emigrate into Europe, in order to avoid the consequences of the disasters we helped accumulate in their countries? We contributed very much to destroy them, are we going now to complete the process with the emigration of their best educated and more active citizens to Europe? What is the right solution to this difficult problem, which is already threatening cohesion, if not the very existence of EU?

It is obvious, in the same time, that both the refugee crisis and the terror threats, and also the generalized confusion about the roots of those crises and possible ways out, are used to influence in a radical way European politics, by the very same totalitarian forces, like Neoconservatives and their allies, which are mainly responsible for creating them. Especially by engineering military interventions in the Middle East, through their influence in the US, French, British and other states and governments. Who could have imagined, only some months ago, that a country like France, the motherland and the symbol of European Liberty, during the last few centuries, would enshrine martial law into its Constitution?

To face the situation, without being destroyed in its fundamentals and keeping its cohesion, unity, possibility of independence, but also its own democracy, Europe has to do two things in the short run. First, organize the accommodation for people having already crossed its borders and do it in an equitable and just way between EU members. Second, exert the necessary pressure on Turkey to stop the influx of refugees into Greece and help them where they are now, as long as conditions for safe return to their countries do not exist. Such a policy is now absolutely necessary. Still it is not enough.

We need also to reverse radically course in the Middle East. We need to stop destabilizing any independent Middle Eastern power, we need to help immediately stop the war in Syria, we need a massive economic help to permit the reconstruction of the countries we demolished or helped demolish. In the long run we need also to exert the necessary pressure for a solution to the Israeli-Palestinian conflict.

Many people will say that all that is nice but unrealistic, “utopian”. Ok we can try to avoid such policies. But we should be conscious of the real alternative. And the real alternative is to import into Europe the Middle Eastern chaos, permitting, in the same time, to the very same forces they provoked it to continue their destructive work (and in reality to impose their regime) in our continent.

He said the question would be, “Do you want the European Union to prescribe the mandatory settlement of non-Hungarian citizens in Hungary even without the consent of Parliament?”

They are migrants, NOT refugees. They pass through many safe countries and do not claim asylum. They leave the safe, large and Muslim country of Turkey. Even many of the genuine Syrians were living and working in Turkey for years – and receiving benefits – and some growing their families.

One can see from their condition that they were all eating and shopping well wherever they came from. They have smart phones, decent to even name-brand clothes, shoes, backpacks, etc. They look well-fed and most are military-aged men who are often muscular and looked to have been working out or been physically active and had the nutrition and foot to build up their muscles. They do not have any scars or injuries of being “collateral damage” nor of having being kidnapped, abused and starved. None of them look war weary nor deprived as you’d expect genuine refugees to appear.

Europe should deport them. They are useless and have nothing to offer except sponging of welfare and crime.